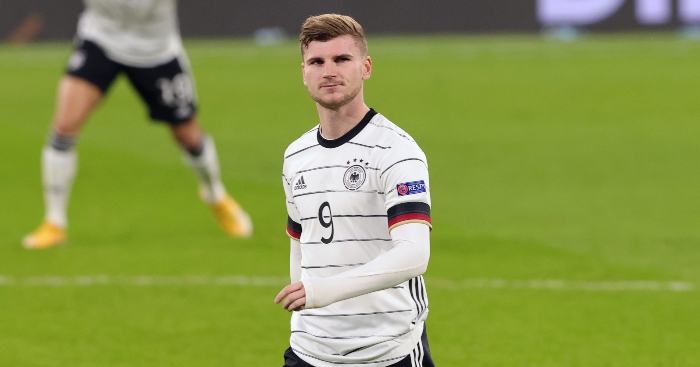 Chelsea’s Timo Werner maintained his excellent goalscoring form, while Lionel Messi gave us yet another reminder of his genius.

Even by Vidal’s high standards, this is impressive.

Arturo Vidal scored both goals in Chile's 2-0 win over Peru.

This one was unstoppable 🚀

The poor defender looks so confused.

Memphis Depay does the same skill as Grealish better in #NEDBIH but you won’t hear about it pic.twitter.com/oiz915XiE8

Liverpool fans will be just be relieved that he’s not injured.

There’s no stopping those.

Mendy is enjoying a brilliant start to the season.

Another game, another superb save from Edouard Mendy. 🇸🇳

Timo Werner has now scored in each of his last five appearances for club and country:

We can’t think of anything worse.

USA international Weston McKennie stubbing his toe in the post-match interview is outstanding. We’ve all been there pic.twitter.com/V7tQsxWp33

We don’t know what we were expecting but it wasn’t this.

San Marino Vs Gibraltar is what Saturdays are ALL about! Some save this too! pic.twitter.com/COmehG7fhN

Just wait until the end…

After all this time, Messi still manages to surprise us.

Sierra Leone rises from the ashes to make it 4-4 against Nigeria, after being 4-0 down early on. What a comeback!#NGASLE #AFCON2021Q pic.twitter.com/D2b7TIGzMY

*Buy Kevin De Bruyne and thousands of other players on Football Index. 18+, UK and Ireland customers only, begambleaware.org. T&Cs apply.

What’s it like to be the world’s leading Sven-Goran Eriksson impersonator?