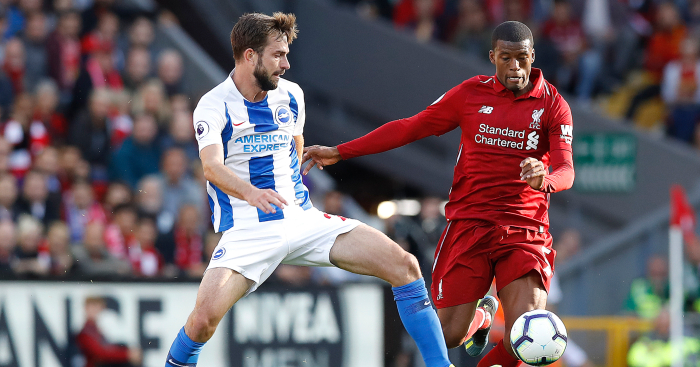 Liverpool and Chelsea midfielders caught our eye in the Premier League over the weekend, while there were some great goals scored across Europe.

Liverpool, Chelsea and Watford all maintained their 100% starts in England’s top division as hopes continue to rise of a closer title challenge this season.

Elsewhere, Cristiano Ronaldo missed a sitter to open his account in Italy, while Mahmoud Dahoud scored a goal in Germany we’re still trying to work out now…

Wijnaldum completed 99% of his passes in Liverpool’s 1-0 win over Brighton on Saturday, but it was something rather more showy which caught our eye. Why can’t all dribbles be like this?

Lovely by Gini Wijnaldum this👌🏻 pic.twitter.com/6zVkGL3npG

A goalkeeper embarrassing an onrushing attacker is one of the best things in football. So good, in fact, we wrote a 1000 words about Alisson doing it to Anthony Knockaert. 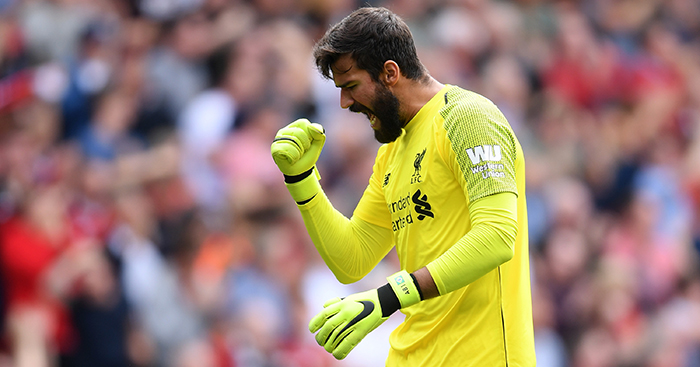 We love Ronaldo, but we couldn’t help but laugh at him making a complete hash of scoring an open goal and then still getting annoyed when Mario Mandzukic did it for him.

This is how you do it, Cris.

Pjanic: “I am very happy to remain at this wonderful club, so I dedicate the goal to the fans, my teammates and the club. I have improved so much in recent years and it is thanks to my experience here. I thank everyone for their support and help.” pic.twitter.com/EUgYcUo3vH

We enjoy a diving header at the best of times, but this was just ridiculous.

Diego Simeone might be a hugely successful football manager, but he’s still a proud dad.

What a beautiful scene with the Simeone family 💜 pic.twitter.com/snCMFPQRVZ

This is why we watch football.

The new main man at Real.

Yes, he’s a shithouse, but you can’t knock this.

Sergio Ramos has scored in each of his 14 LaLiga seasons with Real Madrid. 😳 pic.twitter.com/V0pZyOJzHz

This is the seventh tier FFS.

Our 2018/19 goal of the season competition is now closed.

If you haven’t already seen it, Owen talking about his injuries is a must-watch. “Once I did it (my hamstring) once, I was gone really.”

In case you missed the #PLTonight moment everyone is talking about 👀

Michael Owen talking through his injury troubles and the twilight of his career was a fascinating watch.pic.twitter.com/bEnm8qSMCO

Harry The Hornet recreating his dive two years ago Hahahahaha this man is a legend. Have some of that Roy. #MyMascot pic.twitter.com/8feArhZa2L