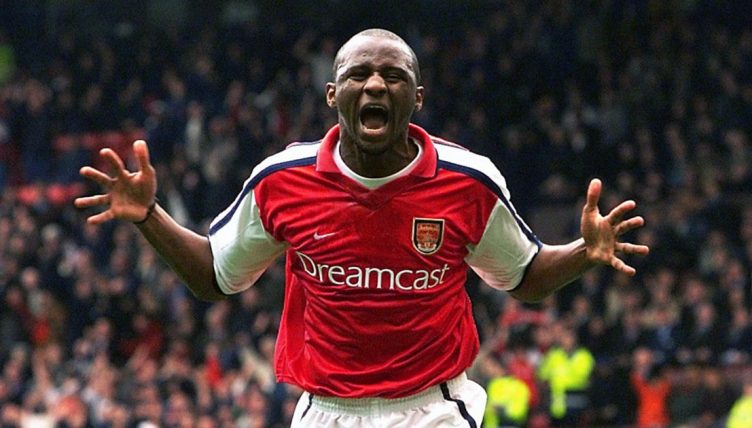 Patrick Vieira won the Premier League, FA Cup, Serie A, World Cup and European Championship during his playing career – and even the respect of Roy Keane.

Vieira is regarded as one of the best midfielders ever to have played in the Premier League and will always be remembered as the captain of the Arsenal side that went an entire season unbeaten.

And here is what those who knew him best had to say about his incredible talent –  including, of course, Roy Keane.

“If it had come to a fight, Patrick could probably have killed me.”

Patrick Vieira being offered out by Roy Keane in the tunnel before the game remains a golden moment in Premier League folk law. We miss these two. pic.twitter.com/8HYjMVwvYO

“We both had that winners’ mindset… If anyone knew that, it was Patrick Vieira. He’s the type who gives one hundred percent in every situation, and I saw how he boosted the entire team.

“There aren’t many football players I have that kind of respect for.”

“He is the umbilical cord between the team and the fans.”

“There wasn’t anything he couldn’t do, and he was hard as nails as well.”

“I talked to Patrick in fluent French and before a game I asked in French, ‘could you speak a little bit of English to me?’. He nodded and said ‘Tottenham are s**t’.”

“I used to look forward to playing him because he made every one of us raise our game. Arsenal had a great side, but I firmly believe without him they would’ve been 25 per cent weaker.”

“He didn’t hide from anybody, and the more you gave him, the stronger he became.”

“I don’t think we’ll ever be bosom buddies buying each other a drink in the pub, but out of everybody I ever faced as a player, he drove me to become better.

“Obviously Arsenal were the team that really challenged Manchester United and, for a short time, went past us. And as their leader Patrick was immense.

“Without doubt I’d put him alongside (Zinedine) Zidane, (Paul) Scholes, (Steven) Gerrard and (Frank) Lampard as one of the very best I’ve ever played with or against, he was that good.

“On his day, when he was driving Arsenal on with the sheer force of his personality, he was unplayable.”

“I was young when I played Patrick (and Roy Keane), and they bossed me. I remember I was a young boy, Patrick kept knocking it over my head.”

“A monster, his partnership with Emmanuel Petit was as good as anything we have seen. His performance against Liverpool in the 2001 FA Cup final stands out. He was magnificent and didn’t deserve to be on the losing side.

“In the dressing room afterwards, everyone kept saying: ‘how good was Vieira?’ Steven Gerrard still talks about that game as Vieira made him realise he had to climb a few more levels to reach the top.”

“Two players in one. He has tremendous physique, but also sophisticated technique. And, what is very important for a modern midfielder, he has the goleador [‘goalscorer’] instinct.”

“(A) leader and natural-born winner. He has everything you could want from a midfielder. He can attack, defend and score goals. He’s brilliant at taking the ball in tight spots in the middle of the park and starting attacks.”

“You look at Dennis Bergkamp and you look at Thierry Henry and people say they are great players and rightly so. There are statues of these guys outside the Emirates Stadium, but without Patrick winning the ball and giving it to them they would almost be redundant.

“Sometimes during the week it was as if his non-football playing brother turned up for training instead, we used to call him Mr. Floppy, but on a match day he was a different animal.”

“He’s a winner. He just oozes that. Everything used to hurt him, but he got through it to get out on the pitch. He would play through anything and it was a real pleasure to play alongside him.”

“He is a legend. Playing with him was very easy, and he was the kind of guy you learn a lot from while training with him. He was a fighter, and you need that fighting spirit because not every game is going to be easy.”

“Not a lot of players in the history of the game compare to Patrick.”