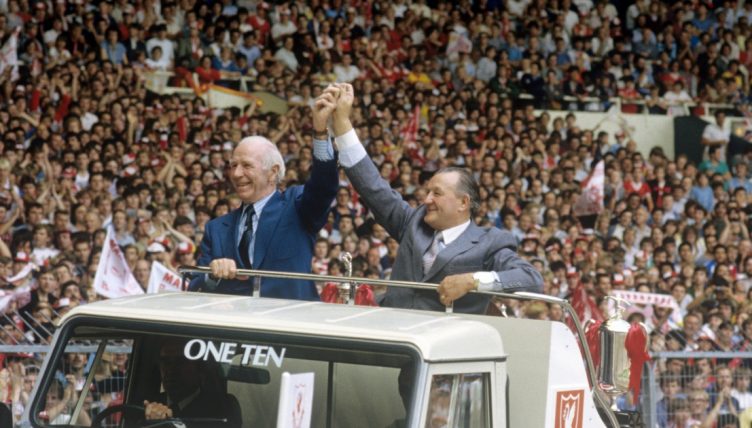 Bob Paisley had to be persuaded against his will to replace Bill Shankly as Liverpool manager, but the former soldier went on to become the most successful boss in the club’s history.

Winning 20 trophies in nine years, Paisley “took Liverpool to another level” as Graeme Souness told the Daily Mail, but the former Reds captain suggests the manager “does not get the credit he deserves”.

Paisley was a man of few words in public, but that didn’t stop him coming out with some brilliant lines when he did speak.

Speaking in 1950, while he was still a player: “Believe it or not the most thrilling experience of my life has nothing to do with football. It was the unforgettable sight of Vesuvius in eruption while stationed near Naples during the war.

“The most pleasurable experience is a football one and came when I won an Amateur Cup Final with Bishop Auckland in 1939.

“Though I hope to have a few more seasons still in senior football, I am studying to be a physiotherapist and masseur when my playing days are over. We married men have to look to the future, you know.”

“I said that when I took over that I would settle for a drop of Bell’s once a month, a big bottle at the end of the season and a ride round the city in an open top bus!”

The art of goalscoring

“If you’re in the penalty area and don’t know what to do with the ball, put it in the net and we’ll discuss the options later.”

Winning the European Cup in Rome, 1977

“This is the second time I’ve beaten the Germans here… the first time was in 1944. I drove into Rome on a tank when the city was liberated.

“If anyone had told me I’d be back here to see us win the European Cup 33 years later I’d have told them they were mad! But I want to savour every minute of it… which is why I’m not having a drink tonight. I’m just drinking in the occasion.”

“The whole of my life, what they wanted was honesty. They were not concerned with cultured football but with triers who gave 100%.”

After Bill Shankly spent the first Saturday of his retirement at Goodison Park as Liverpool were away at Luton, Paisley quipped: “He’s trying to get right away from football. I believe he went to Everton.”

“This club has been my life. I’d go out and sweep the street and be proud to do it for Liverpool FC if they asked me to.”

“A lot of teams beat us, do a lap of honour and don’t stop running. They live too long on one good result. I remember Jimmy Adamson crowing after Burnley had beaten us once, that his players were in a different league. At the end of the season they were.”

“Other people have earned more money than me in football, but no-one has enjoyed it as much as me.”

My mate Simon took us on a detour on our walk home from school, knocked on the door and this old gentleman came out from his Woolton bungalow, Was amazed to see Bob paisley standing there, he signed all our school books told us to be good lad’s asked about us we said bye legend

“Newspapers remind me of Jaws. They’ll consume anything you’ve got and be back for more the next day.”

“It’s not about the long ball or the short ball, it’s about the right ball.”

“We have a marvellous backroom team at Anfield who share the workload wonderfully well. No club has a more able and closely-knit staff than ours.

“The Anfield boot room has become legendary, and we have a full and frank exchange of views in there in a leisurely atmosphere every Sunday morning. It’s just like popping down to the local.”

“I’ve been here during the bad times too – one year we came second.”

Today at Anfield @LFC will celebrate the centenary & the life of #BobPaisley who was born 23rd Jan 1919-he dedicated his life to #LFC as a player, a Boot Room legend & then finally a brilliant manager – photographed with old friends in his birthplace Hetton-le-Hole #QuietGenius pic.twitter.com/mirmppJ7nF

“One of the things I keep reminding players is that when you’re lost in a fog, you must stick together. Then you don’t get lost. If there’s a secret about Liverpool, that’s it.”

“The only games we can afford to lose are in the Central League because our reserves have already won that.”

“I just hoped that after the trials and tribulations of my early years in management someone up high would smile on me. My plea was answered when we got Kenny Dalglish.”

Getting your point across

“Ranting and raving gets you nowhere in football. If you want to be heard, speak quietly.”

“I love the city and the people here. I’ve been with them for many years and I fought alongside them. Ninety per cent of the regiment were from the Merseyside area. So I got to know the Liverpool character.

“From a psychological point of view, that was a big asset. I’ve had a fair time to judge the Liverpool people and I think they’re tremendous.”