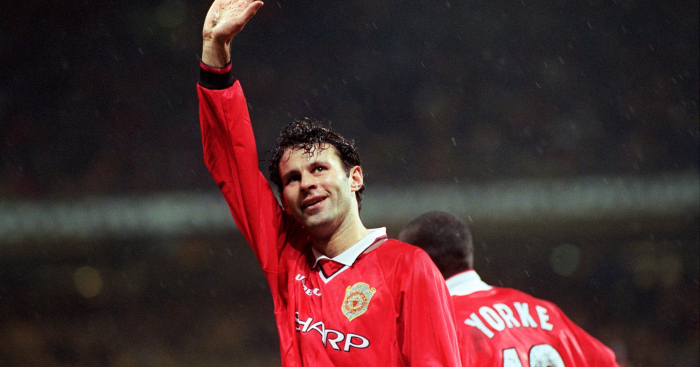 It’s hard to sum up Ryan Giggs’ Manchester United career – so we’ll leave it to those who know much more about football than us.

Giggs really did win it all with United, and his remarkable longevity at a single club has rarely been matched in the modern era.

We’ve taken a look at 17 of the best quotes on Giggs from some of the biggest names in the game.

“Eric Cantona is a great player, but he’s not as good as Ryan Giggs.”

“It’s almost impossible to replace a player like Ryan Giggs – you do not find many players like him. He is a rarity. He has world class attributes and has achieved so much at one club. You can only look up to him.”

“Maybe one day people will say I was another Ryan Giggs.”

“There’s no way that Ryan Giggs is another George Best: he’s another Ryan Giggs.”

“Like Best, there is a special fantasia about him”

“I stood still, and it was like slow motion in and out, gliding in and out. He’s like a gazelle. He had this grace about him and he was making body movements without even touching the ball and Lee Dixon went wrong, Martin Keown went wrong. I just saw him going through going through…that was Ryan Giggs; that was what Ryan Giggs was all about; this was Giggs’s moment.”

#OnThisDay in 1999, Ryan Giggs intercepted Patrick Vieira's pass inside his own half in the FA Cup semi-final.

“There will never be, in my opinion, somebody who is going to play at that level from the age of 17 to 40. It’s quite unbelievable”

“If he was French, Pires or myself would have been on the bench.”

“Only two players made me cry when watching football, one was Diego Maradona and the other Ryan Giggs.”

“The first time I saw Giggsy, he was playing for Salford Boys against United’s apprentices. He was thin and wiry but he just glided past four of our apprentices as if they weren’t even there, then he put the ball in the back of the net. I just thought, ‘This kid’s an absolute natural.'”

“Ryan makes you believe there is a football God.”

“When Ryan runs at players he gives them twisted blood. They don’t want to be a defender any more.”

“Giggs is the detonator, the man who can make Manchester United explode”

“When I arrived, he was playing. Now, 15 years after I retired, he’s still playing. It’s crazy.”

“A young Giggsy was like a Ballet Dancer. I had never seen a young player like that and I had seen the Busby Babes”

“He has the most talent than any other football player. He is delicate and dynamic. He is the player chosen by God.”

“Giggs is football itself.”