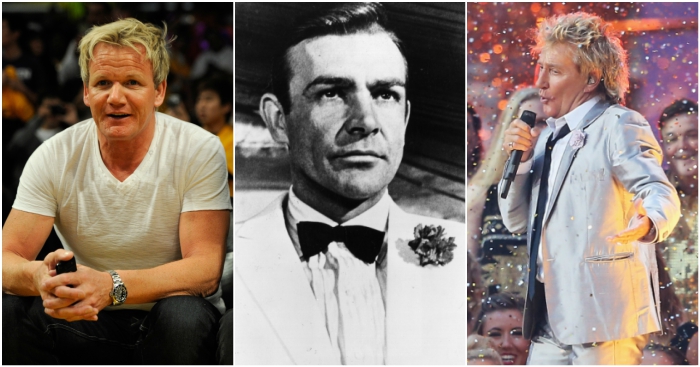 From athletes and actors to musicians and gladiators, from Manchester United and Manchester City to Witham Town and Lewes, so many celebrities have a hidden footballing past.

And, perhaps surprisingly, the early lives of many famous names could have taken very different turns.

The famous James Bond actor played as a youngster for Bonnyrigg Rose, choosing acting over a professional career in the sport.

Aged 23, Connery was scouted and offered a contract by Manchester United manager Sir Matt Busby, but turned it down to stick with acting, believing his career would be over by the age of 30.

Prior to his travels through space and time, Smith grew up expecting to forge a career in football, listing Northampton Town, Nottingham Forest and Leicester City as clubs he played for as a youngster, but a serious back injury led him to our TV screens.

Having played for Warwickshire under-14s aged 12, Ramsay went on to have a trial with Rangers in 1984, but his hopes of a contract were dashed when he smashed his knee cartilage during training.

These days we’re not sure whether it’s best to call him a TV chef or a professional shouter.

Despite choosing cricket as a career, Botham still went on to appear for Yeovil Town and Scunthorpe United, featuring 11 times in the Football League for the latter.

Iglesias played in goal for a number of clubs around Madrid, including Real’s Castilla (B) team, before a car crash permanently weakened his legs and his career as a footballer was over.

In the hospital, however, a nurse famously handed him a guitar, leading to the discovery of his talents for music.

As a 16-year-old, the legendary guitarist had trials at Manchester City and interest from Brian Clough at Nottingham Forest.

“I didn’t take football seriously enough to push it to the next level,” he said. “I’d go for a trial and take to the pitch wearing eyeliner.”

Prior to his brief stint in the spotlight as a member of So Solid Crew, Michael Harvey played non-league football for AFC Wimbledon, Aldershot Town and Lewes.

Nowadays, as does every naf noughties celebrity, he tends to flitter around reality shows such as Celebrity Big Brother and Celebrity Come Dine With Me. But we all still love this banger, right? Right?

Winning four world records and two Olympic golds wasn’t enough to keep Thompson happy when he was forced to retire from athletics in 1992.

He went on to play professional football for Mansfield Town and Stevenage, as well as featuring for Ilkeston in non-league.

In 1994, two years after becoming a Gladiator, Wolf – who is in fact a real human – appeared for Gillingham in a reserves match against Cambridge United.

Oh, and to ruin the illusion even further, his real name is Michael.

Trials at Brentford as a teenager proved unsuccessful, and it could be said Stewart went on to lead a decent musical career.

Thankfully we got to witness the highlight of his footballing career in 2017.

A talented youngster, Becker was given the chance to join Bayern Munich’s youth system at the age of 12, but opted for tennis instead.

Prior to his success on X Factor, Murs played semi-professionally for Witham Town before an injury forced him to quit the game.

His fame, however, now knows no bounds, as he is the only person ever to have appeared twice on iconic game show Deal or No Deal.

Training with West Ham’s youth system in the 70’s, Harris aspired to be a professional footballer before discovering rock music.

On Christmas Day in 1975, Iron Maiden was born. He definitely made the right choice.

Tofik Bahramov started a footballing career in his native Azerbaijan before an injury led him to officiating.

England fans probably owe whoever injured him a pint.

Playing for a number of clubs around Malaga and dreaming of becoming a professional footballer, Banderas broke his foot aged 14, meaning we were treated to his exceptional performance as Puss In Boots in Shrek.

Farrell’s father and uncle both played for Shamrock Rovers, and the actor could have too before a penchant for drugs took over his late teens.

Royle Family actor Little has a list of non-league clubs that Steve Claridge would be proud of, turning out on the football field when his career allows it. Little most recently captained micronation Sealand’s team in 2013.