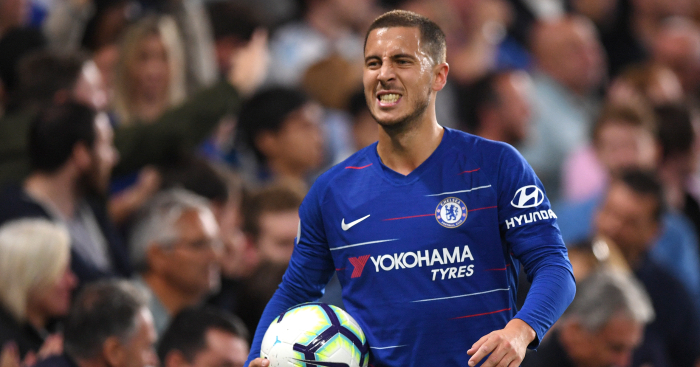 Chelsea, Liverpool and Arsenal men all caught our eye in action this weekend.

Maurizio Sarri and Jurgen Klopp’s men continued their unbeaten starts to the Premier League season with a draw in the big game of the weekend – but there were plenty of highlights elsewhere.

We’ve rounded up the best moments on and off the pitch.

A silly goal, quite frankly.

The Belgian scored a brilliant goal himself in Chelsea’s draw with Liverpool and also had some nice words for his former team-mate Sturridge: “Maybe he’s trying to be like me.”

A late winner followed by an even later straight red card. A good afternoon’s work, Robin.

We’re not actually sure if this is real life or FIFA.

Wayne Rooney and D.C. United control their own destiny in the MLS Cup playoffs race after rolling to a 5-0 win over Montreal. pic.twitter.com/oqlNeRLX5k

We’re getting excited. So should you.

Jadon Sancho is so, so special.

What an assist just SEVENTY seconds after coming on as a sub for Dortmund. Incredible counter-attack.

The hype is real 🔥 pic.twitter.com/jeGbhxahyh

The childhood friends completed one hell of a journey when they faced off in Arsenal’s clash with Watford.

Played together since we were 8 years old. We used to 1v1 in his grandmas garden for hours. Yesterday together on the same pitch in the @premierleague. Life is amazing. @MarcNavarro7 pic.twitter.com/odLLVsApKt

The Bolton winger celebrated his winner against Cardiff by running straight to Stephen Darby, who has had to retire after being diagnosed with motor neurone disease.

📸 A picture paints a thousand words 💙

When Chris Kamara asked the former Leicester City defender how they won the title with that back for, Huth had a simple answer.

No, not that one. We don’t remember that Nuno Valente scoring goals like this.

Our Rob, a Leeds fan, thinks this goal should have been ruled out because it was “unfair”.

Rob is happy enough for this one to stand, however.

A referee taking out three players in one go? Yes please.

Worth a watch for the look on the cheerleader’s face alone.

This is the greatest 20 seconds of football I have seen in my life. Just beautiful. pic.twitter.com/JGGdCrPcsh