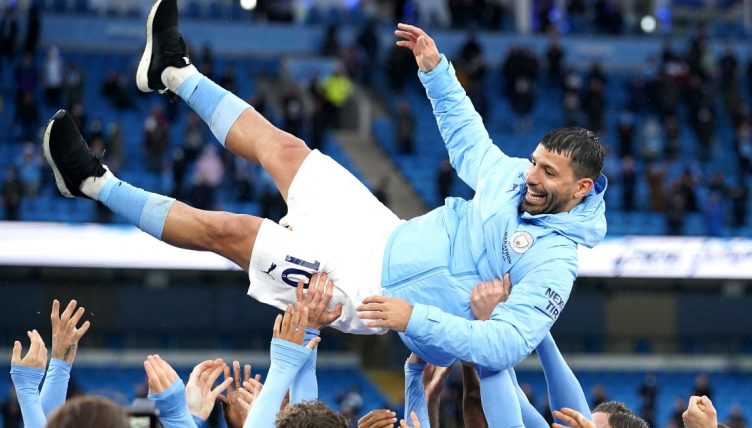 After a strange and eventful season, Europe’s top five leagues all came to an end over the weekend amid plenty of drama.

A fitting tribute to one of the Premier League’s greatest ever players.

Sergio Aguero given a guard of honour by his Manchester City teammates 💙 pic.twitter.com/OuDGqTBt8h

De Bruyne is clearly not a big fan of interviews.

De bruyne being told he’s needs to do an interview! 😂 “aww For F**k’s sake!” @ManCity pic.twitter.com/XlNlGIdnPU

Pablo Hernández tears up as his name rings out around Elland Road, lovely touch 🥲👏 pic.twitter.com/YcGYOYI5Y7

You can’t put a price on those numbers, can you, Daniel?….

A senior debut for the exciting Manchester United prospect, and we might be seeing a few more of these nutmegs over the next few years.

And now they can celebrate! 🙌

What a signing, what a player.

Just look at how much it means to Luiz Suarez! 🙌

A LaLiga champion once again 🏆 pic.twitter.com/GqoKONWScq

Jan Oblak is out on the streets celebrating with fans 😂

Griezmann is finally rediscovering his best form at Barcelona.

A record-breaking 41 goals in 29 Bundesliga games. That is just ridiculous.

How do you mark you last game as a #Bundesliga referee? 🤔

Forget about Zlatan Ibrahimovic, it’s Ellison who is proving that age is just a number.

Nothing to see here except a man born in the 1970s scoring in the play-offs in the 2020s. Astonishing. pic.twitter.com/EZxztwCJG4

Alves will struggle to find room in his trophy cabinet.

Dani Alves adds his 41st trophy to his cabinet at the age of 38, the most decorated player in football history. pic.twitter.com/SguZtAYCDu

Actually, we take that back…

A strange end to a strange season.

Gabriel lost his tooth during the Arsenal post-match celebrations and is out here in the rain looking for it. #AFC staff members are also helping him! #ARSBHA pic.twitter.com/NEepRtKfDK

Watch: Pep Guardiola breaks down in tears while paying tribute to Aguero