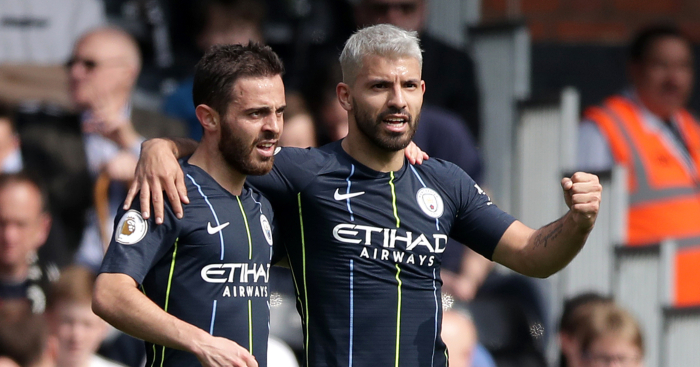 Another week, another Lionel Messi masterclass.

We honestly don’t expect to include Messi every week we compile these, but then he goes as does what he does and we can’t not include him.

Still, there was plenty of excitement elsewhere, and we’ve rounded up some of the best of the action on and off the pitch.

His Panenka free-kick was f*cking daft. As is the fact he’s now scored 40 or more goals for 10 seasons in a row. As was this dribble. Lionel Messi is f*cking daft.

This is also f*cking daft.

Aguero now has scored same number of goals for Manchester City (228 in 328 games) as Henry had for Arsenal.

He has done it in 48 fewer games. pic.twitter.com/gePKPMviBM

There’s only 30 seconds gone, you’re playing Milan and Gianluigi Donnarumma has just gifted you a goal. Do you a) offer an embarrassed smile and raised hand before walking back to the halfway line or b) leap over the hoardings to celebrate wildly with fans? Choose B. Always choose B.

He’s now the first player in Bundesliga history to score five or more goals in the 90th minute or later in one season.

Another assist for the main man.

By scoring this beauty, Benzema has now netted against all 34 La Liga sides he has faced for Real Madrid.

He scored later with a Panenka, but we really wish this went in.

Oh well, at least this happened in Mexico.

This isn’t the Diego Costa we remember.

*This* is how you complete your hat-trick.

You KNOW how this one ends. pic.twitter.com/ECjHOx8tDS

This is now one of our favourite things we’ve seen on a football pitch.

When people ask what car we drive, we say “less of a Ferrari”.

"Man City are a Ferrari – Liverpool are, I wouldn't say a Ford Mondeo, but not a Ferrari"

Tweets we never expected to see.

Does someone have a streaming link for Portsmouth-Sunderland? Thanks

The Liverpool loanee managed to avoid getting sent off for flooring Scott Brown with a punch to the face and also scored this beauty.

Neil Warnock's stare down with the officials at full time 😨😨

Glad we're not the referee or linesman right now 😬 pic.twitter.com/026qLMpgL5