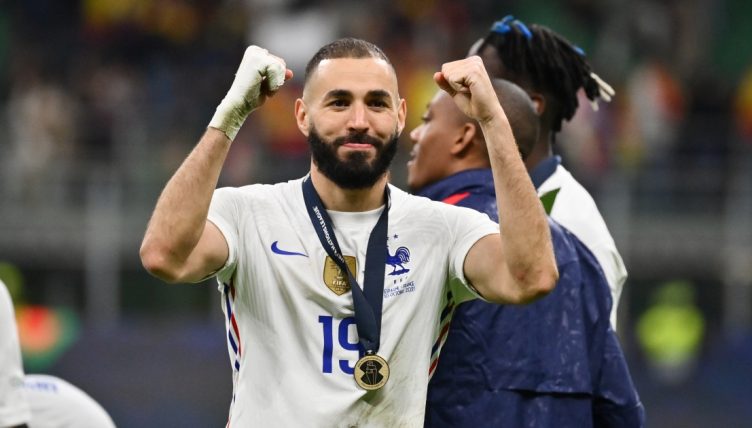 France came from behind to beat Spain in the UEFA Nations League final, while England moved another step closer to World Cup qualification.

Benzema is currently in the form of his life.

Watch as Oyarzabal puts Spain 1-0… only for Benzema to equal the scoring minutes after with a moment of brilliance! 😮

What were you doing at 17? In fact, don’t answer that…

Gavi's game by numbers vs. France:

Forgot about his two assists, we just want to watch this nutmeg from Sancho.

Messi managed to make this look so easy.

Look at Lionel Messi, how he managed to take out the ball from that crowded space and pass it.

Ultimately resulted in Lautaro Martínez goal, the third one for Argentina against Uruguay. pic.twitter.com/l6psoiFEat

After a difficult 2020-21, Mane has been rediscovering his best form this season.

Sadio Mane banging one in for Senegal there pic.twitter.com/3eRcbyfNLY

Not bad for someone who can only pass sideways.

Broja now has three goals in his three games for Albania.

I am still shijojing, we’re going to the World Cup baby in Broja we trust pic.twitter.com/yfcLuV0rDp

It’s easy to forget just how young Saka is.

He came up against someone 20 years younger than him and it really showed.

Nine months ago, Sorba Thomas was playing for Boreham Wood. Last night, he made his debut for Wales.pic.twitter.com/b8Hqfn4Y0E

Something undeniably funny about dives that go spectacularly wrong.

Sorry, Wales fans, but this is objectively hilarious.

The Leeds United forward is enjoying his first taste of international football.

Raphinha, we have not seen this type of gravy on the right wing for years 🔥pic.twitter.com/WeaBiyvnNS

Watch as @MarcusRashford receives his Honorary Degree from the University of Manchester 🎓❤️ pic.twitter.com/9eowtzRd48

I don’t know what it’s like to be racially abused but I have close friends and teammates who have been, so if there’s anything I can do to reach a different audience and make people more aware then that’s the least I can do to try and help on this issue. #BlackHistoryMonth https://t.co/Hr3s3IOoyZ