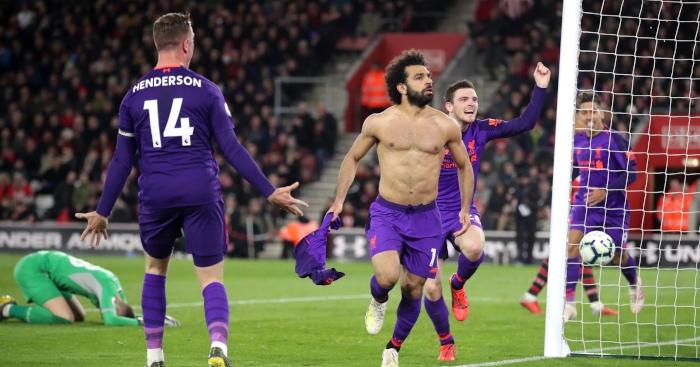 Is it just us, or was this weekend a bit mental?

The Bundesliga exploded with goals, and brilliant ones at that, while Watford beat Wolves in a thrilling FA Cup semi-final and Liverpool returned to the top of the Premier League in a dramatic encounter at Southampton.

Yeah, his goal was good, but we preferred him dummying Jordan Henderson and Andrew Robertson with his celebration.

Salah is a Savage. See what he did to Henderson and Robertson 😂😂😂 pic.twitter.com/8PjmjTLQLK

We really wish we were given that piggyback.

Mane and Keita ❤️❤️ the relief on Keita’s face 😭❤️pic.twitter.com/nKRgZkwRy6

Sure, Leverkusen may have ultimately lost 4-2 to RB Leipzig, but f*cking hell.

Unlike Havertz, Sabitzer did end up on the winning side.

A late winner for Juve against Milan, Kean is The Man right now.

If he wasn’t the best goalscorer on the planet, he’d be the best playmaker. Shame Jordi Alba couldn’t finish it off, mind.

Sky needed to get Carra and Neville down the pitch to interview Ralph Hasenhüttl without any dead time. Their plan didn’t work.

This needs an MNF analysis of its own!

As bizarre as it is perfect.pic.twitter.com/SJ3azbUgPY

No, we don’t know what Dortmund are playing at either.

Love this! @BenFoster when asked what he would do if he was picked for the @EmiratesFACup final:

"I’ll absolutely refuse! @hdgomes deserves it and should play without a doubt. He has never let this club down and never will. He was fantastic today." pic.twitter.com/2fxhIda3ch

Chelsea fans are getting excited about another of their loanees.

Reece James is what we miss in our midfield and the scariest part is dude is a certified monster at RB #cfc bring him back pic.twitter.com/sA4vLUeMYC

After their game at Bolton was almost postponed due to an IT failure at the stadium.

10' We're aware we haven't posted any updates so far.

No, there hasn't been a further IT issue, just not a lot has happened.

The goalkeeper’s reaction to this penalty. Oh, mate.

Watch: Diego Costa shouts ‘I sh*t on your whore mother’ at ref; gets sent off