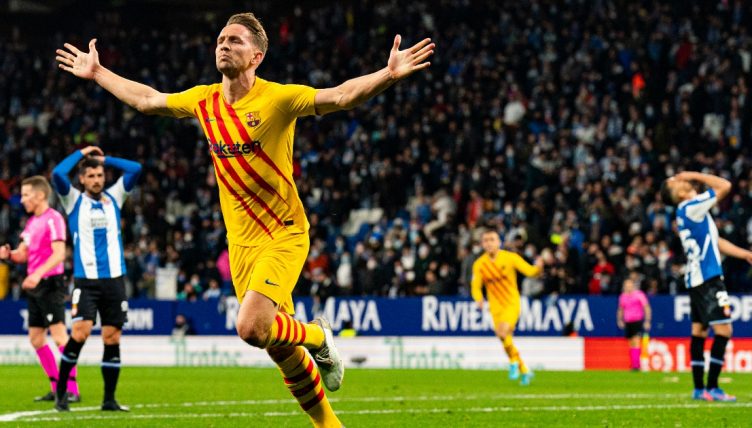 Chelsea stole the headlines this weekend after beating Palmeiras and becoming world champions for the first time in their history.

Elsewhere, Barcelona needed a 96th-minute equaliser to avoid defeat in the Catalan derby and there were plenty more great moments from across the Premier League, Football League and Europe.

Cesar Azpilicueta: “I expected the Palmeiras’ players to come around the penalty taker. I already told Kai he was going to shoot. I just tried to release the pressure from him.”

Great from our captain 👏 https://t.co/3zErRzMF7g

I LOVE RUDIGER SO MUCH 🤣💙🔥pic.twitter.com/pxXmPbnH2Y

We love players showing their personalities in interviews.

Fabinho's answer when he was asked about Burnley's chances against Liverpool is just priceless 😂 pic.twitter.com/wMQmKWF8I5

Mane returned from AFCON and was unsurprisingly full of confidence.

A ridiculously cheeky assist from the Arsenal loanee.

Pepe received one of three red cards shown after the final whistle, as carnage broke out between both sets of players and staff.

The Dragons extend their unbeaten run to 50 matches! 🔵👏 pic.twitter.com/i0F2Dmf1Dh

A free kick that Lionel Messi would be proud of.

You won't see too many hit or placed better than that one 🎯 pic.twitter.com/BBUpkxyzct

We hope Mainoo apologised to that Chelsea defender.

We’re now going to start watching Benfica B on a weekly basis.

The Ukrainian comes off the bench and produces a moment of magic to open the scoring for Atalanta.

Struck that so cleanly 💥 pic.twitter.com/PSXyxqv1RD

Bochum have lost 7-0 and won 4-2 against Bayern Munich this season. Bonkers.

That is some way to put your club 4-1 up against the #Bundesliga record champions.

Quaresma has just cemented his status as our favourite footballer.

Ricardo Quaresma has had enough of time being wasted pic.twitter.com/x64NzkU6SQ

Even at 39-years old, you're just not getting the ball off Wes Hoolahan 😍pic.twitter.com/4zZV7WErG7

We’re still not sure how Sakala managed to score from that angle.

Fashion Sakala caught everyone out with that strike! 😂

There’s never a bad way to score a late winner but this was pretty special.

The chest control before delivering this bicycle kick 😳