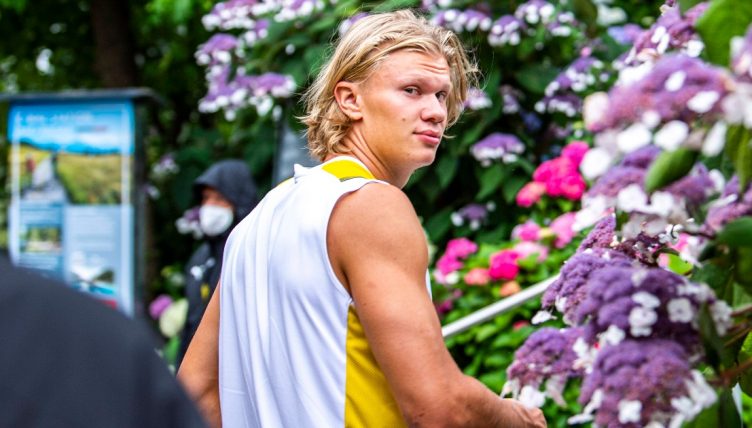 It’s been over a fortnight since the Copa America and Euro 2020 came to a close and it’s probably about now you’re starting to feel withdrawal symptoms from football.

But fear not: the sport never totally stops. There’s Olympic football, as well as MLS, while across Europe clubs and players are gearing up for the 2021-22 season with pre-season friendlies. It’s less than three weeks until the Premier League is back.

Here are some of our highlights from over the weekend.

If only the original shot had gone in.

That backheel from Lacazette in the build-up…

Yeah, this happened to us at 21 too. Nothing to see here.

Erling Haaland, at 21, stopping games to give a fan his autograph.
Damn, I hadn't even locked on one signature at that age!pic.twitter.com/bWR5jeDxwX

There were some unreal goals at #Tokyo2020 in the men's football competition.

None better than this from New Zealand's Liberato Cacace!#bbcfootball #bbcolympics

Manchester United lost 4-2 to QPR but at least it looks like they’ve got a player on their hands.

Bringing the dribbling skills while Messi’s away on his holidays.

Unfortunately, they went on to lose the shootout. Ah well.

Absolutely incredible goal by Glen McAuley to score his hat trick and equalise for Athlone Town, the game goes to penalties! 😱@AthloneTownAFC 4-4 @WaterfordFCie

This is why you don’t dawdle, kids.

What was he thinking? 😂 pic.twitter.com/m6MwC2h7Ka

Giorgio Chiellini: "We are going to name all keepers Gianluigi, so in 20 years when we need a new keeper we'll find him."

The G in Goalkeeper is for Gianluigi 🙌🇮🇹 pic.twitter.com/0mgQ9gzIi3

The way this goal by Gustavo Bou hits the crossbar not once, but twice 😱

The Japanese Messi is lighting up the Olympics.

Great move by Kubo before he scored the goal ..#JPN | #Tokyo2020
pic.twitter.com/fKNaDnV5o5

Everton’s pre-season hasn’t exactly been ideal. But at least Kenny is scoring panenkas.

This post match gesture from a goalkeeper in Uruguay is sure to brighten your day 🥰 pic.twitter.com/fAVyyd4CQ6

Pure silk in his boots.

Wilfried Zaha doing an immaculate Zinedine Zidane impression is exactly what we wanted to see on a Monday morning. pic.twitter.com/Q0UDgc8rU2