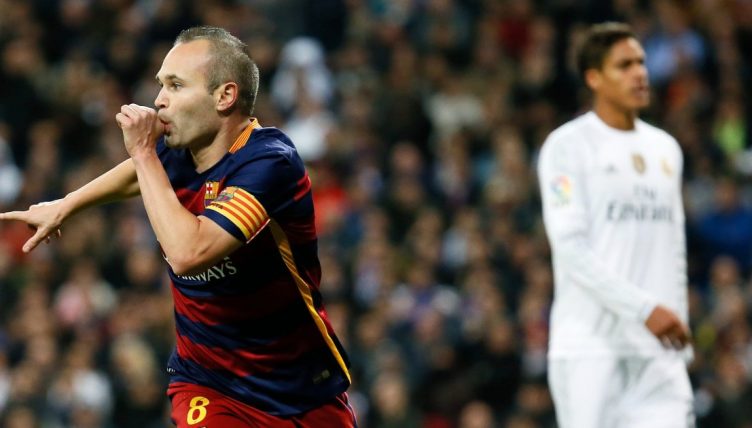 Andres Iniesta won everything there is to win during his career with Barcelona and Spain – including the respect of everyone involved in football.

The La Masia graduate made 674 appearances for Barca between 2002 and 2016, lifting an incredible 32 trophies, plus the World Cup and two European Championships with Spain.

Famously one of only three Barcelona players to be applauded by Real Madrid supporters, it is hard for anyone to have a bad word about such an incredible talent.

“Iniesta doesn’t dye his hair, he doesn’t wear earrings and he hasn’t got any tattoos. Maybe that makes him unattractive to the media, but he is the best.”

“He’s not especially quick, but he has that ability to always get away from you, which comes from his technique.”

“Iniesta is the boyfriend that every mother wants her daughter to have. The figures over his career tell you all you need to know. He is a magical player. There are few players in the world that can compare to him.”

“The press often ask me whether Messi or Ronaldo is the best, but for me something is very clear: Andres Iniesta is the number one. He is able to do even more difficult things on the pitch. He is magic with the ball and so influential.”

“Iniesta is easily Spain’s most complete player. He has everything. Playing alongside him is very easy.”

“He reminds me of myself.”

“Iniesta – he is the Zinedine Zidane of the team because he can do whatever you want him to with the ball.”

“Iniesta is a great player. If people compare me to him, that makes me proud. He is one of the best midfielders in the history of football. I like playing against him. I admire him as a player and an athlete.”

“When he has the ball, it’s like everything else stops – like the camera is going in slow motion.”

“He’s creative, he runs with the ball, he’s got a brilliant final pass and with each passing year he’s become more of a goalscorer as well as a provider.

“He’s a source of immense confidence for us. During matches you can see him taking on more and more responsibility and in attack he’s the team’s reference point.”

“When I see him play these days, he reminds me of Xavi. He was always a top-quality player. He started very young with us, and it’s crazy to see how he has gone on to make so much history.”

“He is the complete footballer. He can attack and defend, he creates and scores.”

“Iniesta’s the most inventive player in Spanish football at the moment. He’s like Harry Potter. One, two, three and whoosh… he’s past the player. It’s like he has a magic wand.”

“Andres Iniesta is the best player in the world. Andres is one of the best in understanding the game, and he powers the rest of the team.”

“Iniesta’s ability to create assists is one of the best in the world. You have to be very good at marking them both [Iniesta and Messi] and limit their threat.”

“There are some players who we don’t talk about how good they are. A lot of players are talked about, but the best in the world is Iniesta. He’s a player who can dribble, he can play, set up goals, run and much more, and he’s still not been given the Ballon d’Or.”

“Magic from Iniesta. He doesn’t pull rabbits out of his hat, he pulls out big, beautiful peacocks.”

“He is one of the best players in the world and I’m not just talking about my era. I’m talking about in the history of the game.”

“He is oblivious to the fact that he is up there with them. There is a humility about him. Most people I talk to always talk about Messi, but I drag them to Iniesta.”