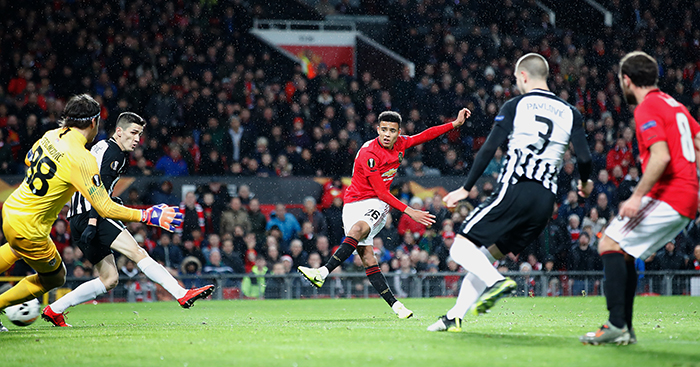 Manchester United are renowned for giving young players a chance – and their academy graduates have once again been of great importance to the team this season.

Incredibly, United have had a homegrown player in their matchday squad for every game since October 30, 1938.

And with Marcus Rashford, Scott McTominay and Jesse Lingard now established – and Mason Greenwood among the new generation breaking through – that amazing run is unlikely to end any time soon.

Even more impressive than that, though, it has emerged that of the 20 goals United have scored so far this season, only one was neither scored by nor set up by an academy graduate.

The exception was Daniel James’ goal against Crystal Palace, assisted by Anthony Martial, and this doesn’t even include the further 12 goals United scored in pre-season, all but one of which had a direct contribution from an academy player.

Rashford scored two of United’s four goals on the day, while the other two scored by Anthony Martial and James were set up by Andreas Pereira and Paul Pogba, who officially classes as an academy graduate having joined at the age of 16.

Martial got his second goal of the season with a brilliant strike in United’s draw at Wolves, and this time it was Rashford turning provider with a short pass beyond the home defence.

Daniel James scored his third goal in four games with a great strike from the edge of the box, and he was set up by acadamy man Scott McTominay with a simple ball.

A superb strike v Southampton completes a month to remember for @Daniel_James_97! 🌟 pic.twitter.com/tqUbxHIfLK

Rashford was the scorer of United’s sole goal against Leicester, converting from the penalty spot in the opening 10 minutes.

This game marked the arrival of 18-year-old Greenwood, who scored his first goal for the club with an excellent finish from a tight angle after some trickery on the right-hand side of the box.

Undoubtedly not the club’s finest moment of the season, but it was another positive for Greenwood as he made it two goals in two games, this time converting with his left foot after being set up by Jesse Lingard.

McTominay surprised everyone, including himself, when he struck one into the top left corner from outside the box to put his side ahead against Arsenal having set up by fellow graduate Rashford. A real case of “didn’t know he had that in his locker”.

United fans went into the game fearing the worst, but Rashford sent Old Trafford wild when he tapped in a cross from James to give them the lead.

In yet another game where Man Utd only scored one, 19-year-old Brandon Williams won the penalty scored by Martial with an excellent surging run into the box.

In a chaotic game which saw Tim Krul save penalties from Martial and Rashford, both would find the scoresheet nonetheless, with the latter and McTominay adding to the academy’s goal tally for the season. Rashford also got himself an assist.

It was the second double against Chelsea of the season for Rashford, who put his side 1-0 up with a penalty before scoring the winner with an absolute stunner of a free-kick. Like, really, really good. We’re talking Ronaldo vs Portsmouth good.

Greenwood continued to thrive in the Europa League with a goal and an assist against Partizan, while Rashford topped off the victory with his eighth of the season.