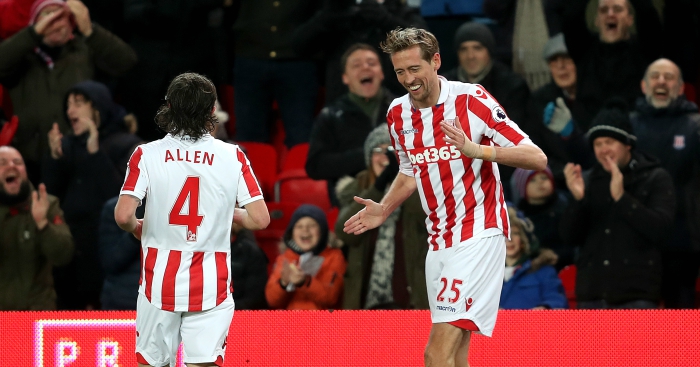 Peter Crouch has scored over 100 Premier League goals over the course of a career in which he has represented the likes of Liverpool, Tottenham and Stoke City.

But while he spends his days being a brilliant and immensely lovable footballer, he moonlights as a hilarious tweeter (and occasional radio DJ).

So much so that when Mats Hummels was recently asked whether Michy Batshuayi or Benjamin Mendy is the “king of Twitter”, the Bayern Munich defender instead opted for Crouch.

As a result, we’ve entertained ourselves by going back through some of Crouchy’s finest moments on Twitter. Just to reiterate, we really, really love him.

Crouch celebrated a goal in 2014 with an imitation of Cristiano Ronaldo, and took to Twitter to mock himself.

Robots vs the world

In homage to the infamous celebration, Crouch quoted a Guardian article which came with the dramatic strapline “robots could destabilise the world”.

Calm down I haven’t done it for ages https://t.co/qQhL8GCXdI

Another user asked Crouch how long it would be until he broke Alan Shearer’s Premier League goalscoring record.

I've worked it out and retirement age in england is 65 isn't it so I should come close https://t.co/NFLphXaR3H

Turns out he’s not actually that fussed whether you read it or not.

Here’s this weeks column get involved or don’t it’s up to you https://t.co/1T9wmpcaXK

This is the real FIFA scandal.

The giant striker posed for a picture with a jockey, and it was only going to end one way.

Perhaps I shouldn't stand next to jockeys 😕 pic.twitter.com/c3Ah9c9Pca

Yep, definitely one to stay away from.

I would have stepped in 🙈 pic.twitter.com/XVIu7iw9Tc

After Ronaldo’s effort against Juventus. But was Crouch’s better?

There is only a few of us who can do that

After his team-mate netted a 20-yard overhead at the Euros.

I'm glad shaqiri has been watching me in training 😉

Potentially the best of the bunch.

He’s still hoping, but at least he has a back-up plan.

I shall be attending ! Unless I get a call up 😒 https://t.co/ZRnPLFDwrP

And in response to not making the 2016 squad.

A very tall man on top of a podium…

King of the go kart podium . 🏁 Only wish I didn't have to take the ceiling tile off to enjoy it 🙈 pic.twitter.com/O6fjptu0EJ

Crocuhy knows how to get them #numbers.

Just imagine Crouch and Salah up top for Liverpool.

In response to the news the game was returning.

I'm available to promote if they need me again https://t.co/OGOIyK07xK pic.twitter.com/iv5Jg5SSEj

Not done with Ronaldo, Crouch quoted a tweet which compared his Champions League record to that of Lionel Messi’s.

When he moved to Stoke, Crouch was reportedly “in a helicopter on the way to the ground”. He later revealed he was in McDonald’s eating chicken nuggets.