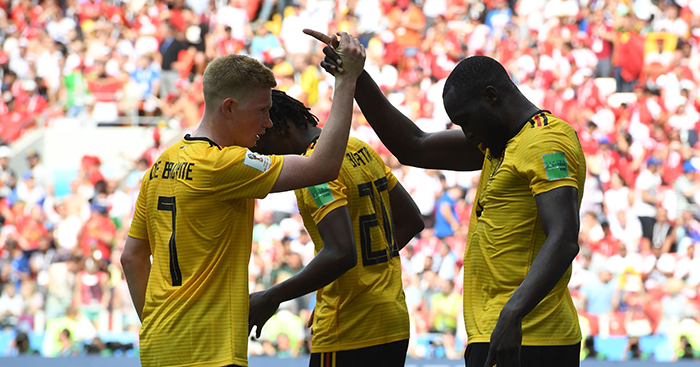 Manchester United, Manchester City, Chelsea, West Ham and Tottenham players all caught the eye on day 10 of the World Cup.

On one of the best days of the tournament so far, Mexico made it back-to-back wins to make it through to the last 16 before Belgium showed off their credentials with a thrilling display against Tunisia.

Then, a goal and a man down, Germany did what they do best, scoring a dramatic stoppage-time goal to beat Sweden and keep their hopes alive. It wasn’t a bad goal either…

A thing of beauty.

We couldn’t believe it either, mate.

Yep, that’s about the long and short of it, Gary.

The first player to score two goals in consecutive World Cup games since Maradona in 1986. The Manchester United striker has now scored 17 goals in his last 11 appearances for Belgium. He’s a leader.

What an image of Lukaku’s #WorldCup prematch team talk. Romelu isn’t the nominated, but rather the self-appointed #BEL captain, able to inspire fellow leaders including even Vincent Kompany, last season’s Premier League winning general. Rom is made of the right stuff for #MUFC pic.twitter.com/zKiz9a5fiN

He’s even an Honest John.

In his last 21 appearances for Belgium, Hazard has now scored 10 goals and set up a further 12.

This Belgium team is a bit good, isn’t it?

That’s 50 international goals now, a record for Mexico. He’s also only their third player in history to score in three separate World Cups and needs only one more goal to become their outright top goalscorer in the competition, too.

As consolation goals go, this was decent.

He even made Roy Keane smile.

Something to get Manchester United fans excited…

This is really good from Nike and Harry Kane. No doubt he’ll go and miss a penalty against Panama now.

You’ve already seen it by now, but this is ace, innit?

Wow! This is incredible 👏🏴󠁧󠁢󠁥󠁮󠁧󠁿

We really hope they keep this up.

Okay, this is technically from Friday, but Brian Kerr’s monalogue about the shape of Xherdan Shaqiri is straight from the Alan Partridge textbook of broadcast, and it’s absolutely wonderful.

Everyone deserves to hear Brian Kerr‘s description of Xherdan Shaqiri because Brian Kerr is a national treasure #WorldCup pic.twitter.com/GsbPpbdWB0

And another excellent clip from Switzerland’s win: a fan threw a huge cheese wheel in celebration of Shaqiri’s winner.

It’s now 29 games without a goalless draw. Maybe we’re getting carried away, maybe we’ll feel differently if England f*ck it up, but has this been one of the best World Cups ever? And it’s definitely coming home.

READ: A definitive ranking of every World Cup since 1990 from worst to best

This isn’t from the World Cup, but we think you’ll forgive us.

After a tough year and intense chemotherapy throughout I would like to let everyone know I am in complete REMISSION . I still have hurdles to get over to be cured but I can hopefully now move forward with some normality. I would like to thank my family/friends to start with who have gone above and beyond for me ❤️ The support I have received from Wolves/Nigeria, the football world and from people from all over the world has been hard to put into words. I can’t thank everyone at the Christie and heartlands hospital enough for there care!!!What next who knows… I’m just taking it a day at a time #Grateful 🙏🏽 #Remission

Sorry i haven’t been around much, It has been the toughest few weeks of my life.. Within the space of one month I have found out the news that I have a rare brain tumor and had surgery to have it removed, I am now in recovery and so thankful, Life is too precious. ❤️🙏 http://www.marca.com/futbol/2018/06/23/5b2d70d8468aeb5b1b8b4640.html