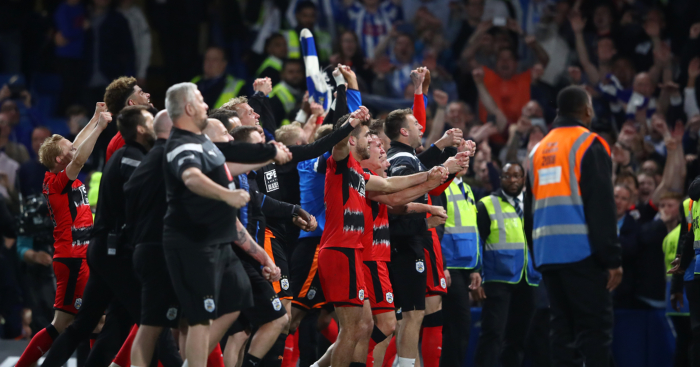 There were big moments involving Liverpool and Manchester United stars this week, while Chelsea, Leeds and, of course, Lionel Messi all make our pick of the action.

Huddersfield managed a 1-1 draw at Stamford Bridge to extend their stay in the Premier League by another year, with some brilliant scenes of celebration.

Meanwhile, football continued around the continent with a number of referees getting a bit too involved, as well as probably the best own goal you’ll ever see.

This referee got a bit too close to the action in Turkey, committing two fouls in quick succession.

This Birmingham fan set up a GoFundMe to pay for his tattoo of their manager after he tweeted saying he’d get one if they beat Fulham. So he got involved.

The Sparta Rotterdam man went in for a tackle against FC Dordecht in the 89th minute of a relegation play-off, with his side 1-0 up. This happened. It’s up there with the best.

Come on now Mark, behave. There’s a reason you weren’t included in this.

The Liverpool forward won yet another trophy at the Football Writer’s Award. We’re big fans of “I made them wrong”.

At @theofficialfwa awards for Mo Salah’s presentation. Salah: “They said I couldn’t play at Chelsea. Everyone said I wasn’t good enough. I made them wrong.”

This is just a great reaction to a typically stupid question on a transfer rumour.

You’re fooling no-one, Martin. We all know you’ll be back.

BREAKING: Martin Allen leaves Barnet for the fifth time, following their relegation to the National League.

We have installed Martin Allen as favourite to be the next manager of Barnet. pic.twitter.com/QKPCNRStda

"When we were in South Africa, I remember one night I was bored, so me and Wayne Rooney sat in his room and watched his whole wedding on DVD,"

This is just brilliant.

Spent a long time laughing at this pic.twitter.com/1PJZ0KiT74

Fair play Huddersfield that’s how you stay up!!! pic.twitter.com/QISbftGVbF

This is a fucking insane stat. pic.twitter.com/7lOnaEfRtK

It goes from bad to worse…

They've just been beaten 2-1 & the locals are belting out "you're f*cking sh*t" pic.twitter.com/NisMoRSrff

The midfielder hangs up his boots this weekend after an 18-year playing career – all of which has been spent at Real Sociedad.

As a tribute, they have replaced the badge on their shirts with Prieto himself. Incredible.

Fitting tribute? Sociedad to wear Xabi Prieto's face as their crest for the upcoming game against Leganés, his last before retiring after 14 years. pic.twitter.com/BhTW4LuIId

OK, so relegation hits everyone in different ways. But at least check the rulebook of your new division before releasing a kit which is, in fact, banned in your new league.

Has anyone checked national league rule 7.3 which states that black kits are not allowed https://t.co/yjtqk5KUqN

If this is the kind of thing that happens regularly in Romanian football, then we are all for it.

Maybe one week he won’t make it in here. Probably not though.

Absolutely mental what Lionel Messi is doing this season with a heat map like this.

He’s outperforming EVERY forward in the world with a midfielders heatmap. It’s daft. pic.twitter.com/HyhLd6iH3Z

29 – Adebayo Akinfenwa (born 1982) is the only player born before 1988 to score/assist 25+ goals in England's top four tiers this season. Birthday. pic.twitter.com/3ml5hOG1ZG

11 of the hardest b*stards to play in the Premier League: Keane, Batty, Jones…