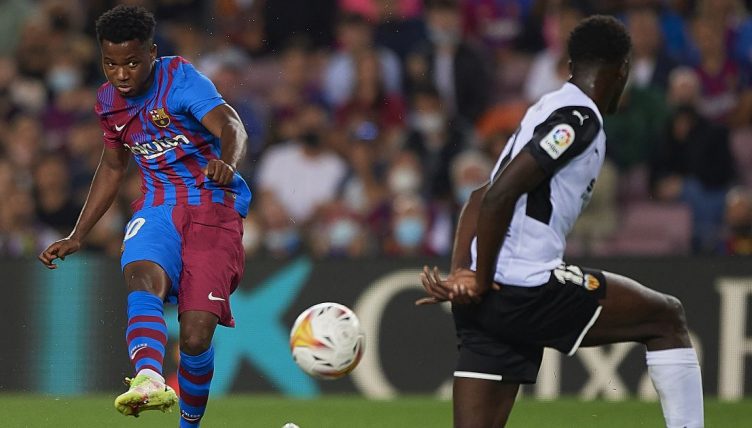 Another act of dancing genius from Liverpool‘s Mohamed Salah stole the footballing headlines in England this weekend, but that was far from the only footballing moment of note.

Barcelona‘s Ansu Fati was proving once again just what a talent he is and there was a goal from a 15-year-old in the Portuguese Cup, as well as some spectacular strikes in leagues around the world.

Great to see the mutual respect between two iconic managers.

A warm embrace between Jürgen Klopp and Claudio Ranieri… 😄

They tip their caps to one another 😂 pic.twitter.com/A9a9GmReaj

A brilliant achievement from the Liverpool forward.

Sadio Mané has now scored 100 Premier League goals and not a single one of them has been from the penalty spot.

One for the purists. 🧘 pic.twitter.com/GIotBYsDCA

Konate summed up every football fan after that Salah goal.

Ndombele may be frustratingly inconsistent, but he can be so fun to watch.

Chelsea had Mendy to thank for their three points at the weekend.

An unorthodox yet brilliant piece of defending.

A beautiful curling finish and a strong response from Barca to going behind 🔥 pic.twitter.com/MVaxIRySwT

The Arsenal loanee is ensuring that Mikel Arteta doesn’t forget about him.

Who needs Salah when you’ve got Joe Hart pic.twitter.com/RXoIqdd3YH

Lee Bowyer v Kieran Dyer has nothing on this.

Cathair Friel levels it up and in a moment of madness, Aaron McCarey gets sent off for clashing with team-mate Bobby Burns!

Moreno showed Villarreal what they’ve been missing in recent weeks.

Gerard Moreno is BACK! 🔥

A stunning volley to mark his return from injury 💥 pic.twitter.com/oUCeR3Mf9c

Wonderful shithousery from the Lazio defender.

Joaquin Correa left Lazio to join Inter Milan on loan in the summer.

Inter lost 3-1 to Lazio on Saturday and this is how his former teammate Luiz Felipe celebrated.

It got him sent off 🔴 pic.twitter.com/yxYi8q2vzF

We’d be amazed if Sulemana isn’t linked with a Premier League club in the near future.

Kamaldeen Sulemana. What a player he is🔥🔥 pic.twitter.com/e9sUZhggNP

Roberto Firmino would be proud of this no-look pass.

As far as no-look passes go, that's up there. 🤤

It’s easy to see why Gignac is treated like a footballing god in Mexico.

The curl on this strike is unbelievable.

The England ‘keeper was caught cheating on the test.

Jordan Pickford had his homework done in case he had to face a penalty vs West Ham… pic.twitter.com/btuFYcoJX5

We’ve seen it all now.