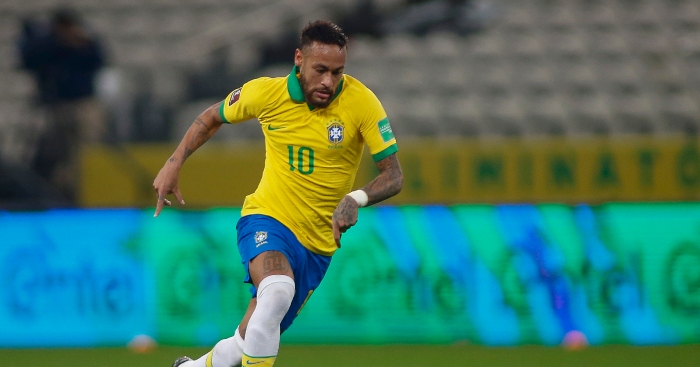 Erling Haaland continued his incredible goal-scoring form for Norway and Neymar displayed his repertoire of tricks in Brazil’s 5-0 win over Bolivia.

Neymar is insane! How did he manage to get out of that and kept play going? 🤯 pic.twitter.com/LmQBbqg2fu

Even an injury can’t stop De Bruyne from making an incredible pass.

71’: Kevin De Bruyne asks to be subbed off

Forever proving himself to be a good bloke.

This is a text Andy Robertson sent to Jordan Henderson after #lfc won the Champions League in Madrid last year! ❤️ pic.twitter.com/uokKkvrtHB

Kante can do a lot of things. Understanding the Scottish accent is not one of them.

A lot can change in seven years.

How it started How it’s going pic.twitter.com/DIxltWOgBR

Not something we expected to see this weekend.

Jorginho got his guitar out and had the whole Italy squad singing Oasis – Wonderwall 💙pic.twitter.com/WCzE1VNspb

They make this look far too easy.

After conceding six in his last outing, De Gea kept a welcome clean sheet for Spain thanks to this excellent save.

With a decisive save in the first half, David de Gea produced a clean sheet in Spain’s 1-0 victory over Switzerland from r/reddevils

Meunier was able to see the funny side after conceding a penalty.

Erling Haaland has scored his first ever hat trick for Norway.

He has 51 goals in his last 48 games across all competitions for club and country 🔥 pic.twitter.com/I4rrIQm6Yv

What else are you meant to do?

When the pubs close at 10 but there’s a penalty shoot out…. 🏴󠁧󠁢󠁳󠁣󠁴󠁿😂 pic.twitter.com/OoZbduuZey

The most incredible feeling. 🦋🏴󠁧󠁢󠁥󠁮󠁧󠁿

Ok, maybe not his number one fan.

Not bad for a defender.

Watch: Rashford leaves Alexander-Arnold on the floor with brilliant skill