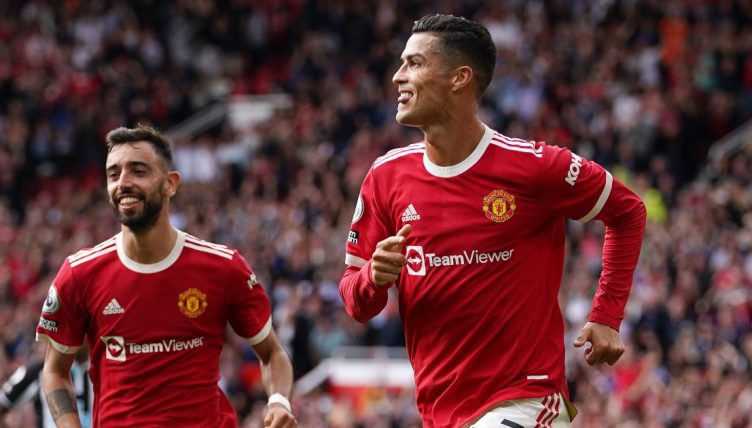 Cristiano Ronaldo stole the show this weekend by marking his second Manchester United debut with two goals in their 4-1 win over Newcastle.

Elsewhere, Jose Mourinho celebrated his 1000th game as a manager in style as Stephan El Shaarawy’s last-gasp winner for Roma.

We’ve got a feeling that you’re going to be seeing this celebration quite a lot this season.

Lingard achieved a boyhood dream by playing alongside Ronaldo.

Ronaldo isn’t the only Portuguese star at Old Trafford.

Not bad for a one-season wonder…

The England cricket team would be proud of that catch.

Lukaku announces he will no longer be sliding on his knees after yesterday’s attempt went wrong.#lukaku #2baba #annie #burboy #twaang #bbnaija pic.twitter.com/EVZPxmJFvU

We’re getting flashbacks to that game at Old Trafford in 2004.

Lovely curling effort to win the game for Roma! 💫

It doesn’t get much more dramatic than this.

Thomas Lemar wins it for Atletico Madrid in the 99th minute!! 🔴⚪

Unbelievable drama as the champions complete the comeback against Espanyol 😱 pic.twitter.com/cgEFFGESIO

A brilliant strike to complete a brilliant team move.

What a fucking goal omg pic.twitter.com/KNcjs13c1G

Augello hit this so sweetly.

We're being spoilt for goals in this game 🙌 pic.twitter.com/M1GI6Capxm

It’s great to see Bamba back on the pitch.

Everybody that knows me know it's not my type to talk after a defeat. But on a personal note, it's my first 90mns for months and after an hard fought battle against cancer. I'll take this victory for today and will look for one on the pitch next time 🙏🏾. Thank you all ❤️ pic.twitter.com/U9UO03pYkK

The League of Ireland can always be relied on for a spectacular goal or two.

Liam Burt pulls one back with an incredible effort from near the halfway line just seconds after the restart, what a goal! 🎯

Great chest control and then the finish on the half-volley 🥵

Pure 🔥🔥from the captain! pic.twitter.com/ULip8I51er

It teed up perfectly for him. An absurd finish by Connor Rutz 🚲🤯

Doria is very much from the David Luiz and Alex school of Brazilian centre-halves.

The young Argentine has been in red-hot form for Atlanta United since returning from the Olympics.

Pogba certainly had an eventful Saturday.

Paul Pogba turning up at Parklife after the game 😂😂 pic.twitter.com/0tNJBaA4op