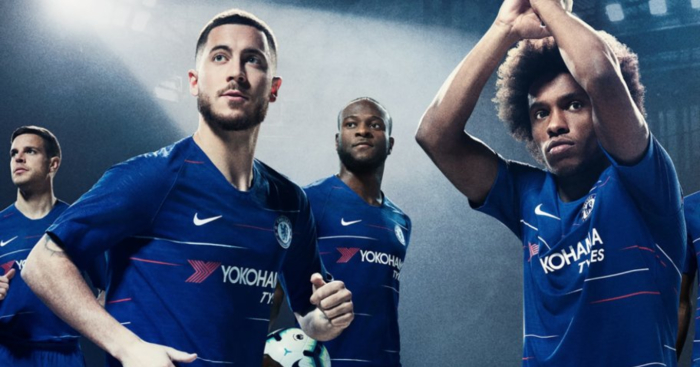 As the 2018-19 season draws ever closer, clubs from the Premier League and around Europe are preparing by releasing their new kits.

It has become custom nowadays to begin every season with a new kit, be it with multiple changes or just the minor details, but there’s something about a new kit being revealed that just whets the apetite for the fun to begin again.

We’ve taken a look at some of the clubs who have already revealed how they will look when they take to the field in August.

This is about as different as you could possibly expect from a shirt that has to remain predominantly red with white.

The red itself almost appears faded, the collar is like something we’ve never seen before, and they’ve added a strange pink ring onto the sleeve – where the ‘Visit Rwanda’ sponsor will sit.

Arsenal’s new kit reminds me of that episode of Friends when Ross wears the same outfit as his date pic.twitter.com/SM40ZRzakL

This is really nice, except it’s not yellow.

Overall a smart shirt from Burnley, which is sadly ruined when you add a sponsor logo.

The shirt harks back to the club’s famous V-shirt from the 70s, as the clarets prepare to take on Europe once again this season.

Once you see Batman though, you can’t unsee it.

The more I see the detailing in the Burnley shirt, the more it reminds me of this! pic.twitter.com/QwdkKmEgmB

Alternating blue hoops adorn this season’s Cardiff City home strip for their first season back in the Premier League.

BREAKING: Here is the Cardiff City kit for the 2018/19 season. pic.twitter.com/oBGGFreyjA

Taking its inspiration from the 80s and 90s, Chelsea’s new design sees their traditional blue feature flashes of colour across the front.

There are two unique points to note, as inside the shirt reads the line ‘blue is the colour’, the first line in the club’s anthem, and on the back of the collar is a small lion, as is on the badge.

The stage is lit.

Palace are entering into a new deal with Puma, which has seen them adopt a fat stripe with a fade from the bottom, while their away kit is white with a typically popular red and blue sash.

What do you think of Crystal Palace's new Puma kit for 2018-19? pic.twitter.com/DlAlBSGiZr

Everton’s new design is relatively straightforward, though the faux-collar is a bit unusual.

OFFICIAL: Everton have unveiled their new home kit for the upcoming 2018/19 season, they will debut it against Southampton this weekend.

The Craven Cottage side have gone retro for their return to the Premier League, with the kit being a throwback to the popular design worn between 1997 and 1999. If you fancy them to enjoy similar success, check out these bonus codes.

A black stripe dominates the middle of their new home kit, signalling a break from the plain white designs of recent seasons.

From the popular home kit, to the less popular away kit.

It’s an all-blue number for Fulham on the road, and it’s split opinion between the fans.

Featuring a round collar with white trimming, many fans have likened it to a kit of neighbours Chelsea.

Ready to reignite in the @premierleague! 😎

First of all, props to Huddersfield for unveiling the kit on a new (kind of) signing. A great way to kill two birds with one stone.

We’re not convinced by the collar on the shirt, but that seems to be a theme with this season’s kits.

🖊️ HE'S BACK! #htafc has completed the permanent signing of defender @KongoloTerence from @AS_Monaco on a four-year contract for an undisclosed fee!

👕 Terence is sporting the new @UmbroUK home kit for the 2018/19 @premierleague season.

Now this is a collar we can get behind. In fact, the whole kit is great.

There’s not a massive amount you can do with a shirt that needs to remain almost entirely blue, yet somehow this is a real fresh look. We like.

‘This Means More’ is Liverpool’s tagline that came with the release of their *slightly* new home kit.

It features the same colour after their 2017-18 kit proved to be one of the most popular ever, sticking with a retro feel with the main alteration being the addition of a collar.

Jurgen Klopp’s men will wear the new strip for their final Premier League match of the season but will walk out in Kiev in this season’s strip for their Champions League final with Real Madrid.

Our new 2018/19 Home Kit is now available in store. 🙌 pic.twitter.com/aGMcxbHPGF

You might have missed the debut of Liverpool’s new away kit in the midst of Loris Karius dropping a clanger and getting verbal abuse from a Tranmere Rovers player.

Missing it, though, might not have been a bad thing. Since when has anyone ever sat down and thought that Ribena purple with sunset orange would be a good combination?

Liverpool have reached aubergine in their desire to tick every box on the Dulux colour chart. #LFC

An example of a club having had two new away kits each season for years, so now look for something they’d yet to do, and that means finding themselves wearing a Ribena-esque kit. pic.twitter.com/3DTAJdrsho

Much disappointment was met with the release of City’s kit for the 2018-19 campaign and in truth it is a bit of a let-down.

The collar in particular has come under scrutiny, and rightly so. A poor effort.

Man City’s last three shirts, all much of a muchness. If clubs and kit manufacturers weren’t so keen on changing kits every five minutes they wouldn’t run out of ideas and inspiration. #ManCity pic.twitter.com/bhNwIz7XGe

Supposedly navy blue – though some of the lighting does make it look more grey – the shirt is detailed and sharp, and also has an important message behind it.

It has been made from recycled ocean plastic, as the club works with Parley for the Oceans to help raise awareness for the issue.

The Toon Army are fond of the 1990s, Kevin Keegan and the likes. That fondness has inspired this season’s away strip, which is based on the famous 1995-96 number.

All it’s missing is the Newcastle Brown logo and button up collar, and it would almost be a perfect replication. Well played, Puma.

Find out more about our new away kit: 👉🏽 https://t.co/fW8MWhdZkz#TheFabricOfNewcastle pic.twitter.com/OhIfFOpqHC

Introducing our Home & Away kits for the 2018/19 season… #ImForever pic.twitter.com/o4wrfg1ZaT

Wolves are keeping it simple on their return to the Premier League this season, with two plain strips.

The home appears to be more towards the vibrant end of the gold spectrum, whilst the away kit has a feel of Real Madrid about it with the all-white choice.

Fans of lots of other teams who wear red and white stripes would go mad about this, but for Atleti it’s a beaut.

We can even just about get on board with the collar. It seems actual collars are out.

While everyone was busy speculating why Cristiano Ronaldo was the only player not to pose in the new Real Madrid kit, we were busy thinking how bloody good Toni Kroos in it.

Both the home and away kit are very Real Madrid. And very good.

There’s an elegance about this Valencia kit. Plain white shirt and shorts, finished off by the black socks.Traditional.

The club is celebrating its centenary, and it’s a beauty of a kit to celebrate in.

A kit of the past, present and future all Swansea aren't we Centenary kit bet its not at 1919 prices though https://t.co/Ofdn1XopjE

There’s only so much you can do with red and black stripes, but AC Milan have nailed it by proving there’s no need to go overboard.

Both home and away strips are simple and classy, with white shorts and socks accompanying the home shirt.

Inter, meanwhile, haven’t diverted from what works with another simple yet elegant design in their famous black and blue.

Wearing a wider stripe, meanwhile, will be Juventus, whose Adidas kit is mildly spoiled by the stuck-on sponsor’s logo across the front.

Juventus drop their home kit for the 2018/19 season (📸 @adidasfootball) pic.twitter.com/yyCF1ZQbx2

You can always rely on Roma for a stellar kit, and Nike have pulled it off again, with their simple but perfect design.

There’s just something about this lot from Genoa. They know how to drop a beauty of a kit.

You look at Samp, and you instantly think of Mancini, Vialli and co. from 1992.

Nothing has changed since those days when it comes to kit, and they’ve released their latest attempt. You’ll be hard pushed to find a better complete set of kits anywhere.

What do you think? pic.twitter.com/w3x6ICW1Aq

Bayern’s new design is simple yet detailed, with the front of the shirt displaying a retro diamond pattern, and the shoulder stripes paying homage to the treble-winning side of 2012-13.

A fairly standard design, but typical of Dortmund’s image, the yellow and black shirt is simple but effective. The tag-line ‘The pulse of Dortmund’ says it all.

Nobody likes a proper collar these days, do they?

Did someone say England ’82?

Whatever this was inspired by, we love it.

Is anyone else getting Barcelona?…

“But Luke what’s your thoughts on the neckline…”

It’s a plain number at home for Rangers this time around, sticking with the traditional blue, white and red strip.

This couples up with a traditional Palace-esque white away kit, and an orange and blue third kit.

Rangers have unveiled their new kits for the 2018/19 season.