Every nation’s protests and political statements at World Cup 2022 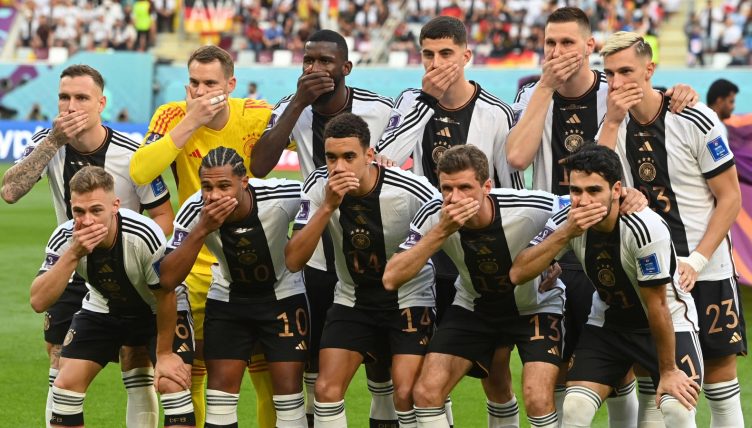 The 2022 World Cup has been dominated by protests as competing nations have spoken out against Qatar’s human rights record and treatment of LGBTQ+ people.

Qatar has been scrutinised on a number of issues since it was awarded hosting rights to the world’s biggest sporting competition in 2010.

And, despite Gianni Infantino telling everybody to focus on the football in a number of bizarre public appearances, there has been little sign of protests dying down since the start of the World Cup.

We’ve tracked all of the protests that have taken place at the 2022 World Cup, while including those that didn’t quite happen.

Australia made their feelings clear before travelling to Qatar for the finals, releasing a collective video, featuring 16 players, that criticised Qatar’s human rights record and treatment of LGBTQ+ people.

The Qatar Supreme Committee rebutted with: “No country is perfect, and every country – hosts of major events or not – has its challenges.”

A message from our @Socceroos on the @FIFAWorldCup #SupportingThePlayers pic.twitter.com/bUqW2pne1w

The right to drink beer inside stadiums pales in comparison with some of Qatar’s bigger issues, but the decision to ban the sale of alcohol 48 hours before the opening game was an unpopular one.

And, with their side easing to victory over the hosts, Ecuador fans spent the second half chanting “We want beer!” and reflected the mood of nations across the world.

Ecuador 🇪🇨 fans singing QUEREMOS CERVEZA needs to be named as the new original song for the World Cup pic.twitter.com/Y7LAnGIi6r

Nine European countries, including England, Germany and Wales, had planned to wear the armband, conceived as a symbol of diversity and tolerance, throughout the 2022 tournament.

But they all abandoned those plans after FIFA threatened sanctions – including yellow cards and bans – at the eleventh hour.

Ironically, the Dutch company that makes the bands has claimed it’s sold out after shipping 10,000 of them in the past two weeks.

Before their opening match against England, all 11 Iran players remained silent while their national anthem was played at the Khalifa International Stadium.

Their compatriots in the stands also booed, both groups voicing their unhappiness with Iran’s authoritarian government.

Back in Tehran, there have been riots following the death of 22-year-old Mahsa Amini in the custody of Iran’s morality police in September. She was reportedly detained for violating the country’s strict dress code.

According to recent estimates from the Human Rights Activists News Agency, at least 348 protestors had been killed and almost 16,000 arrested as security forces attempt to crack down on the rioters.

This is BRAVERY 👏 Iran’s soccer team just refused to sing their national anthem in light of the recent protests over the death of Mahsa Amini. pic.twitter.com/8ZPIWuYJ0k

Some sections of English society took offence with their side taking the knee during last summer’s European Championship but there was little dissent when they did the same during the 6-2 win over Iran.

The gesture is to support anti-racism movements worldwide, including ‘Black Lives Matter’.

US journalist Wahl said he was detained for 25 minutes for wearing a rainbow T-shirt to the USA’s draw with Wales and was forced to remove it by officials.

Bucket hats have become an indispensable part of Welsh football culture, but some Qatari officials took offence to some Welsh supporters wearing them at their side’s opening match against the United States.

Welsh fans, including the former Wales international Laura McAllister, said they were not allowed to enter the stadium Ahmad Bin Ali Stadium in Doha while wearing the hats, which were made in partnership with the FAW in support of the LGBTQ+ community.

“On Monday Cymru returned to the World Cup for the first time in 64 years, a historic moment for the squad, the valued fans – The Red Wall / Y Wal Goch – and the nation,” read a statement from the FAW.

“However, the Football Association of Wales (FAW) were extremely disappointed by reports that members of Y Wal Goch, which included FAW staff members, were asked to remove and discard their Rainbow Wall bucket hats before entry to the Ahmad Bin Ali Stadium.”

Some Welsh fans were refused entry into the stadium tonight until they gave up their rainbow coloured bucket hat. 🏳️‍🌈 pic.twitter.com/vgxQMyhFmb

Belgium were banned by FIFA from wearing their away kit due to the word ‘love’ appearing inside the collar, a team spokesman said before their opening match.

The white shirt features a rainbow-coloured trim and has ‘love’ written inside where the label would usually appear. It was inspired by the Belgian music festival Tomorrowland, which promotes diversity, equality and inclusivity.

Belgium spokesman Stefan Van Loock said FIFA banned the shirt because of commercial links to the festival – not the rainbow colours classically linked to the LGBTQ community.

FIFA have demanded that the Belgium team remove the word "love" from the collar of their away shirt, sources have told ESPN.

Barred from wearing the “OneLove” armband, Germany found another way to express their distate with FIFA and Qatar by covering their mouths during the on-pitch team photo before Wednesday’s game against Japan.

A statement from the German Football Association later read: “It wasn’t about making a political statement – human rights are non-negotiable. That should be taken for granted, but it still isn’t the case. That’s why this message is so important to us.

“Denying us the armband is the same as denying us a voice. We stand by our position.”

Germany before kicking off at the World Cup: 🤐 pic.twitter.com/Kbms7yg81c

Faeser, Germany’s interior minister, wore the armband with pride during her side’s match with Japan on Tuesday.

Belgium’s foreign minister, Hadja Lahbib, also wore it during her nation’s 1-0 win over Canada and was seen in an animated discussion with Gianni Infantino.

READ MORE: A ridiculous XI of players brutally snubbed for the 2022 World Cup