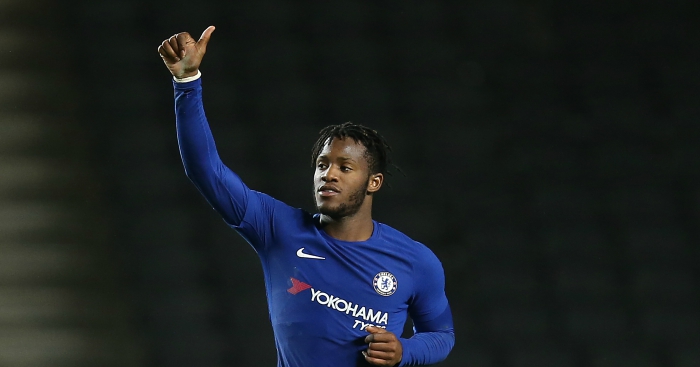 Chelsea, Everton and Newcastle United are among the Premier League clubs to have given senior players outings in the Checkatrade Trophy this season.

The controversial tournament was previously competed for by League One and Two clubs only, allowing smaller teams the chance to lift silverware at Wembley.

Over the past two seasons, however, clubs in the Premier League and Championship have been allowed to enter academy sides.

The idea was that it would give academy players the chance to experience senior football, but a number of more established names have also appeared in the competition.

Charly Musonda: Despite three goals in two appearances in the competition, the writing was on the wall for Musonda when he complained about a lack of game-time on Instagram.

At least he won’t have to play in the Checkatrade Trophy on loan at Celtic for the next 18 months.

Kenedy: Poor MK Dons had to face a Chelsea Academy side which featured all three of Batshuayi, Musonda and Kenedy. They lost 4-0.

Luke Garbutt: Garbutt was a highly-rated prospect when Everton signed the left-back from Leeds United in 2009. He’s now 24, and hasn’t made a senior appearance since December 2016, while he was on loan at Wigan.

The former England youth international was recently registered for the Toffees’ Premier League squad, however.

Luke Garbutt has been included in Everton's updated squad!
Will he solve our left back problems? pic.twitter.com/OOuqq6p1Md

Rolando Aarons: Scored Newcastle’s only goal in a 4-1 defeat at Oldham. It completely passed us by that he rejected a loan move to Hull City in January to instead move to Hellas Verona. Mint.

Daniel Amartey: Reinventing himself as a right-back following an injury to Danny Simpson. Was the turning point his 90 minutes in a 2-1 win over Scunthorpe? Probably not.

Leonardo Ulloa: Remember when Ulloa was scoring crucial goals in the run-in to Leicester’s title win? It’s probably fair that the striker has been allowed to return to Brighton on loan.

Kelechi Iheanacho: Playing a £25million striker in a competition designed to give young players a taste of first-team football is probably unfair.

Aleksandar Dragovic: When Dragovic joined Leicester on loan from Bayer Leverkusen he probably wasn’t expecting to be playing against Scunthorpe as part as an academy side.

Yohan Benalouane: We couldn’t tell you anything about Benalouane other than he dresses like he’s got far too into Assassin’s Creed.

Total look from my brother @iliaspaylis @issi.athens follow him guys .ISSI the official site with all handmade créations is coming #ninjawarrior

James Collins: The 34-year-old Wales international played the first 24 minutes of a 2-0 defeat to Wycombe before having to be substituted. A worthwhile experience for all involved, no doubt…

Charlie Adam: Started all three of Stoke’s appearances in the competition as they finished bottom of Group C.

Saido Berahino: You may or may not be surprised to learn that Berahino failed to score in his one appearance in the Checkatrade Trophy this season.

Ibrahim Affelay: Scored Stoke’s only goal in a 3-1 defeat at Bury.

Jack Rodwell: Rodwell has made five starts this season. Three have been in the Checkatrade Trophy.

Brendan Galloway: Sunderland offered Everton the chance to recall Galloway in January given he is struggling for game-time at the Stadium of Light. Everton rejected the opportunity.

Callum McManaman: Sunderland really do have a lot of players you used to think maybe could be alright in the Premier League.

Oliver Burke: From the Bundesliga to Shrewbury in a few months must be pretty tough.

Alex McCarthy: Conceded five goals in three games in the Checkatrade Trophy but has recently replaced Fraser Forster as England’s No.1.

Ryan Shotton: Shotton is 29 years old now and we’re all really getting old.

Where are they now: The Man Utd team which won the first U21 Premier League