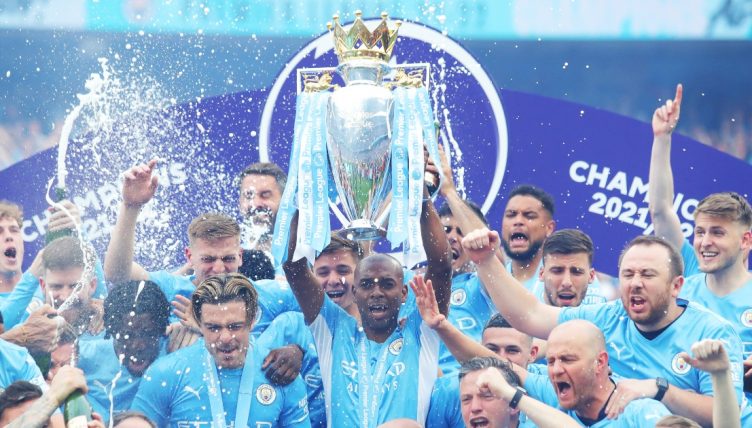 After a long and thrilling season, Manchester City pipped Liverpool to the Premier League title with a dramatic 3-2 win over Aston Villa.

A fitting tribute to their Premier League title win in 2011-12.

We’re so so happy for Zinchenko.

🗣 “I’m so proud to be Ukrainian. I would love to one day bring this title to Ukraine for all Ukrainian people because they deserve it.”

And Patrice Evra said that City didn’t have any characters in the dressing room.

Man City's kitman is at it again… 😂

We bet Keane left the Etihad as soon as the cameras were turned off.

Micah is having the time of his life, meanwhile Roy… pic.twitter.com/8EGHaSCGkW

Champions League qualification and the Golden Boot. It was a great weekend for Son.

You love to see it 🥹 pic.twitter.com/nM6Lk8jPAU

Liverpool fans will hope that Origi has one last dramatic moment up his sleeve.

Hang this photo in the Louvre.

This photo of Raphinha celebrating with the Leeds fans 💛 pic.twitter.com/5dArZeAXwQ

Ibrahimovic may be 40 years old but he’s still going to put on a show.

Another league title for Zlatan Ibrahimovic to add to the collection 😎 pic.twitter.com/j5mmaiheA3

Paolo Maldini watching his son, Daniel walk out for the trophy lift. 🥺

A third generation of Maldini's at Milan. A legacy. ✨ pic.twitter.com/Kt4UAD36LE

The Hearts goalkeeper was rooted to the spot.

A rocket that could win the Scottish Cup for Rangers if Hearts don't come up with a response now 🚀 pic.twitter.com/D8IUOCxIXX

Trent Alexander-Arnold would be proud of this strike.

He’s still as cool as ever.

A goal in front of the Stretford End on your Old Trafford return?

AMANDINE HENRY. WHAT A STRIKE 😱

Not a bad strike for a defender.

After making a fool out of Real Madrid, Mbappe then embarrassed this goalkeeper.

An excellent piece of shithousery.

The Newport Pagnell midfielder couldn’t have struck it any better.

Kieran Barnes with a moment he'll never forget as he puts Newport Pagnell into the lead at Wembley with a stunning effort outside the area! 🤩 #FAVase #FAVaseFinal pic.twitter.com/D41apk8T1C

After 22 years in English football @daRealAkinfenwa
is ready to 'take on the world!' 🌎pic.twitter.com/Tg5RNRLcFW

Watch: ‘Is it true?’ – Pep Guardiola is stunned by Man Utd revelation