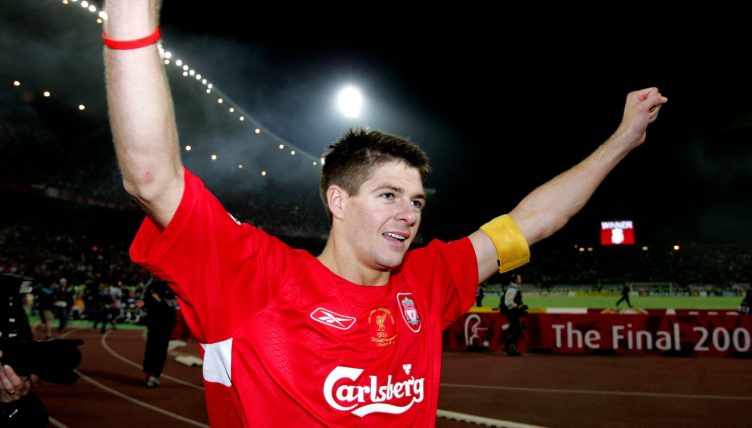 Few players come to represent a club quite like Steven Gerrard symbolises Liverpool.

Gerrard won nine trophies across a 17-year playing career for the Reds, scoring 186 goals in an amazing 710 appearances, but it was the intangibles that made him special: the ability to grab a team by the scruff of the neck and single-handedly drag them to glory – never more evident than that famous night in Istanbul.

“I have played alongside some of the greatest footballers of my generation, but there is only one ex-team-mate I would rate higher than Steven Gerrard. The biggest compliment I can give him is he is second only to Zinedine Zidane in terms of his world-class status.

“There are some who argue Gerrard cannot be rated so highly because he does not have the medal haul to compare with, say, the Manchester United players.

“It is preposterous to judge a player’s ability based on his trophy collection. There are dozens of players who have several Premier League winners’ medals who are not fit to lace Gerrard’s boots.”

“I’d have to say Stevie [was the best England team-mate]. For me he’s an incredible player, an incredible leader. He helped me a lot during my early days with England.”

“It was a disgrace he didn’t win European Footballer of the Year after Istanbul in 2005 and, for me, he will be regarded as one of the greatest midfielders of all time.”

“I’m spoilt having a team-mate like Gerrard as I can count on him supplying me with perfect passes. You make the run into the space and however tightly marked he is, he finds a way to get the ball through in perfect condition.

“The highest compliment I can pay him is that he’s as creative as a Xavi at Barcelona, with something extra as well. When you add his energy, toughness, leadership and goalscoring ability and the result is a fantastic all-round player. He is without doubt the greatest player I have ever played with, he has everything.”

“There are a small number of players in the world that are irreplaceable, and Steven is one of them. Not just irreplaceable as a player but also as a captain, and what he represents for Liverpool.”

“Best player I’ve played with without a doubt. I’m really privileged to have played with him because Stevie will go down as the greatest of all time. He’s an amazing person also and for me he was the perfect captain.”

“To me he is one of the super best midfielders in the world. He is an excellent player.”

“What I have always liked of Steven is that on the pitch he was very quiet, but was capable of inspiring all his team-mates with great strength, not so much with words. The real example – and that is what I’ve learned from players like Steven and Franco Baresi – is to do rather than talk.

“And he was indeed one who did a lot and since he also had great talent, he was easy to follow. His story is one of those stories to be told, one of those fairytales, to be narrated to your children and grandchildren.”

“There was a point when Gerrard was the best midfield player in the world. It is unusual to get complete midfield players who can do everything, but that is what he was.”

“If you were looking for the player you would replace Keane with, it would be Gerrard, without question. He has become the most influential player in England, bar none. More than Vieira. Not that Vieira lacks anything, but I think that Gerrard does more for his team than Vieira does, and has way more to his game.

“I’ve watched him quite a lot. To me, Gerrard is Keane. Everywhere the ball is, he seems to be there. He’s got that unbelievable engine, desire, determination. Anyone would love to have Gerrard in their team.”

“I was lucky to play with a few of the best players in the world, but for me the best was Stevie G. I had a great experience playing with him for three years at a great club like Liverpool.

“I think he’s an example for every player. As a person, he was one of the best I shared a dressing room with.”

“In my opinion, Stevie’s probably been the greatest Liverpool player to put on the red shirt. One of the things that springs to my mind is a time when we were chasing a Champions League spot — Stevie was about 18 at the time — and we were playing Arsenal at home.

“They were flying at the time, they had the likes of Vieira, Petit, Bergkamp, Henry, Adams was still playing at that time. It was one of Stevie’s earliest games, and he looked very nervous to me; he was sweating, and he looked like he was over-excited, he couldn’t wait to get out there. I asked him, ‘Are you OK, Steve?’ and he said ‘Yeah I’m OK. I’m going to smash these today. I’m going to smash these today,’ and he meant it.

“For a young lad who’s probably not even shaving at the time to say that he was going out to destroy Vieira and destroy Petit… When he went out there, it was probably one of the best performances I’ve ever seen from an 18-year-old kid in my life.

“His passing was immense, his tackling was incredible. He controlled the game totally, he set up a couple of goals. That just proved to me he was going to go on to be world-class.”

“In my opinion he’s in the top three midfielders in the world, maybe the best right now. I heard what Alex Ferguson said about him being better than me. He’s probably right. Gerrard is England’s best player and he single-handedly got Liverpool into the Champions League.

“He is the complete player. He can score, he has a great final ball, he can tackle and he drives his team forward. He is a winner on the pitch, which is why I really admire him.”

“Everybody has their favourite midfield player. Some say Paul Scholes, some Roy Keane or Patrick Vieira or Frank Lampard. But the reason I always say Stevie, having played with him and against him, is because he encapsulated what they all do well rolled into one.

“He’s got a little bit of everything. He can score goals like Lampard, tackle like Keane… My dad summed it up perfectly when he first saw him play. He said, ‘He’s like Roy of the Rovers, that kid.’ That’s what Stevie is and that’s why they love him at Liverpool.”

“Of course he can also get forward as well, but he has all the qualities to defend. He has everything that a central midfielder needs to be a top player: he can shoot, he can pass, he can tackle, he can defend, he can run, he’s strong. He’s basically the complete player.”

“Steven Gerrard would be the captain of my World XI dream team. Gerrard is a complete player because he can play in every position and can do everything with a football at any time in a game.

“He’s a player who scores goals, who builds the play, he’s a sensational player.”

“I think of him as being at the same level as Pirlo. Vision, technique, but he is powerful as well. Stevie can do anything. It’s going to be very difficult for the team to find another player like him in the future.”

“While at Milan he Ancelotti came to me and said, ‘I want to sign Steven Gerrard to play next to you in midfield – what do you think?’ Without any hesitation I told him, ‘Do it – go and sign him.’ At this stage he was probably the most complete midfield player in Europe, of course I wanted to partner him.

“I remember asking Carlo a few weeks later how it was going, and he told me Gerrard had given a very firm no, that his bond with Liverpool was unbreakable. At the time Milan were the champions of Europe and probably had the best team in the world – it says a lot about Gerrard’s loyalty.”

“I think Steven Gerrard is a fantastic player. He has been loyal to his club, he has won some big trophies with the club. He feels more an international player rather than a normal English player.

“English players have big hearts, always fighting, very aggressive, but Gerrard, for me, feels more international. He has more skills than the normal player. Every time we play against Steven, the coach always says to be careful with that player because he is the player who makes the difference.”

“In terms of an influence on one club, you’d probably say Gerrard has been the best in the Premier League.

“If you talk about Liverpool players over the years – and they have had some greats – I have never once thought I’d like to put him in a Manchester United shirt. Gerrard was one – put him in a United midfield next to Scholes or Keane and wow, utopia.”

“He dons his Superman cape, comes on and changes the whole dynamic of the game. That is what great players do and this is one of the modern greats of the game.”

“For me, and I have always said this, he will be regarded as one of the greatest midfielders ever. No doubt.”

TRY A QUIZ: Can you name every player to score a Premier League hat-trick for Liverpool?