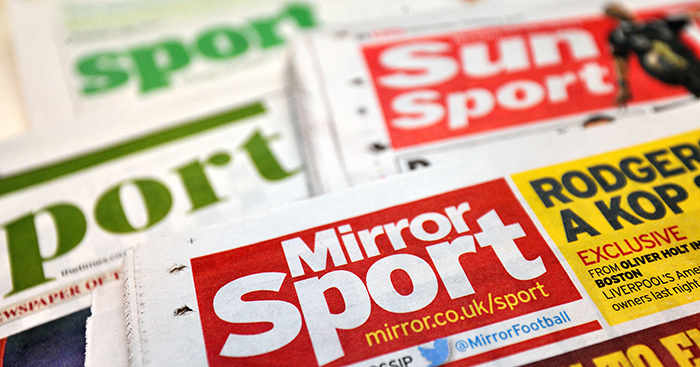 In this world nothing can be said to be certain, except death…and lots and lots of clichés during the transfer window.

With the never-ending stream of speculation comes a strange vernacular which, despite often being completely ludicrous, is somehow absolutely normal to all football fans.

Here is a (not exhaustive) list of some of the words and phrases you’re guaranteed to read and hear every time a transfer window comes along.

This is generally first heard in the weeks leading up to a transfer window, or when a new manager is appointed and handed a transfer kitty to help his new club achieve its objectives. Yet, strangely, it is almost always chequebooks which are used to pay.

Usually the preserve of the richest clubs, and more commonly heard in the summer, really fortunate managers get not a transfer kitty but a transfer war chest to go shopping with. We’re unsure at what point a kitty becomes a war chest, but we’re pretty certain David Moyes wouldn’t say it’s £30million.

Once managers actually start to make use of their transfer kitties or war chests, they are said to be on spending sprees. You wouldn’t say that after an expensive shopping trip into town, but for some reason it’s the most acceptable way to describe any football club that spends a reasonable amount of money.

One of the most bizarre terms on the list but also one of the most common. Think of any player that’s ever moved clubs, type their name + swoop into Google, and we guarantee you’ll find an example. Quite where the analogy of football clubs being birds came from we do not know, but it was probably the Eagles or Seagulls that did it first.

Theoretically reserved for when teams sign more than one player from a rival, in particular a struggling or recently-relegated club, but creeping in as the rival to swoop to describe any transfer, no matter the circumstances.

We’re back to the birds analogy again. Before the raid on the aforementioned stricken club actually takes place, vultures (almost always from the Premier League) are said to be circling, ready to pounce.

Used to describe almost every player under the age of 21, irrespective of what league they’re in, what experience they have or even whether the author knows anything about them. See also, starlet.

When managers are asked about rumoured interest in one of their star players, more often than not they speak of their determination not to lose them. More often than not, this is translated as a hands-off warning.

Sometimes these clubs simply do not want to sell their prized assets, but that does not stop rivals from trying their luck. Strangely, this one is only ever used before rather than after an offer has been made, i.e. Club A are ready to test the resolve of Club B to keep hold of their star man.

It’s one thing a journalist finding out about a transfer bid that has been made, or even a mere enquiry about a player, but we’re never quite sure how they find out these offers that may or may not be made.

However, we’re often told clubs are weighing up an offer for a particular player. Alternatives are mulling over, pondering and considering, but whether this is simply a cheeky way of reporting on a transfer that won’t actually happen we cannot say.

We’re back in unusual analogy territory again. This is another phrase generally reserved for that awful time between transfer windows, when players in good form regularly appear, apparently, on the radar of other clubs.

Once a player has appeared on said radar and a club decides they’re definitely interested, they get their bow and arrow out and add the player to their list of targets. Later, once a transfer is close to being completed, clubs take on the persona of a huntsman as they close in on their man.

Is there an actual mill somewhere where every transfer rumour is created? God, we hope there is. The rumour mill needs to be well staffed in the weeks leading up to a transfer window, of course, when it goes into overdrive.

As well as the aforementioned hands-off warning, another way a club can attempt to ward off interest in one of their star players is by slapping a price tag on them.

Occasionally a club’s determination to keep hold of a player pays off. After all, while every player has his price, even the richest of clubs will not be held to ransom in negotiations.

You know when you made that offer on that car but it was rebuffed by the dealer? What do you mean you’d never say such a word? Football clubs rebuff enquiries and offers on their players from rivals all the time.

‘Come and get me’ plea

When a player is asked about rumours linking them with another club, there are several ways in which they can respond. Sometimes they refuse to be drawn on the speculation, but that can be classed as refusing to rule out a move and so only fuels speculation. It’s a minefield, this.

What a club really doesn’t want to see from one of their players, however, is a come and get me plea in which they admit to being flattered by the interest from elsewhere. And when sources close to the player confirm they are keen on the move, well, it’s game over.

Any player tempted to issue a come-and-get-me plea really ought to be warned: doing so will result in your name being prefixed with wantaway every single time it’s written down until you finally move clubs.

Such a plea would put an interested club on red alert, but even something as innocuous as a player’s release clause being revealed can do that. Clubs rely on the media for all of their information, you see.

Talking of release clauses, there is only one word in the entire dictionary that can possibly be used when a club agrees to fulfil the terms. The fact it was so hard to write that sentence without writing triggering says it all.

Yet another word you wouldn’t dream of using in normal life that is commonly used in football parlance, to describe transfer bids which fall way short of a club’s asking price for a player or, indeed, their release clause.

Agreeing a fee with a club is only half the battle. For smaller clubs in particular when looking to sign fringe players from the big boys, wages can often prove to be a stumbling block.

For scupper, see derisory. If it weren’t for football, it’s a word you could go for 10 years or more without seeing, yet in this strange bubble it seems completely normal to read a potential transfer has been scuppered by rival interest, a manager being sacked or any other factor which can prevent a deal from being completed.

Literally the last thing any club wants to hear is that a rival club is set to scupper a planned transfer by hijacking it, invariably at the 11th hour.

Should two clubs be bidding for the same player, then they have to battle it out in a transfer tug of war. This is the case even if more than two clubs bid for said player, which really doesn’t make sense, but we love the idea of a player tied to a piece of rope as opposing managers attempt to get the deal over the line.

Sometimes, clubs are only temporarily scuppered in their efforts to sign a player. Transfers that are resurrected for this or any other reason are generally described as on-off moves.

With price tags to deal with, stumbling blocks such as wages to overcome and rival clubs threatening to scupper deals, it can take some time for a transfer to actually be completed. There are several roadblocks to overcome. Such transfers are, of course, always given the prefix protracted.

When transfers are protracted, it presents the media with a problem in that there is in nothing really to update us all on. Or at least it should do, theoretically.

In reality, of course, we are inundated with several updates on a transfer every single day as a player nears and then heads for the exit door at his current stadium. Sometimes, a manager even opens the door for a exit, usually with a completely anodyne comment.

A step up from protracted transfers, these are effectively a myth, an invention of the media’s, but when one potential transfer has been ‘reported’ on daily for an entire summer, everyone is glad when a long-running transfer saga comes to an end.

Used whenever more than one club is interested in signing a player and also a firm favourite on Deadline Day as clubs race to get transfers pushed through and then ratified in time. Such deals are said to be going to the wire.

Unless it’s a big football secret (like the rumour mill), there isn’t an actual transfer window. Yet at the end of every August and January, you can say with absolute certainty this non-existent window will be slammed shut. Let’s just hope everyone gets their business done in time.