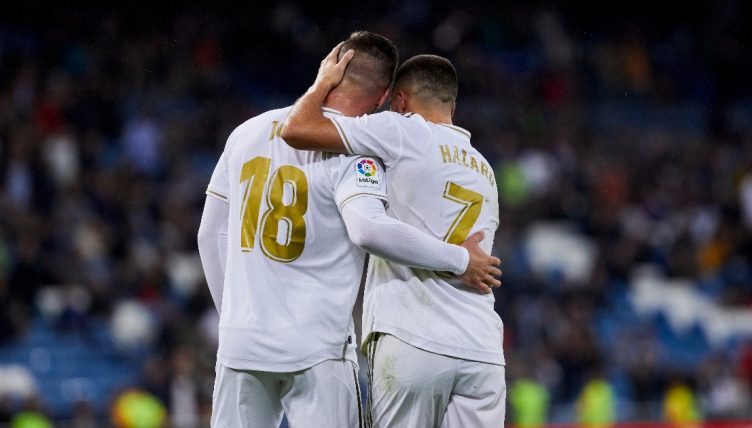 Real Madrid are potentially going to make the biggest transfer of a summer of big transfers, bringing in Kylian Mbappe from Paris Saint-Germain. But they may need to make room in their squad by shifting a few players out before the deadline.

When the club signed Cristiano Ronaldo and Karim Benzema back in 2009, Wesley Sneijder, Arjen Robben and Klaas-Jan Huntelaar all made way, while Mesut Ozil and Gonzalo Higuain left the exit door to help fund the record signing of Gareth Bale in 2013.

So we’re well aware of how Florentino Perez operates, meaning we can expect to see one or two more sales or loans if they’re to pull off the signing of the summer.

Sergio Ramos, Raphael Varane and Martin Odegaard have already left but they still could need to lift a little more weight off their still-heavy wage bill if they are to accommodate Mbappe. These are the five players who could make way.

Best singing voices… In, out, in, out, shake it all about, do the Mariano Diaz and you turn around, and you might be about to leave Real Madrid again, this time in direction of the North East of England.

That didn’t really fit with the melody, did it?

Anyway, Mariano Diaz arrived at Real Madrid in 2011, left for Lyon in 2017, went back again in 2018 and then… didn’t really play all that much. Of his 33 La Liga appearances over the last three seasons, 24 have come from the bench.

Now, Madrid are looking to sell and, according to some, Newcastle might want to buy. A fee has been set in the €10million region – which is equivalent to 952,380.95 pairs of Slazenger tracksuit bottoms and probably more than Mike Ashley wants to pay after shell(suit)ing out for Joe Willock.

We shouldn’t think Real Madrid have use for that many pairs of tracksuit bottoms. Mariano won’t want to be swapped for tracksuit bottoms either, we imagine. Especially Slazenger ones. But if Mbappe comes in, he’ll have to accept if he’s to get any playing time at all.

The former Arsenal man injured his ankle ligaments while on Olympic duty with the Spain U23 side, which may put some clubs off a last-minute move. But the midfielder remains a quality player who likely won’t feature that much in the all-white kit.

Let’s see if the two clubs can come to another solution. A loan with an option to buy, perhaps? Strikes us as a reasonable compromise. Thinking about it, we could make a fortune as deal brokers…

Real Madrid's Dani Ceballos with an absolute SCORCHER at the Euro Under-21 Championship 🔥🔥🙌 pic.twitter.com/PjJD8KE21g

Signed from Eintracht Frankfurt in 2019, Jovic failed to replicate the form that convinced Madrid to pay a reported €60 million for his services.

The Serbia international has only managed to notch two goals in Spain – a tally he doubled during a brief loan spell back at Eintracht in 2021.

It’s safe to say Madrid are ready to cut their losses with Jovic and AS claimed in June that Real had slapped a £35million price tag on the player, representing a significant loss.

Tribal Football reported that Manchester United were interested in the striker but that will surely not materialise now Cristiano Ronaldo is on the verge of a sensational return to Old Trafford.

Inter Milan were also rumoured to be planning a loan bid for Jovic, who remains available for transfer as the deadline approaches.

Having been signed from Mallorca for a cut-price fee as a teenager back in 2014, Asensio proved a revelation in his early appearances for Los Blancos five years ago. He finished each of his first two seasons with a double-figure goal tally and caught the eye for his penchant for scoring beauties.

But the last few seasons have been hampered by injuries and he’s struggled to nail down a place in the first XI, making him an obvious candidate to move on if Madrid are looking to recoup funds. Leeds, Leicester and Everton were all linked earlier in the summer, but take those reports with a tablespoon of salt.

1⃣ 2016: A rocket from Marco Asensio on his European debut 🚀 pic.twitter.com/xSar1DPFOK

Marca reckon Juventus are lining up a loan move for Hazard as their first-choice replacement for Cristiano Ronaldo.

Stranger things have happened, but not all that many.