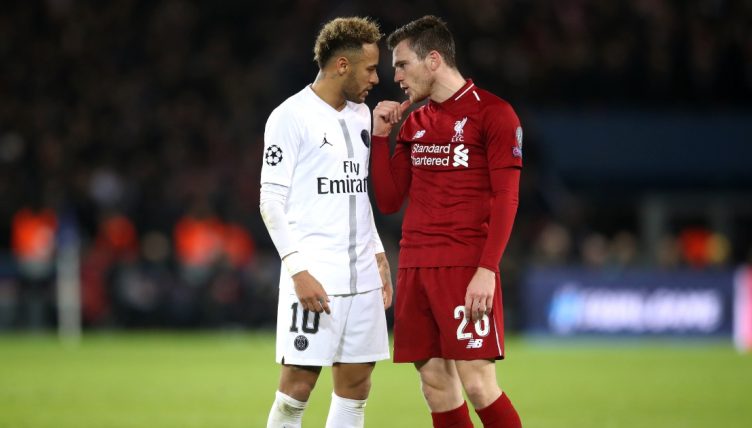 Andy Robertson has become a hero among Liverpool fans since joining the club in 2017 – and it’s not exactly hard to see why.

The bargain buy from relegated Hull City has developed into one of the best left-backs in the world at Anfield, lifting both the Premier League and Champions League trophies with the club.

And his colourful personality, which shines through on and off the pitch, further endears him to the Liverpool supporters.

Like the best Scottish players, Robertson has a bit of devil in his game and we’ve taken a look at nine times he was happy to be a bit of a sh*thouse.

Every Liverpool fan was in dreamland when Mohamed Salah completed his hat-trick at Old Trafford in October 2021 and put the Reds 5-0 up – but Robertson wasn’t satisfied.

As his team-mates flocked to Salah, the Scotland captain could be heard shouting: “”Come on lads. Keep going, keep going. Be ruthless!”

No mercy. We’d expect nothing else.

After a last-gasp James Milner penalty secured Liverpool a 2-1 victory over Leicester in October 2019, Foxes striker Perez lost his sh*t with Robertson at full-time to conclude a fiery encounter.

Cameras showed Robertson giving Perez a little shove as he celebrated the win amid suggestions the Spaniard had earlier laughed in the defender’s face after the Foxes grabbed an 80th-minute equaliser.

Perez responded by giving Robertson a proper shove after Milner’s goal and sparked a huge brawl between the two sets of players.

Scenes at full time as Perez and Robertson go at it.pic.twitter.com/6gkYnGIaxG

With Liverpool trailing Barcelona 3-0 after a heavy first-leg defeat in the Camp Nou in their 2018-19 Champions League semi-final, the Reds knew they needed to make things difficult for Messi and co in the return fixture.

Robertson took it upon himself to give Messi a not-so-warm welcome as the Argentine appealed for a free-kick in vain.

We wouldn’t want to suggest this was the reason Liverpool mounted a stunning comeback to win 4-0 and make it through to the Champions League final, but that’s exactly what we’re suggesting.

Staying with that unforgettable night against Barca, former Liverpool striker Suarez had taunted Robertson after Messi scored a stunning free-kick in the first leg and was also involved in the incident that saw the left-back forced off the field with an injury at Anfield.

When asked about his running battle with Suarez after Liverpool completed their comeback, Robertson kept things simple.

Andy Robertson is a savage 😂@DesKellyBTS: "You had a running battle with Luis Suarez and he took you out."

Robertson: "Who's going to the final?"

After Liverpool were beaten 2-1 at PSG in November 2018, Robertson hit out at Neymar’s tendency to fall to the floor quite easily.

“I suppose they were in the lead and they were looking to waste time. You can use gamesmanship, play-acting, you can use it all really,” Robertson told Sky Sports News after the game.

“I would like to know how much time they wasted tonight. It’s frustrating when [Neymar] is falling like he is.”

And towards the end of the match, it seemed like Robertson let Neymar know just how frustrated he was feeling.

After Sadio Mane was booked following a clash with Flamengo’s Rafinha in the 2019 Club World Cup final, Robertson promised his team-mate, “I’ll get him, don’t worry.”

And the left-back lived up to his word, leaving Rafinha in a heap on the floor in the second half and also having some strong words with the Brazilian at full-time.

“Sadio let me get him, i’ll get him don’t worry”

Best moment of the game, Robertson smashing Rafinha 7 mins into second half. Man of his word pic.twitter.com/3tMTr40qJo

After introducing Walker to the Anfield advertisement hoardings, Robertson trotted away from the scene of the crime with a big, fat grin on his face.

The Manchester City full-back immediately confronted his opponent, who feigned innocence in a way that only the truly guilty can muster. Wonderful.

Robertson after shoving walker to the advertisement boards
Robbo is an absolute prick and I love it pic.twitter.com/0HNA3eJqS0

Robertson may have risen to prominence as one of the world’s best full-backs at Liverpool, but the Scotland international hasn’t forgotten his roots.

Shortly after making the move to Anfield, Robertson’s former club, Dundee United, played their first derby against fierce rivals Dundee for over a year.

United triumphed 4-3 on penalties, and Robertson sent a cheeky message on Twitter to celebrate.

🔶See nothing has changed 🔶👀

As the Everton midfielder went in for a meaty challenge, the full-back made sure he landed on Davies with his elbow – and laughed in his face when he had the cheek to complain.