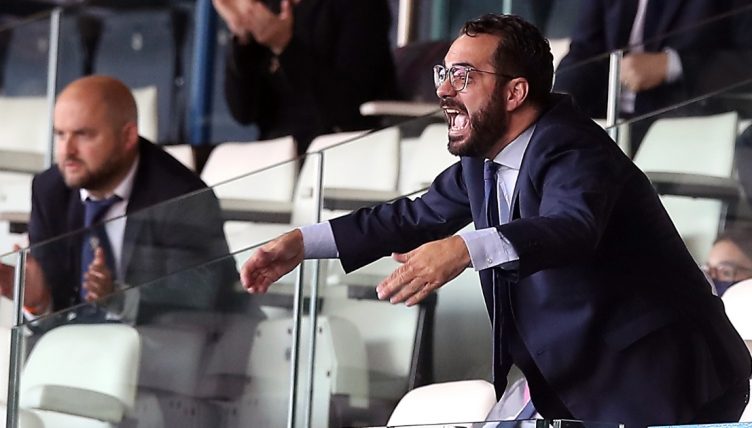 The famously outspoken, passionate Spaniard has often been the loudest person in the stadium during the behind-closed-doors matches, singlehandedly taking it upon himself to roar on Marcelo Bielsa’s men in the absence of supporters.

Having established himself as something of a cult hero at Elland Road for recruiting Bielsa and wearing his heart on his sleeve, director of football Orta has ruffled a few feathers since Leeds returned to the Premier League. Here are the best examples of his superb shithouse behaviour.

It’s unknown whose decision it was for Leeds to wear shirts protesting the new Super League proposals against Liverpool, but Orta would be a safe bet, given he’s turned up in the away end wearing an “against modern football” hoodie in the past.

With “football is for the fans” on the back and “Champions League: earn It” on the front, Jurgen Klopp was not best pleased to find the shirts waiting for his players in the away dressing room at Elland Road.

“I heard they have warm-up shirts but we will not wear them, we cannot, and if somebody thinks you have to remind us that you have to earn a go in the Champions League, that’s a joke. A real joke,” the Liverpool manager told Sky Sports.

“They put it in our dressing room and, if it was Leeds’ idea, thank you very much, nobody has to remind us, maybe they should remind themselves.”

Klopp isn’t the first ‘Super League’ coach to have been rattled on their visit to Elland Road.

Chelsea coach Thomas Tuchel was said to have been “unsettled” by Orta’s vocal presence in the directors’ box, to the extent he turned around and shouted back up at him from the touchline.

Thomas Tuchel arguing with Victor Orta, Leeds' sporting director, after Chilwell kicks the ball out because of Bamford's injury.

Tuchel: "Would you do it for our player?!" #CFC #LEECHE

The defining subplot to Leeds United’s time in the second-tier under Bielsa, Derby County’s players celebrated their play-off semi-final victory by miming binoculars, in reference to the infamous Spygate saga, which resulted in Leeds being hit by a £200,000 fine for sending a member of staff to take a look at Derby’s training methods.

Fast forward a year, and Leeds celebrated their Championship title win with a 3-1 victory at Pride Park, with Orta going particularly wild in the stands after the final whistle. The Leeds director had come prepared with actual binoculars, which he whipped out as he celebrated promotion with a flag.

Leeds United technical director Victor Orta was keen to remind Derby of 'spy-gate' after his side's promotion to the Premier League 🕵️ pic.twitter.com/MQ5NxLrwRl

With pressure mounting during Leeds post-lockdown promotion push from the Championship, Orta cut a particularly antsy figure in the stands.

By all accounts his behaviour – at odds with the quiet, respectful etiquette expected of boardroom staff – was exactly the same when packed with fans, but cavernous, hushed empty stadia made him stand out more.

“Decorum in the directors’ box has gone out the window in the last few weeks. To be frank, his behaviour’s been a disgrace,” Leeds managing director Angus Kinnear joked with reporters after promotion finally was sealed. “But we love him for it.”

Evidence of Orta’s antics being more suited to a packed-out away end than the swanky prawn sandwich vibe of the directors’ box was clear to see following Pontus Jansson’s late equaliser against Brentford back in October 2018.

Grabbing the face of Leeds chairman Andrea Radrizzani – his boss, no less – the Italian media mogul’s (undoubtedly very expensive) glasses got lost, while Kinnear, pulling him away with a nervous smile, played the part of the sensible mate that keeps things in check on a night out.

Leeds through and through.

“VAMOS LEEDS CARAJO!” – Victor Orta, Director of Football at #LUFC at tonight’s Player of the Year awards. (via @allmodcams)pic.twitter.com/yLfQGMxggL