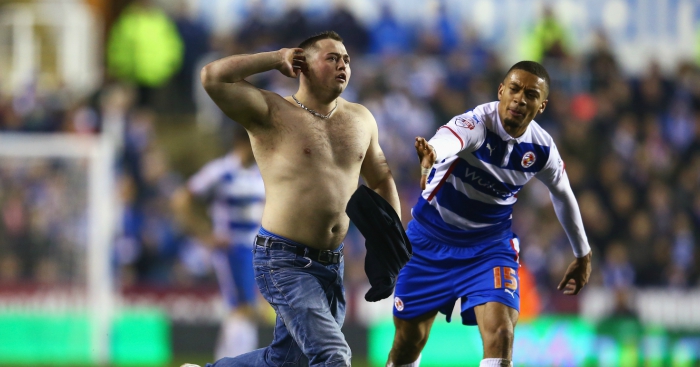 There are loads of reasons to love the FA Cup – and pitch invasions are right up there with the best of them.

For many people, the FA Cup is perhaps no longer perceived to be as big a prize as it once was. But the Magic of the Cup™ will remain for as long as lower-league clubs continue to come up against – and occasionally beat – the big boys.

And that means we can look forward to plenty more pitch invasions for years to come.

Invasions are usually reserved for scenes of jubilation, historic victories or giant-killings. At Manchester City in 1993, it was reserved for a consolation goal in a 4-2 quarter-final defeat in front of the cameras.

Expectations were growing at an unusually buoyant City, with Alan Hansen even tipping the club to win the competition. An early lead, however, soon turned to a 4-1 deficit.

Moments after Justin Edinburgh had a fifth ruled out by the offside flag, the ball was passed to Terry Phelan inside his own half. In a career which spanned almost four decades, Phelan scored only five league goals, but the left-back decided to keep running and running, until he somehow found he had calmly slotted the ball past Ian Walker.

The goal sparked something in the supporters, a mixture of confusion, surreal joy and frustration at unpopular chairman Peter Swales.

On they went, and soon after on came the police horses, resulting in a bizarre stand-off akin to an outtake from Green Street.

Possibly one of the most controversial ties in FA Cup history. Newcastle were big favourites in the quarter-final but found themselves 3-1 down to the second-tier outfit.

Due to overcrowding in the stands, Magpies supporters had already started climbing onto the pitch to watch the match directly behind the goal.

When Newcastle goalkeeper Pat Howard was sent off for arguing against a decision to award a penalty, which was duly converted by George Lyall for Forest’s third, the fans ran across the pitch towards the away supporters.

The scenes resemble a game of bulldog in the playground as policeman try desperately to tackle onrushing supporters. But the protest must have worked. After the players eventually returned to the field, 10-man Newcastle stormed back to win 4-3, backed by a vociferous and impassioned crowd.

Forest appealed against the result due to the unrest and the match was deemed void. Two replays were required at Goodison Park before Newcastle eventually triumphed.

Reflecting on the controversial fixture, Newcastle Chronicle journalist David Morton wrote: “For me, one thing is sure. The crowd at St James’ Park never roared louder than it did on that March afternoon in 1974.”

It’s hard to imagine now, but only a couple of years after winning the Treble, Manchester United were in strife. Arsenal were on their way to completing a league and cup Double, while Sir Alex Ferguson was all set to retire at the end of the season.

A run of five defeats and a draw in seven matches had put an end to their title hopes and they appeared to be exiting the FA Cup at the earliest possible stage when they trailed 2-0 at Aston Villa.

In typical United fashion, three late goals in the space of five minutes ensured they lived to fight another day and the fans duly showed their jubilation by celebrating with the players after both Ruud Van Nistelrooy’s winner and the full-time whistle. 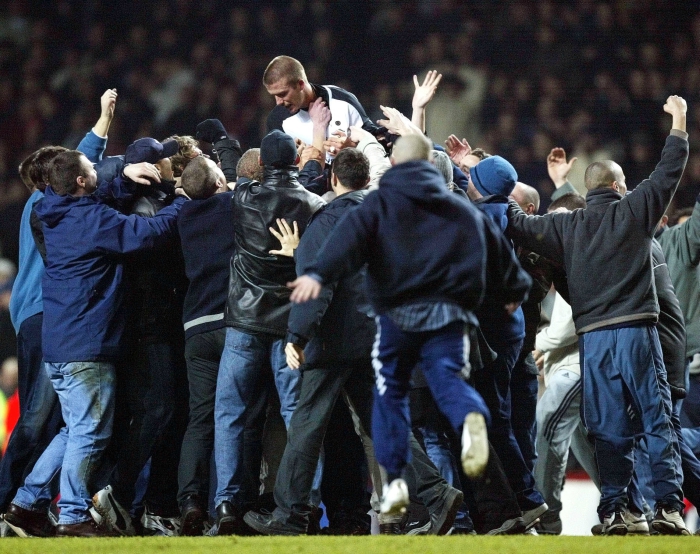 A different type of pitch invasion, as Joel Robles is given the runaround by a cat.

“I thought he had great style and movement,” an impressed Roberto Martinez commented after the game.

Everton’s 3-2 victory over Sheffield Wednesday will go down as one of the most dramatic FA Cup finals given the Toffees came back from 2-0 down to triumph 3-2.

Mike Trebilcock’s equaliser proved a bit much for ecstatic Evertonian Eddie Cavanagh. It has it all, this.

There’s the cartoonish way he rids his suit jacket to leave a bobby flailing on the floor, insult adding to injury when the officer’s hat bounces off his head while Cavanagh celebrates.

There’s the rugby tackle from the second policeman, who preemptively throws his hat to the ground in pursuit, finally cutting Cavanagh down.

There’s mixture of pride and relief in the exhausted Cavanagh – running the length of Wembley in a suit can’t be easy – as he accepts the chase is up.

And there’s the reaction of the Everton players who go over to tell all parties to calm down, we’ve all had a few.

We only wish we could have seen what Cavanagh did when Derek Temple scored the Toffees’ third.

Reading fans would celebrate their 3-0 victory, which put the Royals through to the quarter-finals, with a pitch invasion of their own.

But the hero of the day entered the field while the match was still ongoing, running over to the Bradford fans and proceeding to perform impressively acrobatic front flips, much to the delight of everyone in the ground.

There was only one place to end really, wasn’t there?

Ronnie Radford’s thunderous strike and the resulting pitch invasion of parkas and bobble hats can be found in a dictionary as the definition of The Magic Of The Cup.

It’s often forgotten, however, that Radford’s moment of magic was in fact the equaliser, not the winner against Newcastle.

Malcolm Macdonald, looking like the big kid in PE, albeit with massive sideburns, put Newcastle ahead, only for Radford’s seismic shot to change the course of the tie before Ricky George bagged a scruffy winner in extra time.

But it’s the celebrations to the equaliser which have lived longer in the memory.