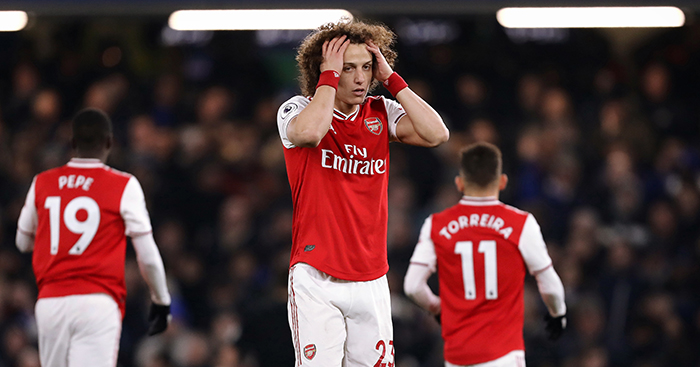 The Premier League is back, and this time it’s purely for armchair fans. What better time to sink your teeth into Fantasy Premier League?

Phew. For a minute there, it looked like all those Nick Pope clean sheets had been for nothing.

But FPL is back, thank goodness.

Although the game’s organisers handled the delay about as [insert your own satirical joke here] — weirdly letting the empty Gameweeks go on and on instead of just hitting pause on the whole thing — they’re atoning for their errors by handing out unlimited free transfers ahead of next week’s deadline.

So remember your login details, sell Jamie Vardy, and try to avoid these seven deadly sins ahead of the big restart.

Football is back, and so, naturally, is David Luiz trying to Gazza his way out of trouble 40 yards from Arsenal’s goal.

With unlimited transfers ahead of the restart, it’s tempting to load up on players from the north London club, who play twice next week.

But a 3-2 friendly defeat to Brentford doesn’t bode well for a trip to actual Manchester City. Sterling, Aguero and company will surely relish the opportunity.

In terms of actual football, the returns of Paul Pogba and Marcus Rashford are great news for Man United.

If those two can link up with Bruno Fernandes and Anthony Martial, we’ll be in for a treat.

But in terms of FPL points, things are less clear-cut. Who’s got dibs on free-kicks? Will Bruno keep taking penalties? Just how deep will Pogba have to play?

3. You’ll be tempted to cut down on Liverpool assets

Winning the league is now a formality, so Liverpool have nine games to give Adam Lallana his farewell tour. (You did it, Adam! It was all you!)

And since they start with the tricky task of a Merseyside derby, it might be tempting to cash in on TAA, Roberton, Salah or Mane to accommodate… I don’t know… Hector Bellerin.

That would probably be a bad move.

No, Liverpool might not be quite as motivated as before. But since all games will feel like televised training sessions, you probably won’t even notice.

4. You’ll focus all your efforts on the first Gameweek

Unless there’s a virus-related intervention, GW30+ will probably be the only Double Gameweek on the calendar.

That makes it tempting to fill your squad with Arsenal, Man City, Aston Villa and Sheffield United players.

As we’ve established, having faith in Arsenal is folly, and Sheffield United and Villa have fairly nasty fixtures on the horizon.

Don’t fall for it — unless you fancy mad Pepe Reina to nick a goal from a corner or something.

Turns out knowing your home stadium’s exact pitch dimensions isn’t very important when it comes to getting results.

Since the Bundesliga returned with empty-stadium matches, home teams have won just 21.7% of matches, down from 43.3% back in normal times. The 12th man is real!

We could witness a similar destruction of home advantage in the Premier League.

Villa, City, Newcastle, Norwich and Tottenham all get back into action with two consecutive home games, which could see an increase in transfers for their players.

Conversely, Arsenal and Sheffield United start with three consecutive away games — albeit with a Double Gameweek to soften the blow.

The takeaway? It might not matter at all; just pick good players.

6. You’ll mess up your chips

Since we’re only getting one Double Gameweek, it’s not clear how you should use any remaining Bench Boost, Triple Captain or Free Hit chips.

The good news is that you can make unlimited transfers ahead of next week’s deadline.

That lets you bring in players who play twice in the Double Gameweek. But what if you don’t want to saddle yourself with Arsenal or Aston Villa players for the rest of the reason?

If you’ve kept your Wildcard, you’re in luck…

As FPL expert Ben Crellin points out, you can use your unlimited quarantine transfers to load up on double-fixture players ahead of GW30+, and you can even play a Bench Boost or Triple Captain on top of that.

Then, ahead of GW31+, you can play your Wildcard to swiftly get rid of Pepe Reina and Hector Bellerin.

If you don’t still have your Wildcard, it’s less clear what you should do.

You really, really don’t want a squad full of Arsenal players, so some FPL experts are suggesting playing a Free Hit ahead of GW30+, forgoing the unlimited quarantine transfers altogether.

That way, you can temporarily bring in Oli McBurnie, then send him packing and reclaim your old, pre-restart squad ahead of GW31+.

Those were different times, mate.

Comparing the fixture difficulty of the Prem’s Champions League chasers