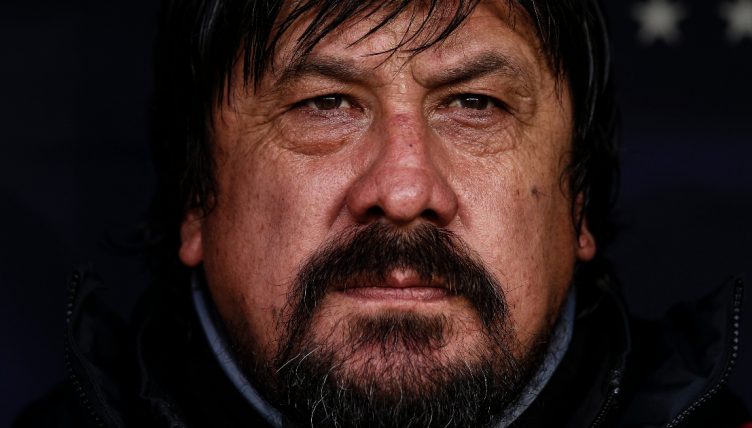 If you’ve watched any of Atletico Madrid‘s matches during the Diego Simeone era, chances are you’ll have noticed his bear-like henchman, German ‘Mono’ Burgos.

A cult hero at Atletico, as well as River Plate as their five-time title-winning goalkeeper in the mid-90s, Burgos is now embarking on his own career as a head coach, having been appointed as Newell’s Old Boys manager after leaving Simeone’s side last year.

Here are seven reasons we absolutely love the man.

Putting Mourinho in his place

“I’m not Tito, I’ll rip your head off!” were El Mono’s immortal words to Jose Mourinho, in reference to the time the Portuguese coach eye-gouged the late former Barcelona coach Tito Vilanova.

Needless to say, Mourinho stayed seated on the bench.

Not only is Burgos the proprietor of one of the best nicknames in football himself, El Mono – ‘The Monkey’ – thanks to his long hair, and long reach as a former goalkeeper, but he’s also said to have coined some of the most iconic.

Javier Saviola was first dubbed ‘‘The Little Rabbit‘ by Burgos, who was an experienced keeper at River Plate when the striker was first breaking through – and evidently a daunting player to come up against in training.

“I was left convinced that [my leg] was fractured. I hadn’t even debuted yet,” Saviola later recalled, having come off worse for wear in a one-on-one drill against Burgos, shortly before he made his first River appearance at the age of 16.

An early adopter of new tech

Back in 2014, Burgos was seen sporting state of the art Google Glass shades on the bench as Atleti took on Getafe, allowing the coach to see live statistical data in front of his very eyes.

“The product allows the analysis of games in real-time and the extraction of data from each game; clubs will have all the information about their own game, and of the sides they will face throughout the season,” said La Liga in a statement, having developed the technology alongside Google.

It was asked at the time whether it was “the future of coaching”. Surprisingly enough, it never caught on.

Donning a microphone in one hand and a tambourine in the other, Burgos fronted hard rock band The Garb (formerly Burgos Simpatia) through the late 90s and early 00s, juggling it with his commitments as a player whilst with River Plate, Mallorca and Atleti.

Wearing their Rolling Stones influence on their sleeve, the band released four albums between 1999 and 2005, while there’s a whole treasure trove of live performances on YouTube.

Eat your heart out, Slaven Bilic.

A wonderful double act, as former team-mates at Atletico and Argentina, Burgos was by Simeone’s side on the touchline for close to a decade, joining him at Serie A side Catania before Racing Club in Argentina and nine years together back at Atleti.

Simeone’s ex-henchman described the two as having an “an affinity beyond words”.

“He’s a friend, we’ve known each other for such a long time,” Burgos said when announcing he departure last year to concentrate on his own management career.

“We understand each other with gestures, without gestures, with a glance, with a headbutt. I’ve said this before but I’ve had lunch and dinner more times with El Cholo than with my own family.”

Taking Trippier under his wing

It’s always refreshing when English players look for a new challenge abroad, and Kieran Trippier’s move to Atletico in 2019 was no exception.

Instantly put through his paces by the La Liga club’s infamous drill-sergeant fitness coach Oscar Ortega, the right-back at least had kindly uncle Mono there to show him the ropes and get him adapting to his new environment.

“On Thursday evening, it was as if Burgos was man-marking Trippier, tracking his every step, talking through the positional exercises and taking up a position on his touchline in the game,” wrote Sid Lowe in The Guardian, having observed the England international in one of his first training sessions in Madrid.

“Close and within earshot, ‘Go, go, go; calm, calm, beri gud.’ At every turn and with every query Burgos was there. He was grateful for it.”

Here’s Mono Burgos working through Trippier’s positioning within the Atletico structure with him pic.twitter.com/u2XBbQblN3

Bielsa had entrusted Burgos between the sticks throughout Argentina’s qualifying campaign for the 2002 World Cup, in which they emphatically topped the South America’s round-robin table with a 12-point lead, winning 13 of 18 games, conceding just 15 goals, and losing just once.

Given that record, and the football they were playing, Bielsa’s Argentina went into the tournament among the favourites, but they failed to replicate their best football in Japan and South Korea, suffering a shock group-stage exit after losing 1-0 to England and only managing a 1-1 draw with Sweden.

Burgos had been dropped to the bench for the tournament but showed compassion amid all the dressing room tears.

“You cannot imagine the anger of someone who has played in all the qualifiers and has been discarded for the World Cup,” Simeone recounted, via The Quality of Madness: A Life of Marcelo Bielsa.

“Yet he stood up and took the manager in his arms. We were all crying but nobody turned on him, that shows the nobility of the man.”

And Burgos recently told ESPN that he believes Bielsa to be the best coach in the world, adding: “Bielsa is a creator of coaches. He is the coach’s college.”

One trait that Newell’s latest coach shares with the club’s biggest icon is reportedly the ability to analyse more than one match on video at a time.