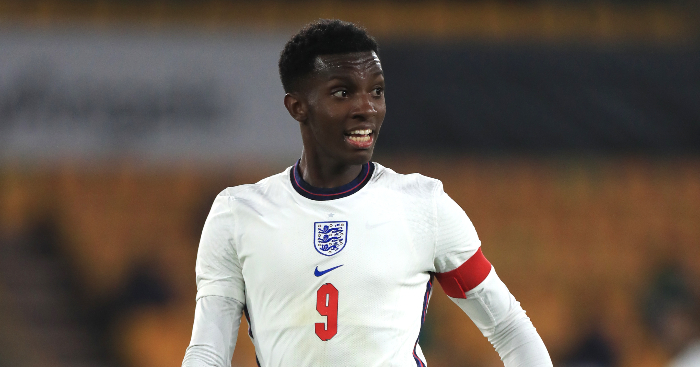 Arsenal striker Eddie Nketiah has secured his place in the record books by surpassing Alan Shearer’s long-standing record at England Under-21 level.

“Eddie’s a huge talent, a genuinely nice person,” said Under-21s coach Aidy Boothroyd after the 2-1 win over Turkey on Tuesday, which sealed qualification to next summer’s Under-21s Euro 2021.

“He’s great off the pitch for us and on the pitch he takes no prisoners. He’s a real warrior. To surpass Alan is a huge achievement.”

The Gunners forward only turned 21 over the summer but there’s a lot of excitement over this future, and it’s well-earned at that – as these stats and record demonstrate.

– With his 88th-minute goal against Turkey’s Under-21s, Nketiah is now England Under-21’s outright all-time top scorer. He has scored 14 goals in 12 games, leapfrogging Francis Jeffers and Alan Shearer to the top of the list.

– Nketiah has moved five goals ahead of Frank Lampard, Tammy Abraham and James Milner at England Under-21 level, and six ahead of Harry Kane.

– He averages a goal every 63 minutes at Under-21 level

– At all youth-levels for England, including Under-20 and Under-19s, he’s scored 23 goals from 23 appearances, averaging a goal every 77 minutes.

– Nketiah is similarly prolific at youth level for Arsenal. Between 52 appearances for their Under-23s and Under-18s at Premier League 2 and Academy League level, he scored 42 goals.

READ: Eddie Nketiah is so scary in front of goal he turned a keeper into a ghost

– Even though he was recalled halfway through his season-long loan at Leeds United last term, where he was not given a league start by Marcelo Bielsa until after Christmas, he still scored a respectable five goals, including three vitally-important ones – winning five points – from the bench in the Championship.

– He averaged a goal every 166 minutes in the second tier last term, putting him ahead of Leeds’ go-to man Patrick Bamford (216 minutes) and in the same kind of area as fellow Young Lions starlet Rhian Brewster (168 minutes in his half-season stint at Swansea).