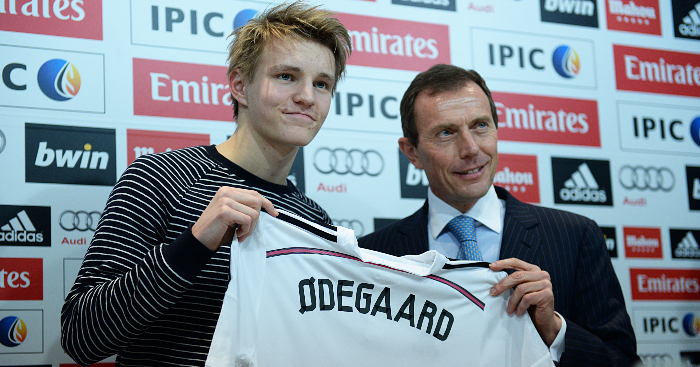 If reports are to be believed, Arsenal will soon add some much-needed creativity to their midfield with the loan signing of Martin Odegaard from Real Madrid.

It’s easy to forget that Odegaard is only 22 years old, given he originally burst onto the scene nearly six years ago, but it’s been a fascinating rise with plenty of ups and downs, ever since.

We’ve taken a closer look at his journey so far.

Making a name for himself

Before he became a massive talking point in major European football, Odegaard was first catching the eye in his native Norway after breaking through at boyhood club Stromsgodset.

He made his debut in April 2014 while still in compulsory education, denying him the chance to train in the daytime with his club – aged 15 years and 118 days, he became the Tippeligaen’s youngest-ever debutant and remains so to this day.

If they’re good enough, they’re old enough, as the old adage goes, and such was his precocious talent that he was racking up regular appearances in the Norwegian top flight before his 16th birthday.

“Being the goalscorer himself or the top assist maker is the essence in Odegaard’s game,” read an early Norwegian scouting report that year (via Scan Scout).

“He is the maestro and architect in offensive play and he creates and scores goals at any level in an impressive way. His quick mind allows him to quickly learn from mistakes such as losing the ball in tight areas and to avoid psychical battles when avoidable.”

Odegaard scored five goals in 25 appearances as Stromsgodset finished a respectable fourth place in the 2014 Tippeligaen, and he was establishing a reputation as the country’s hottest young talent since Ole Gunnar Solskjaer.

Still a long way from being able to buy a pint, Odegaard was linked with major clubs across European football after his breakthrough year in Norway. He trained with Liverpool and Bayern Munich and also visited Arsenal, but Real Madrid won the race for his signature in January 2015.

He might have been talented enough to start regularly in Norway, but Carlo Ancelotti’s side were the reigning champions of Europe and battling peak Barcelona for the La Liga title, so he had to be patient, continuing his development for the Castilla reserve side – managed by Zinedine Zidane.

The teenage prodigy got to make his Los Blancos debut in a final day dead-rubber at home to Getafe, brought on for reigning Ballon d’Or holder Cristiano Ronaldo at the hour mark. The Portuguese icon had already scored a first-half hat-trick, with the score at 5-3 when Odegaard was introduced, and Los Blancos ultimately won 7-3.

Martin Odegaard: “I really wanted to make my debut. It was the last game of the season. They told me before the game that I would play the last 30 minutes of the game…and I came on for Cristiano Ronaldo! It was a very special moment.” pic.twitter.com/aKfnudaIA0

Teething problems in the Spanish capital

A lack of first-team opportunities appeared to rankle the youngster, with reports in the Spanish press suggesting that he thought he was too good for the reserves.

“On three occasions, Castilla’s coaching staff have called meetings with the player and his parent to explain the situation and advise him to attend Castilla’s training sessions on a more regular basis,” reported AS in April 2015.

“Yet neither Odegaard nor his father seems to realize that changing tack and taking the advice they’ve been given on board is the right thing to do as the teenager’s progress with Castilla constitutes an essential part of his own development.

“Regrettably, some players have complained that the teenager ‘can’t be bothered’ with his Castilla team-mates and is only interested in being alongside Cristiano Ronaldo.”

Odegaard didn’t get a chance to make a second La Liga appearance in his second full season with the club, with Rafael Benitez in charge of the senior set-up following the dismissal of Ancelotti.

Even after Benitez was sacked, with Zidane promoted to first-team manager, no further first-team opportunities were forthcoming in 2015-16.

Developing away from the spotlight

Still, there is every argument that keeping Odegaard humble and away from the spotlight was the best decision for his long-term development.

There was now a clear pathway to the senior side, and he could take inspiration from the likes of Sergio Busquets and Pedro, who had won the Segunda B play-offs under Pep Guardiola for Barcelona’s B Team some years prior.

A first senior start did eventually arrive in November 2016, playing 90 minutes in a 6-1 Copa del Rey victory over Cultural Leonesa. But with Casemiro, Toni Kroos and Luka Modric excelling as a midfield three in the first team, there wasn’t a vacant spot to fill, so an 18-month loan to Heerenveen followed.

Going under-the-radar at the small Dutch outfit, he fell down the pecking order for Norway, going from the seniors back to the Under-21s, but playing regular football at a midtable top tier side may well have been what was best for him in the long-term. 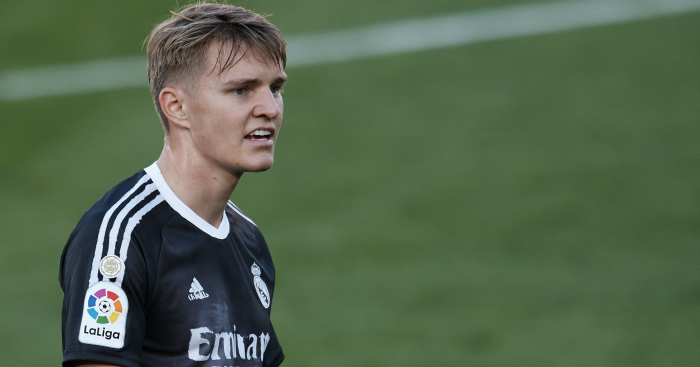 Further improvement in the Eredivisie

After 18 months as a steady presence in the Netherlands, there was an opportunity for Odegaard to take a step forward in the summer of 2018. Vitesse had a void to fill in their midfield after Chelsea starlet Mason Mount went to join Frank Lampard at Derby.

With former Russia and Hull City coach Leonid Slutsky at the helm, there was an astute and interesting manager to work under, and a decent team – including Chelsea trio Charly Musonda, Jake Clarke-Salter and Eduardo – around him.

Odegaard went on to be one of the players of the season in the Eredivisie, scoring nine goals and registering a further 12 assists. Only Ajax’s Hakim Ziyech averaged more chances created.

Realising his potential in La Liga

The Norwegian had now performed at a level where he was evidently ready to be tested regularly at the highest level, so another loan, a two-year deal at a young and vibrant Real Sociedad side managed by Imanol Alguacil, was a natural next step.

And he continued to take the opportunities that fell his way, looking outstanding as La Real punched above their weight to challenge for Champions League qualification.

They were doing that with Odegaard as the creative fulcrum of the team, regularly demonstrating some awe-inspiring – dare we say it, Zidane-esque – technical ability from the centre of the park.

The Guardian’s Spanish football columnist Sid Lowe was so impressed in the early weeks of the season that he was left fawning after a particularly brilliant assist for Mikel Oyarzabal to open the scoring in a 3-0 win over Alaves.

“That was outrageously good from Odegaard,” Lowe tweeted. “Woof. What a player! Genuine case to argue he’s best in La Liga so far this season. Brilliant.”

We bloody loved it, too. 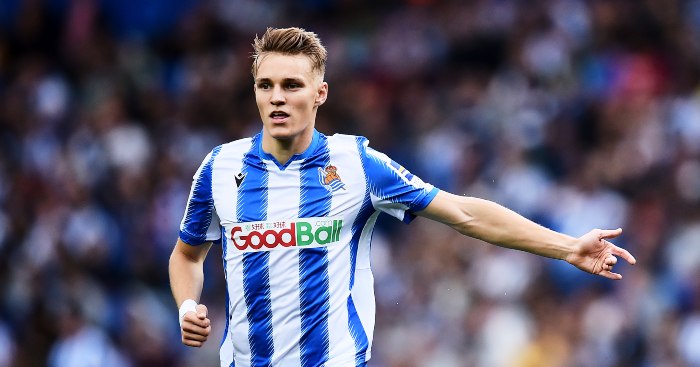 There was an argument that Odegaard faded a little post-lockdown, but he had shown more than enough during his time at Anoeta for Madrid to pull the plug on the two-year loan and bring him back a year early.

Finally, five and a half years after first joining, there looked to be a place for him at his parent club. And he did get some chances in the early weeks of the season – three starts in La Liga, two in the Champions League – but has gradually faded into the background once again.

Kroos and particularly Modric continue to defy time as undisputed starters in the midfield, while even when in need of inspiration off the bench during a mid-season slump in form, Zidane has remained reticent to call upon him.

It’s been frustrating to see Odegaard suffer a set-back just when he was starting to realise his potential as a superstar, but Madrid’s loss will be Arsenal’s gain.

You think we can’t compare Odegaard to Messi after that? We can and we will