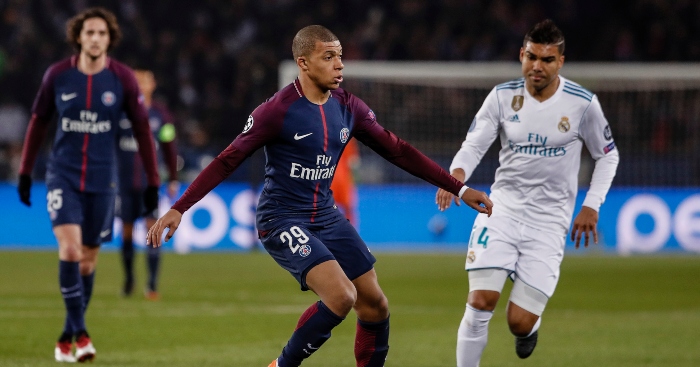 If history has taught us anything, it’s that when Real Madrid make it clear they want to sign a player, they usually get him.

Los Blancos have had no trouble signing the best players around, even if that means breaking transfer records (Ronaldo; Bale), recruiting from fierce rivals Barcelona (Figo) or waiting it out until a player eventually makes the switch (Courtois; Hazard).

There’s talk of Kylian Mbappe being next on the list, after manager Zinedine Zidane spoke highly of his compatriot, and it wouldn’t be the first time the club – or someone associated with it – publicly flirted with a transfer target.

“I am in love with him. Firstly, as a person because he came here to do a trial a long time ago,” Zidane said ahead of Paris Saint-Germain’s trip to the Bernabeu in the Champions League.

Mbappe wouldn’t come cheap, having cost PSG €180m from Monaco, but we could yet reach a situation where his head is turned by the man who masterminded France’s 1998 World Cup triumph.

Another member of France’s victorious 2018 World Cup squad, Pogba was spotted with Zidane in Dubai over the summer.

The Real Madrid boss claims that was a chance encounter, but he has made no secret of his admiration for the Manchester United man.

“I know him personally. He’s a different kind of player, he brings so much and they are few players who bring as much as he does,” Zizou said in March.

The boss respectfully noted that Pogba remains a Manchester United player, but that didn’t put an end to the flirting, as he said “If when he finishes his experience at United he wants to come here why shouldn’t he come to Real Madrid?”

Zidane and Pogba met in Dubai purely “by chance” 👀 pic.twitter.com/RM6WnC5KCq

Zidane isn’t the only one who has let his feelings be known about transfer targets. Indeed, club president Florentino Perez has been just as busy in that sense.

Perez was involved in moves for the likes of Mesut Ozil and James Rodriguez after the pair starred at World Cups, and Hazard was no different.

We’ve been trying for a number of years to make Hazard a Real Madrid player, but we haven’t achieved it yet,” Perez said in May 2019, after failing to secure a deal after the 2018 World Cup.

“I’d really like Hazard to come to Real Madrid and really hope he does. He is one of the best footballers.”

Weeks later, he had his man, though the early stages of the Belgian’s time in Spain suggest sometimes you need to be careful what you wish for.

When Perez returned to his role in 2009, the media anticipated a summer of huge spending. The budget available to the club – and manager Manuel Pellegrini – meant the level of flirting probably wasn’t absolutely necessary. But it didn’t hurt.

Cristiano Ronaldo was one of the main targets, having led Manchester United to back-to-back Champions League finals, and Perez said “I have not seen anything about him that would prohibit him from playing at Real Madrid.

“I have seen him get angry because he wants to win and [because of] his competitive spirit. The information I have on him says that he is an example on the pitch, a model,” the president added.

Perez’s comments have often been very on-the-nose, and the chatter around Bale was no exception.

“Bale was born to play in Madrid,” the president said in 2013, as the Welshman wrapped up a phenomenal season with Tottenham in the Premier League.

When Real Madrid speak about you in such glowing terms, you’ll find it hard to turn them down. Sure enough, Bale made the switch that very summer.

Six years later, he is still at the club, though that doesn’t exactly tell the full story.

“I can only be honoured to hear that a club like Real Madrid are interested in me,” Kaka said in 2009.

It’s the sort of line we see regularly these days: players staying humble and ostensibly committed to their club, but when Real Madrid are involved there’s always a chance the decision has been made in their head.

The Brazilian did indeed move to the Bernabeu that summer, for a then-record €68.5m. However, injuries meant he was never fully able to reproduce the form he showed at AC Milan. 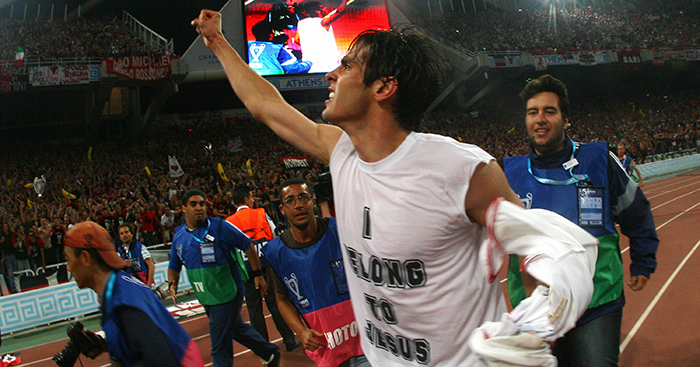 READ: A tribute to Kaká, the ‘rare piece of talent’ who belonged to Jesus

Sometimes flirting isn’t so obvious. Sometimes someone will publicly play hard-to-get, knowing full well what the target of their affections will recognise in the subtext of their words.

April 2003: Real Madrid issue a statement including the line: “Against the general policy of the club which never uses official sources to reject rumours, this press release has been issued with the objective of putting an end to the growing speculation which has circulated without any foundation linking Mr Beckham with Real Madrid.”

June 2003: David Beckham signs for Real Madrid, saying: “I know that I will always regret it later in life if I had turned down the chance to play at another great club like Real Madrid, which also has world-class players.”

The midfielder might not have won as much as he’d hoped in La Liga, but his benefits to the team went beyond the pitch.

And a bonus entry…

Not a player, here, but probably the most egregious bit of flirting you can even hope to get away with.

“I’m ready to admit to some mistakes but Mourinho’s hiring is an opportunity that Madrid could not miss,” Perez said in 2010. When the Portuguese was still under contract with Internazionale.

Obviously, Perez got his man. He almost always does.