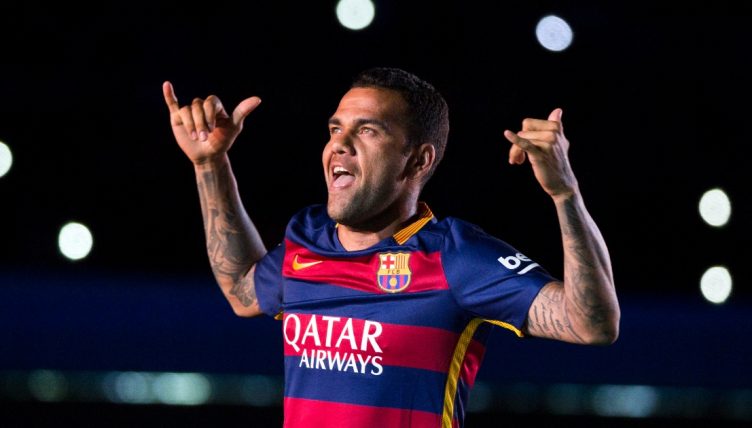 Barcelona’s greatest-ever right-back Dani Alves is back at the Camp Nou. The Brazilian has rejoined the club as a free agent after five years away to play under Xavi.

Alves’ time at the club coincided with the most successful period in the history over the Catalan club, making some truly mind-blowing records and statistics inevitable.

Still going strong at the age of 38 and eyeing up a spot in Brazil’s squad for the World Cup in Qatar next year, it will be fascinating to see how the veteran full-back gets on. If he’s half as effective as he was during his first stint, then Xavi has a serious player on his hands.

Here are eight of the best records and stats from Alves’ first spell with Barcelona.

– That works out as 2.8 trophies a season, and a piece of silverware lifted every 17 games at Barcelona.

– Further trophies won with Brazil, Bahia, PSG, Juventus, Sevilla and Sao Paolo make him the most single decorated male footballer in the history of the sport. 46 trophies in total – half of them at Barca.

– 43 of Messi’s 672 Barcelona goals were assisted by Alves. Andres Iniesta (44) and Luis Suarez (54) are the only players to have assisted more of the Argentinian’s goals.

– Alves averaged 30 La Liga appearances (48 in all competitions) a season at Barcelona. Ever-present.

– The Brazilian sits 13th in Barcelona’s all-time appearance-makers. Lionel Messi is the only foreign player to have made more.

– In 208 appearances under Pep Guardiola, Alves registered 68 assists and 15 goals. That works out as a direct goal contribution every 214 minutes – for a right-back. To put that in context, modern equivalent Trent Alexander-Arnold averages a goal or assist every 255 minutes under Klopp at Liverpool.