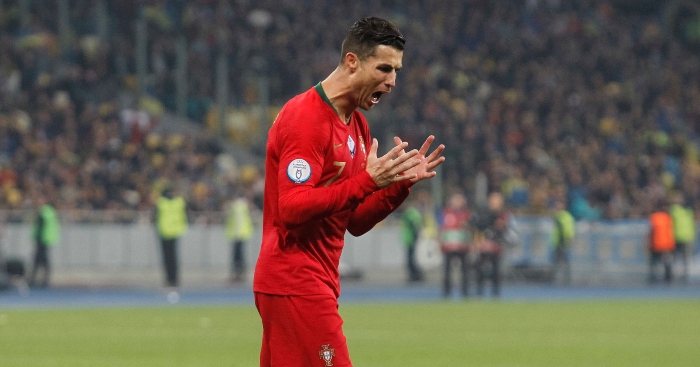 Portugal may have lost their big Euro 2020 qualifier in Ukraine, but that didn’t stop Cristiano Ronaldo reaching another milestone.

The Juventus forward scored his 700th career goal in Kiev, halving the deficit from the penalty spot to edge closer to 100 international goals. His 700 are comprised of five for Sporting Lisbon, 118 for Manchester United, 450 for Real Madrid, 32 for Juventus and 95 for Portugal.

If that doesn’t sound impressive enough, we’ve picked out a few stats to give an idea of just how far ahead of the curve he is.

– Ronaldo is now just 14 goals shy of equalling the record of Ali Daei, who scored 109 time in 149 games for Iran, as the highest international goalscorer in history.

– Only five other players in history have scored 700 or more goals; Brazilian greats Pelé and Romário, plus Josef Bican, Ferenc Puskas and Gerd Muller.

– Ronaldo is now four clear of Robbie Keane as the all-time top scorer in European Championships qualifying, with 27 goals to the Irishman’s 23. In terms of active players, only Robert Lewandowski (18 goals) and Artem Dzyuba (17) are within 10 goals of the Portuguese.

– His 95 international goals have come against 41 different countries.

– He has scored four or more international goals against 10 different opponents.

– Ronaldo has scored in qualifying campaigns for seven different major tournaments, and in the finals of two more.

Ronaldo converts his penalty. This was his 700th goal for club and country. An astonishing achievement from a remarkable footballer. 👏🏻👏🏻

– If a player was to score 40 goals for the next 15 seasons, they would still be 100 goals shy of Ronaldo’s record.

– Pauleta and Eusebio, Portugal’s second and third highest goalscorers of all time, have 15 fewer international goals combined than Ronaldo does on his own.