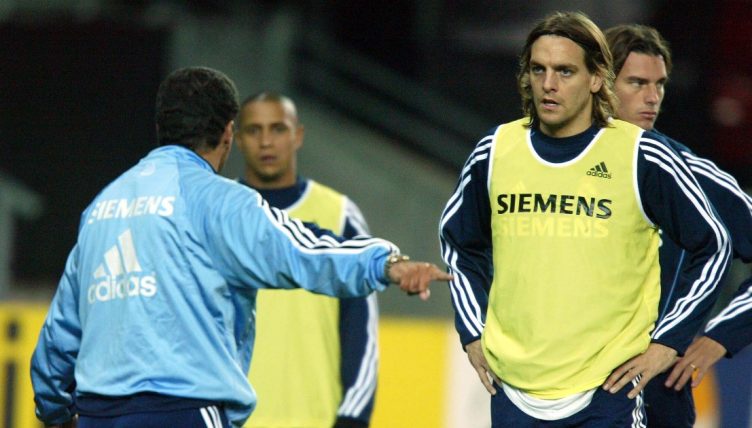 As one of the biggest and richest clubs in world football, Real Madrid have never been shy when it comes to spending big money on transfer fees.

But for every Cristiano Ronaldo or Zinedine Zidane, there are of course going to be some high profile slip-ups.

We’ve taken a look at some of those who were supposed to set the Bernabeu alight but never quite managed to pull it off.

Starting off with the poster boy of Real Madrid transfer flops.

Woodgate did genuinely look like the real deal during his time at Leeds and Newcastle, with the potential to go on and become one the world’s best centre-backs, so at the time there were few raised eyebrows when Madrid opted to swoop in for a £13.4million transfer in 2004.

Things got off to a bad start for the then 24-year-old at the Bernabeu though, spending over a year out with injury thanks to a previously undetected thigh problem.

And things only got even worse once he actually go onto the pitch, scoring an own goal and getting sent off in what has since gone on to be considered the worst Real debut ever.

Woodgate would go on to make just eight more appearances for Madrid, with the club eventually cutting their losses in shipping him off to Middlesbrough in 2007.

To add even more salt to the wound, three months later the centre-half would go on to be voted by fans as Los Blancos’ worst signing of the 21st century.

Jonathan Woodgate’s Real Madrid debut in 2005 after signing from Newcastle for around €17M pic.twitter.com/vpJmZqJRgb

The signing of Anelka was always set to be a risky one. During his time at Arsenal the Frenchman had gained a reputation for his temperament as much as he had for his goal-scoring abilities – but Real still opted to sign him for a whopping £22.3million in the summer of 1999.

It was not a move that would prove fruitful though, with Anelka lasting just one season at the Bernabeu. It was eventful, at least.

It took him over five months to score his first goal for the club before eventually getting suspended after refusing to train following a disagreement with manager Vicente del Bosque.

There were some high points for the then 21-year-old though; he netted his first La Liga goal in his sole El Clasico appearance and even picked up a Champions League winners medal in his home city of Paris as Real romped to a 3-0 final victory over Valencia.

The good times were just too few and far between, however, and after just seven goals in 31 appearances the Spanish giants decided enough was enough, selling him to PSG less than 12 months after his arrival.

The hype over the young Dutchman was real following his signing from Feyenoord in 2007.

A versatile player who could operate on both wings as well as at full-back, Drenthe featured regularly during his first season at the Bernabeu and hopes were high he could develop into a truly world-class player.

Following the emergence of Marcelo however, his first-team opportunities quickly began to dry up and a long string of loan spells would follow.

The wide-man would eventually leave the club for good in 2012 with spells at clubs including Reading and Sheffield Wednesday to follow. At least he has a rap career to fall back on.

Of all the signings on the list this one, at least on paper, seems to make the most sense.

Essien had become one of the best and most consistent holding midfielders in Europe after being brought to Chelsea by the manager Jose Mourinho in 2005 – so when Mourinho opted to bring in the Ghanaian on loan to Real in 2012 it seemed like a natural fit.

The Portuguese manager even referred to midfielder as his “son” during his introductory press conference, with Essien in return calling him his “daddy”.

His spell at the Bernabeu would prove to be rather uneventful, however, being used largely as a bits-and-pieces player and never quite managing to break through into the first team as the club failed to retain their La Liga title – finishing a distant second to champions Barcelona.

The final nail in the coffin for Essien’s time in the Spanish capital came with Mourinho’s departure from the club in the summer of 2013 – bringing to an end a move that had so much potential but never really delivered.

This move just felt so right at the time.

Even after the emergence of Messi and Ronaldo, Kaka was still considered one of the best players in the world in 2009, so joining the world’s biggest club felt like a match made in heaven – but things just never quite came together for the Brazilian in Madrid.

Kaka’s time at the club was badly hindered by injury, and his progress was severely hampered after undergoing serious knee surgery in 2010.

His silky skills and playmaking abilities struggled to translate to the slightly more physical La Liga, with the Balon d’Or winner eventually being knocked out of the first-team by a young Mesut Ozil.

Another player thwarted by injury, Sahin’s time at Real Madrid can only best be described as something of a nightmare.

Upon his signing from Dortmund in 2011, the higher-ups at Real thought so highly of the Turk’s potential that they awarded him a jaw-dropping six-year contract – though he would leave the club just three years later after making only four La Liga appearances.

Even a season-long loan spell at Liverpool during the 2012-13 season didn’t help turn things around, with Sahin returning to Dortmund in 2014 for just £7million.

The only player on this list currently still on the books at Madrid, Jovic was signed in 2019 for a fee of around £50million after a 25 goal season at Eintracht Frankfurt with aspirations that the Serbian would become the long-term replacement for Karim Benzema.

But 38 appearances and just two goals later things already seem to be unravelling for the 23-year-old.

Partly in thanks to the dramatic return to form of Benzema and a lack of minutes on the pitch, he has never managed to translate the power and ruthlessness that he was known for after his spell in Germany.

Things culminated with the young forward being loaned back to Frankfurt last season where he again failed to deliver.

There is still time for things to turn for the striker, but currently he seems to be badly struggling from a lack of confidence in front of goal.

After being tipped to be “the next Dani Alves”, Real forked out £31million to sign right-back Danilo from Porto in 2015.

Despite the hype, Danilo struggled to make an impact during his first season, rarely playing and when he did ending up with the unfortunate record of the side losing every game he started.

The lowest moment for Brazilian however, came when scored a comical own goal against Celta Vigo which saw Real eliminated from the Copa del Rey.

Even though he rarely featured, Madrid did manage to recover nearly all the money they paid for him – sending him to Manchester City for £26.5million in 2017 where he, unfortunately, flopped once again.

2007-2009 almost seem like the forgotten years of Sneijder’s brilliant career.

He moved to Madrid for a fee of £27million but scored just eleven goals in two seasons, and despite being given the No.10 shirt for his second campaign he was sold to Inter Milan in the summer of 2009.

Fortunately for Sneijder though, he had the last laugh, after winning the treble in his first season in Milan.