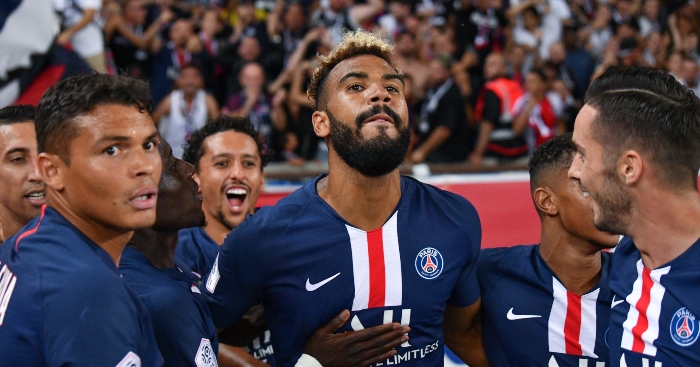 Just because a player leaves the Premier League doesn’t mean he’s necessarily on the way down in his career.

The new season might just be a few weeks old, but some of those no longer in England’s top flight have wasted no time reminding us they’re still around.

We’ve already seen some fantastic goals from players who starred in the Premier League, as well as some who never got much of a chance in the division, and one or two who might yet return.

Vellios was very young when he made his Premier League bow for Everton, scoring the first of his three Toffees goals as a teenager.

The striker is now back in Greece, via a stint with Nottingham Forest, and got his Atromitos career off to a wonderful start with a belter against Lamia in the Super League.

You won’t see many bicycle kicks caught better than this all season.

Another man with Everton connections, Kenny is spending the season on loan at Schalke in the Bundesliga. So yes, he’s not technically ex-Premier League, but we’re playing fast and loose with the rules.

The Englishman isn’t the only former Premier League man playing for David Wagner’s side – Nabil Bentaleb, Benjamin Stambouli and Matija Nastasić are among the others to have spent time in England – but he was the first of the group to score in the 2019-20 campaign.

Kenny was also the first Schalke player at all to find the net in the league, with his very satisfying daisycutter wrapping up a 3-0 victory over Hertha Berlin after two earlier own goals.

Former West Brom man Blanco has been a real find for the Portland Timbers, scoring 22 goals in 85 games for the club.

The most recent of those came in a victory over Vancouver, setting his team on the way to a 3-1 victory.

The Argentine played his part in the Timbers’ run to MLS Cup in 2018, scoring in the play-offs, but nothing was as special as this blast from range.

Ex-Arsenal forward Vela has been tearing up MLS, scoring at a rate of better than a goal a game in his second LAFC season.

Previously known as a chip merchant, the Mexican has been adding more strings to his bow en route to putting his team on the verge of a play-off spot with games to spare.

One of the recent highlights was this solo effort against the San Jose Earthquakes, complete with a wonderfully disrespectful finish.

We’ve known for a while what Kolarov can do, but that doesn’t make it any less impressive when he actually does it.

The former Manchester City left-back has a rocket of a left foot, with set-pieces his speciality, and he demonstrated just that while playing for Roma against Genoa.

We all know goals are better when they go in off the bar, and those which barely even cross the line are arguably one step up even from that.

Staying in Serie A, here’s Higuaín doing something he never showed he was capable of during his time at Chelsea.

The Argentine returned to Juventus after a not-that-special five goals in 18 games but is already off the mark for the 2019-20 season in some style, creating a goal out of nothing just like the Gonzalo Higuaín of old.

Maybe it was the knowledge that he might be in Turin for the long haul, or maybe it was the opportunity to silence his former employers Napoli. Whatever the reason, this is likely to be one of the best goals he scores this season.

You don’t tend to see a ton of players move from Stoke City to Paris Saint-Germain, and Eric Maxim Choupo-Moting added credence to that with a horror miss for PSG last season.

However, after returning for a second campaign in the French capital, the Cameroonian showed it wasn’t a completely ridiculous transfer with this sensational solo goal against Toulouse.

Di María is no stranger to brilliant goals, having scored plenty for Benfica and Real Madrid and at least one beauty for Manchester United, and he got off the mark for 2019-20 in some style.

Yes, we’re counting the Trophée des Champions as part of ‘this season’, especially when it featured a goal like this from the Argentina international against a Rennes team that beat PSG to the 2019 Coupe de France on penalties.

Oh, did we mention it was the winner?

Lyon’s 6-0 win over Angers was about as straightforward as they come, but it did feature a delightful finish from former Manchester United winger Memphis.

The Dutch international has got his season off to a flyer with four goals in as many games, and his career-best tally of 28 in one year (for PSV) could be under threat if he continues at this rate.

The pick of the quartet was one of two against Angers, and owes as much to the lovely scooped through-ball from Hossem Aouar as it does to the finish. Could Lyon improve on last season’s run to the Champions League last 16?