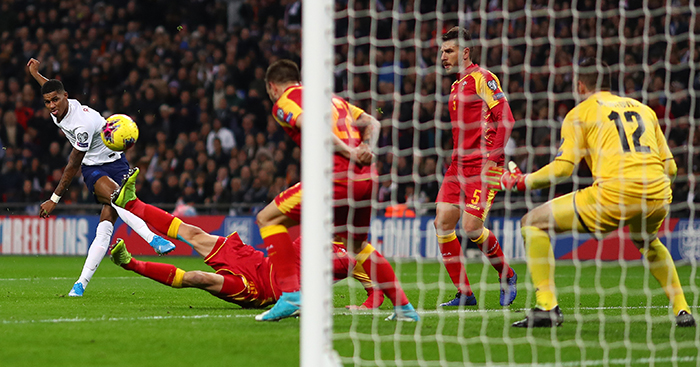 England completed their Euro 2020 qualifying campaign with a 4-0 win over Kosovo on Sunday as international football took centre stage for the final time this year.

Top-flight clubs around Europe may have had a weekend off, but there were still plenty of wonderful goals scored and, as always, at least one hilarious moment of bad football.

Here’s a selection of our favourite things from the weekend just gone.

There’s just something very pleasing about a first-time finish.

This was pretty tasty too.

Kosovo wanted to say thank you to England and they certainly did that.

You've never seen something like this before and probably won't again.

The future is bright.

The pass, the touch, the finish. This was lovely.

If there’s a better way to respond to racist abuse, we’re yet to see it.

The match between FC Den Bosch and Excelsior was stopped in the 28' due to racist chanting from Den Bosch supporters towards Ahmad Mendes Moreira, the match was resumed shortly after that and Moreira scored.
You love to see it 👏👊pic.twitter.com/7vJa5Epmsk

He’s going to be really good.

Kubo vs. 3 Columbian players from r/realmadrid

You know you’ve had a heavy night when you’re a keeper and forget where your area is (15 seconds in).

A strike in anger.