A 1-11 of the worst squad numbers in history, ft Arsenal, Liverpool, Chelsea 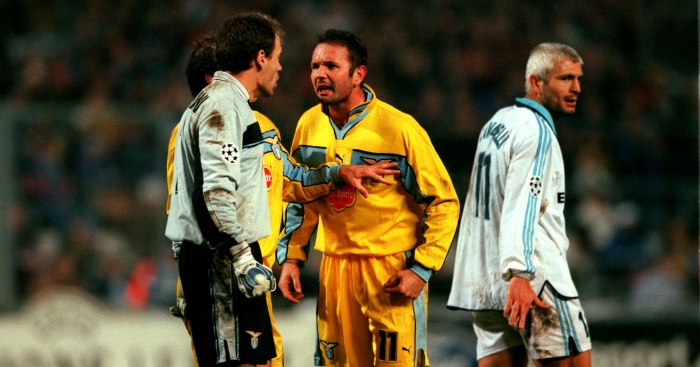 As squad number enthusiasts, we’re of the firm belief that there a few finer sights in football than a team lining up in the numbers 1-11.

But sometimes players choose to bastardise those hallowed numbers, opting for them despite playing in a completely wrong position. Worse still are the clubs that allow them to.

We’ve compiled a 1-11 of the worst players to wear each respective number.

We’d like to give an honourable mention to Derek Riordan, who wore No.01 for a period at Hibernian as the No.10 was taken, but there was always one clear winner here.

Davids’ spell at Barnet was completely bizarre for a number of reasons, not least the fact that he was there in the first place, but he really took the biscuit assigning himself the No.1 shirt – especially considering he then went on a run of three red cards in five matches and decided not to travel to away games in distant reaches of the country.

We kind of admire the brass balls of the man tbh.

There is a surprising amount of competition for the traditional right-back’s shirt.

Goalkeepers Joe Wildsmith and Emiliano Viviano cheekily wore the shirt after becoming quite literally the No.2 stopper at Sheffield Wednesday and Sampdoria, respectively.

Abou Diaby wore No.2 throughout the majority of his time at Arsenal but was at least often deployed in a defensive role in front of the back four.

As forwards, Arouna Kone and Clint Dempsey make us wince, although both occasionally played on the right wing, which is at least the correct side of the pitch.

That leaves Bony, who really has no excuse for taking the number when he returned to Swansea in 2017, despite the No.9 being available, as it was his second spell at the club.

Swansea were relegated at the end of the season. They deserved it.

Xabi Alonso can count himself lucky, but we just can’t get angry at that right foot.

Asamoah, we love you too, we really do, but you know this is unacceptable.

The number four shirt is a funny one. In some countries it’s more associated with a centre-back, which is fair enough, but we prefer to think of it belonging to a tough-tackling, holding midfielder. It’s David Batty’s number, basically.

It is certainly not a striker’s number, so Nwankwo Kanu can consider himself warned having worn it for Nigeria.

But Robson-Kanu gets the deciding vote to win this dubious honour. The forward actually credit Kanu as his inspiration for taking the number at West Brom but also admitted it was because it was the only single- digit number left and suggested it might only be for a season. Four years on, he’s still wearing it.

Scoring wonder goals at major international tournaments while technically being without a club, becoming a blockchain entrepreneur, releasing turmeric-based supplements – we get it, Hal, you’re a zany footballer. Now grow up and change to a proper number.

David Bentley’s Tottenham spell was doomed from the moment he chose the No.5, Georginio Wijnaldum goes so under the radar nobody seems to notice he’s wearing a centre-back’s shirt, and who are we to tell Zinedine Zidane he’s wrong?

Maybe we’re being a little harsh on Baros, but it’s just na.

As with four, we can accept the No.6 shirt on a centre-back (preferably) or holding midfielder (ideally one more cultured than David Batty).

It’s not for tricky wingers, even if we do have something of a soft spot for him – mainly for this goal.

Stoke deserved to go down for this.

Even worse than Steve Sidwell wearing it for Chelsea. No wonder their No.9 shirt is cursed.

Gallas is not afraid of sticking his head above the parapet to do things in his own way. Even by his standards, inheriting Arsenal’s No.10 shirt from Dennis Bergkamp was pretty bold.

Arsene Wenger later suggested giving the No.10 to a defender would avoid any lazy comparisons to Bergkamp rather than pile pressure on an attacker taking over from one of the finest forwards in the club’s history.

“No.3 was uncomfortable for him and I had given the rest of the numbers out,” he added.

A centre-back who could also operate at left-back, No.3 would have been perfect, Arsene.

Given his penchant for curling left-footed free-kicks into the top corner, we’re half-tempted to let Mihajlovic off for wearing the No.11 for much of his career as a centre-back.

It’s still wrong, but it’s still not as bad as Gallas.