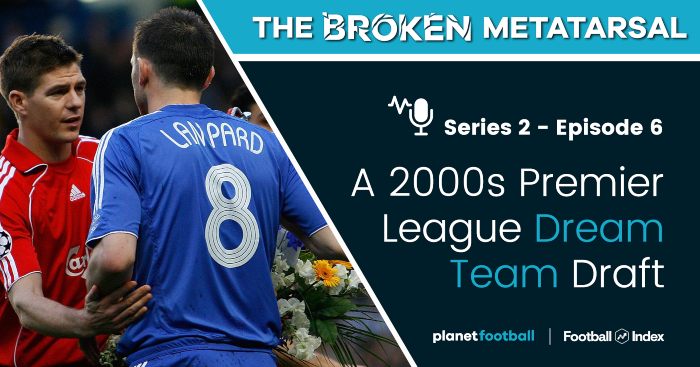 We got to witness a lot of wonderful players turn out in the Premier League in the 2000s – and four of us fought it out to name the best XI from the decade in the latest episode of The Broken Metatarsal.

For obvious reasons, we can’t get to the studio at the moment. But the show must go on so we bring you this week’s episode from the  living hell of our bedrooms.

And despite the drop in sound quality, this it’s definitely still worth a listen as Rich Williams, Mark Holmes, Rob Conlon and Pete Farries fight it out for their favourite players.

It’s a draft format so everyone gets their turn to pick first – and last – leading to some  batshit mental selections. To put it into perspective, eight strikers are picked and none of them are Ruud van Nistelrooy, Didier Drogba or Michael Owen.

There’s no guest, no interview and not even a Fact or Fiction this week, but you’re definitely still going to want to listen, if only to hear which idiots picked Paul Robinson, Henrik Larsson, Kevin Phillips and Ricardo Fuller in their teams.

Stay to the end to hear our teams in full, then send in yours (along with any abuse) on Twitter @planetfutebol