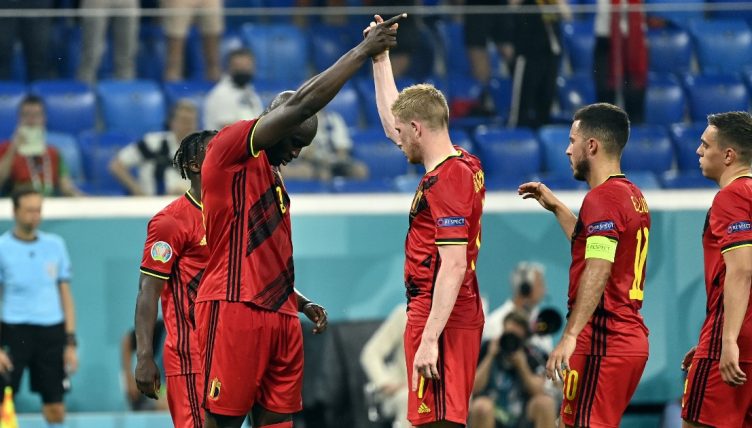 After a manic Wednesday night in the group of death, the first phase of another major international tournament drew to a close. Next up? The Euro 2020 knockout rounds.

Some mouthwatering clashes await in the last-16. Belgium take on Portugal in Seville, Wales travel back to Baku to face Denmark while the new Wembley might get to witness England beating Germany in a major tournament for the first time.

There have been some excellent individual displays throughout the 36 group stage games, with plenty of big names delivering on the grandest of stages, and we have put together an XI made up of the best performers so far…

Olsen left Everton in the summer following a loan spell with the Toffees and has started Euro 2020 like he has a point to prove.

For many, Dumfries was just a town in Scotland before Euro 2020. Now it is a name synonymous with one of the most exciting full-backs in football.

An excellent header won all three points for the Netherlands against Ukraine and a second goal against Austria confirmed their place in the last-16. A breakout star if ever there was one.

Cue many, many transfer rumours.

There was real concern at the prospect of Stones and Tyrone Mings partnering at the back for England as Harry Maguire entered the tournament with an injury. But the pair have impressed.

Stones, however, edges his way into this XI after playing the full 90 minutes in all three matches, keeping three clean sheets along the way.

You still should have scored that header against Scotland, John.

While the likes of Alexander Isak and Emil Forsberg did the business in attack for Sweden and grabbed most of the headlines, it was a rock-solid defensive unit that allowed the frontline to flourish.

Danielson has been a colossus in their opening three games, making 11 clearances and three interceptions against Spain before bossing his back-line to another clean sheet against Slovakia.

The 32-year-old was eventually undone twice by Robert Lewandowski, but there’s no shame in that.

The only player in the German squad to have never played in Germany. That hasn’t stopped him being Joachim Low’s star man so far, though.

Atalanta’s prized asset showed flashes of promise against France before exploding with brilliance in the 4-2 beating of Portugal, claiming a goal and two assists.

After Antonio Rudiger ran into him in the Champions League final, De Bruyne was forced to miss Belgium’s opening 3-0 win against Russia, but he returned with a vengeance against Denmark.

Manchester City’s talisman came off the bench at half-time to play the villain against the Scandinavians, brilliantly setting up Thorgan Hazard for an equaliser before thundering in a finish of his own to complete a 2-1 comeback.

The 29-year-old was in equally brutal form against Finland, twice assisting Romelu Lukaku to score, although only one counted.

Wijnaldum has stormed into the Euros in style, seemingly determined to make Liverpool regret not giving him the right contract offer.

PSG fans will love what they have seen of the midfielder at Euro 2020, however. The Netherlands captain sits second in the goalscoring charts with three to his name already, including a brace against North Macedonia.

The Dutch emphatically topped their group with nine points and Wijnaldum might have just started practising his trophy lift.

Italy’s midfield has been the most impressive at the tournament so far and either of Locatelli, Jorginho or Nicolo Barella would have been a worthy inclusion in this side.

But we have plumped for the man who secured the Azzurri’s place in the knockout stages.

A brilliant brace from Locatelli put Switzerland to the sword in their second match in Rome and even with Marco Veratti returning to full fitness, it seems unlikely the 23-year-old will be dropped anytime soon.

We know what you’re thinking; Lukaku on the right-wing? You’re crazy!

To that, we respond: did you see him against Denmark? The Belgian’s quick feet and smart movement off the right-hand side played a huge part in both of the Red Devils’ goals. Three goals across his other two appearances made Lukaku’s place in this XI a guarantee.

The striker has been at the forefront of the Czech Republic’s impressive run to the last-16 and there won’t be a defence left in the tournament that fancies coming up against the Bayer Leverkusen man.

Can the Dutch stop him?

Just when you think Ronaldo has finally hit the final downward slope of his career, he bounces back.

The Portuguese grabbed five goals in three matches to carry his country into the knockout stages again. Three of them were from the penalty spot.

But in a tournament where six spot-kicks have already been missed, having a Penaldo in your team seems to be more important than ever.