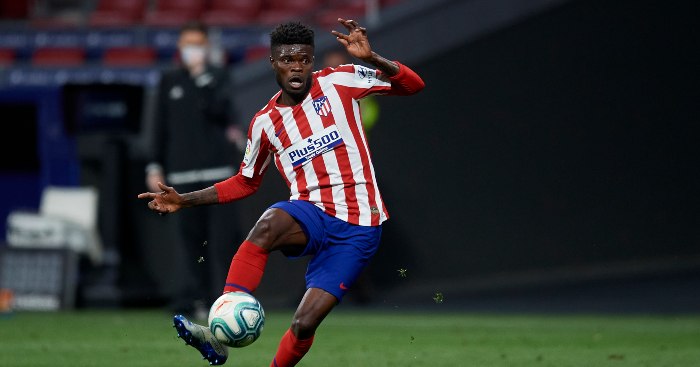 The summer transfer window presents Mikel Arteta with the first major chance to mould Arsenal‘s squad in his image as he prepares for his first full season in charge of the club.

Arsenal reportedly need to balance the books by selling – or making staff redundant – in order to buy, but they have still been linked with a host of potential incomings already this summer.

We’ve compiled an XI of eye-catching players mentioned as possible Arsenal targets this summer, arranged in a 4-3-3 formation.

Arsenal were linked with a host of goalkeepers after Bernd Leno suffered a season-ending injury against Brighton, only for Emi Martinez to shine upon a long-awaited run of games in the Premier League and FA Cup.

Barcelona stopper Neto was one of the names mooted, having failed to make an impact at the Camp Nou since becoming part of the €954million the Catalan giants have spunked in the last five years.

It seems unlikely Arsenal will strengthen their squad with a goalkeeper, although Martinez, who attracted interest from Leeds United prior to his chance in Arteta’s starting XI, has suggested he could leave north London if he is not given further first-team opportunities next term.

Emi Martinez: “I showed that I can play, I need to play more games next season. I want to establish myself at Arsenal & become first choice. If I don’t play, I’m going to move. I’m going to go where I play more” pic.twitter.com/JBBfgepWJh

Again, right-back does not seem like an area Arsenal will be desperate to strengthen given they already have Hector Bellerin and Cedric Soares – and even Ainsley Maitland-Niles – to fill the position.

But Aarons, like Norwich City team-mate Jamal Lewis, has been linked with pretty much every top club in the country after impressing for the Canaries despite their relegation from the Premier League.

Football.london tipped Arsenal to ‘hijack £30m Tottenham transfer’ in a move for the 20-year-old back in April, but that report appears to be based on bookies’ odds, so don’t get your hopes up.

Another name linked with every top club under the sun over the past 12 months, Upamecano was mentioned as an Arsenal target last summer, only for the defender to remain with RB Leipzig.

In June, the Daily Mirror published a story suggesting AC Milan have missed out on the centre-back after RB Leipzig ‘promised’ Arsenal he would be on the way to the Emirates, citing ‘reports in Italy’.

Despite our scepticism around the Upamecano ‘deal’, centre-back remains an obvious area for improvement for Arteta. The return of William Saliba from his loan spell at Saint-Etienne should help in that regard but potential exits for Shkodran Mustafi, Rob Holding or Sokratis could open the door for additional reinforcements.

It remains to be seen whether Roma will pay Manchester United’s asking price for Smalling, prompting reports – most notably from Corriere dello Sport – that Arsenal could enter the race to sign the England international, having also been linked with Manchester City’s John Stones.

Kieran Tierney has already made himself a fan favourite at Arsenal, while Ainsley Maitland-Niles impressed at left wing-back in the FA Cup final and Bukayo Saka has filled in admirably, suggesting this is not exactly a problem position for the Gunners even if Sead Kolasinac departs.

Tagliafico has been in-demand since his exploits as part of the Ajax team which reached last season’s Champions League semi-final and was mentioned as a potential Arsenal target in May by that bastion of reliable news, The Sun…

“Houssem Aouar? When you have great players in the squad, it is quite logical that other bigger teams and with greater economic power come to seek the players,” Lyon sporting director Juninho recently told RMC. “There is a risk of losing important players.”

Aouar has been considered a hot prospect for a number of years now – Arsenal were also linked in 2018 – but it is clear he could be sold this summer.

L’Equipe suggest Pep Guardiola is a huge admirer of the 22-year-old, although Manchester City’s signing of Ferran Torres could open the door for Arsenal to make a move. Juventus are also reportedly interested.

He’s absolutely the one Arsenal want because David Ornstein says so.

We hadn’t heard of him until Monday, which is more a reflection of us than Sanson, given he’s made over 100 appearances for Marseille across the past three years (our eyes are usually drawn to Dimitri Payet tbf).

French journalist Alexis Bernard has claimed Arsenal have made an enquiry about Sanson, who only has one year left on his deal in the south of France and has been mooted as a potential replacement for the world’s most pointless bad boy, Matteo Guendouzi.

Sanson has also been linked with Tottenham, Newcastle and West Ham, so we’re going to suggest his agent has really been putting the hours in these last few weeks.

Who is Morgan Sanson?

They’ve got him, it just hasn’t been officially announced yet. No idea if he’ll be any good or not, but Kia Joorabchian will be happy at least and that’s all that apparently matters.

The Celtic striker has plenty of suitors thanks to his exploits for Celtic over the past three season. But while he is being linked with the likes of Arsenal and Manchester United, he’s also being linked with Aston Villa and Brighton.

Watching Coutinho get whored around Europe this year has been quite sad really, hasn’t it?

If Arsenal really want an attacking midfielder on a huge salary whose career is at a crossroads, they’re already well stocked in that department.