An XI of players that could miss the 2022 World Cup: Ronaldo, Salah… 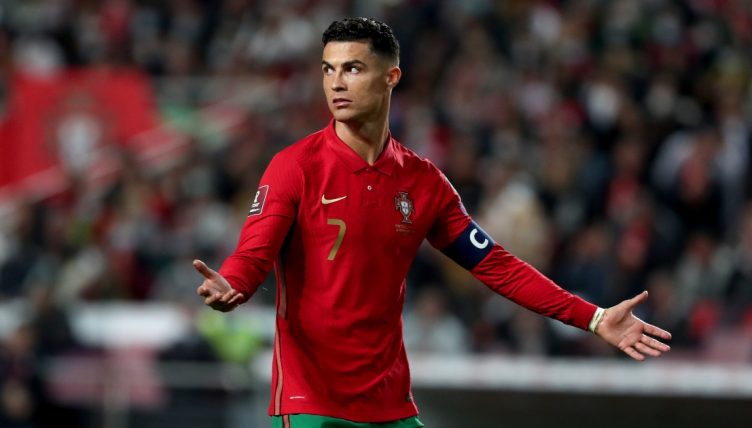 The last international break of 2021 is finished and 13 nations have now booked their place at Qatar 2022 – including Brazil, England, France and Spain.

The recent matches also had some casualties; Erling Haaland’s Norway won’t be at the World Cup next winter, while a star-studded Ivory Coast were eliminated after a 1-0 defeat to Cameroon.

But, for many other nations, hopes of qualification remain in the balance. 12 European nations face two play-offs for their remaining three slots while Africa’s finest face a brutal two-legged tie to reach Qatar.

We’ve compiled an XI of players who could miss out on playing at next year’s tournament. They represent 10 nations and line-up in a 4-3-3 formation.

But their form has been patchy since; defeat in the Nations League against Spain was sandwiched between fatal draws against Bulgaria, Switzerland and Northern Ireland in World Cup qualifying.

After finishing two points behind Switzerland, Italy must go through the UEFA play-offs to reach Qatar. They’ll be seeded in the semi-finals and will still fancy their chances of progressing.

But Italy were absent from Russia in 2018 after losing a play-off against Sweden and they’ve got four months to spend reminiscing about that particular failure.

Morocco are one of the highest-ranked countries in Africa and their squad, which includes the likes of Hakim Ziyech, Adel Tarbaat and Youssef En-Nesyri, comfortably reached the final stages of African qualifying.

But Hakimi remains the star. The 24-year-old has already played for Real Madrid, Inter Milan and PSG and is widely regarded as one of the best right-backs in world football.

The Atlas Lions will be one of five seeded teams in March’s play-offs and will face one of Egypt, Cameroon, Ghana, Mali or DR Congo as they look to reach the World Cup.

After being denied a place in the round of 16 in 2018 because they received more yellow cards than Japan, Senegal will be desperate to make amends at next year’s event.

A richly-talented squad that boasts quality in all areas would be a dark horse at the 2022 finals but the Senegalese have never qualified for consecutive World Cups and will need to overcome a play-off to end that run.

Koulibaly, who captains the side, has long been described as one of world football’s best centre-backs and will be confident of leading his nation to the Middle East next winter.

One of the highlights of this summer’s Euros was Chiellini spooking Jordi Alba before Italy’s penalty shoot-out win over Spain in the semis.

It goes without saying that next year’s tournament would be poorer in his absence but Chiellini, who appeared for the Azurri in the 2010 and 2014 finals, will need to help his country overcome their post-Euro hangover to be there.

Italy have never missed consecutive World Cups and we can’t imagine the 37-year-old intends to let that run end on his watch.

Scotland are one of the most improved nations in European football, benefiting from a group of players that play Premier League football every week, and will enter March’s play-offs as the second highest-ranked seed.

Liverpool full-back Robertson captains the side and clearly loves playing for his country. “We don’t want to be sitting at home when the World Cup is going on,” he said before the win over Moldova, “or any more Euros going on. We want to be there.”

With Steve Clarke managing to incorporate Arsenal’s Kieran Tierney in the same line-up, the Tartan Army have just allowed themselves to dream of a trip to the Gulf in November 2022.

Austria gave a good impression of themselves at the Euros, taking winners Italy to extra-time in the last 16, but only qualified for the play-offs via their Nations League performances.

Alaba remains their finest player and has slotted in well at Real Madrid. You sense Austria will need him at his best to reach their final World Cup finals since 1998.

He may not perform for Portugal as he does for Manchester United but Fernandes remains a classy operator and one of the world’s best midfielders on his day.

The 27-year-old faces competition from the likes of Bernardo Silva and Joao Felix and found himself dropped by Fernando Santos during Euro 2020.

But he has created more chances than any other player during this season’s Champions League and will still have a role to play in Portugal’s play-offs next March.

Theo Walcott doesn’t strike us as a stereotypical talkSPORT pundit but, in an interview with the station, he backed former team-mate Ramsey to return to the Premier League in January.

“I feel like he would want to, and part of me thinks he would love to come back to Arsenal, something about that would tick a box,” Walcott said.

“He’s at Juventus, he played very well for Wales last night which is really good to see, obviously a lot of people have been on his back in Italy.”

With Wales awaiting their first World Cup play-off since 1958, it may be in Ramsey’s interest to seek regular first-team football in the months leading up to it.

The Juventus midfielder impressed in Euro 2016 and Euro 2020 and is an integral part of a buoyant Wales side.

Egypt stunk out the last World Cup, losing all three matches and finishing with the second-worst record of any team in the tournament.

Their failure three years ago explains why they’ll be unseeded in Africa’s final round of qualifiers but any side with Salah in their ranks has a punching chance of winning any game.

Lewandowski scored three goals at Euro 2020 but was unable to prevent Poland from finishing bottom of their group.

The Bayern Munich striker is widely regarded as the best striker in the world, having scored over 50 goals in 2021 alone, and will carry the hopes of his nation on his shoulders next March.

Poland finished second behind England in their qualifying group and will face one of Portugal, Scotland, Italy, Russia, Sweden or Wales in their semi-final next year.

Part of us wants to see Ronaldo appear in his final World Cup.

A slightly larger part of us wants to see how he’d react if Portugal fail to negotiate next year’s play-offs.

Portugal’s loss to Serbia on Sunday means they have to go through a playoff rather than an automatic World Cup qualification.