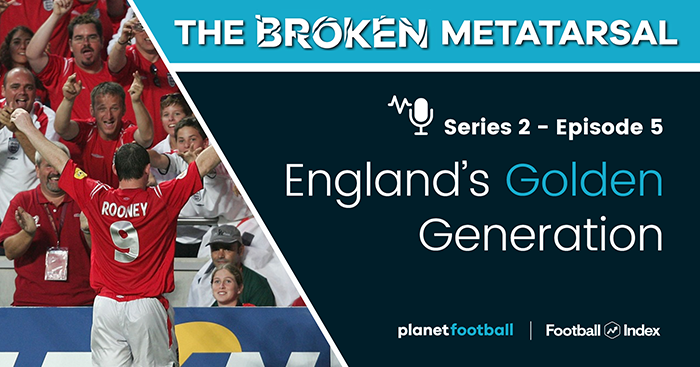 England’s Golden Generation weren’t able to deliver any actual success – but they did provide some brilliant memories which we remember in the latest episode of The Broken Metatarsal.

Focusing on Sven-Goran Eriksson’s reign from 2001 through to the 2006 World Cup, Rich Williams, Mark Holmes, Rob Conlon and this week’s guest, comedian and Crystal Palace fan Chloe Petts, remember the highs and lows of those five years, from the 5-1 in Germany and David Beckham’s free-kick against Greece to the emergence of Wayne Rooney but ultimately the same old crushing disappointment on penalties.

Paul Konchesky joins on the phone to reveal what it was like stepping into the England camp on a couple of occasions during that period, including as a debutant alongside Rooney in 2003. The former Charlton, West Ham and Fulham left-back also tells a familiar story of cliques in the squad – and how the captain was king at mealtimes.

As always, we finish with an episode of Fact or Fiction in which Rich tries to work out which of the unlikely stories about the Golden Generation is, in fact, true.