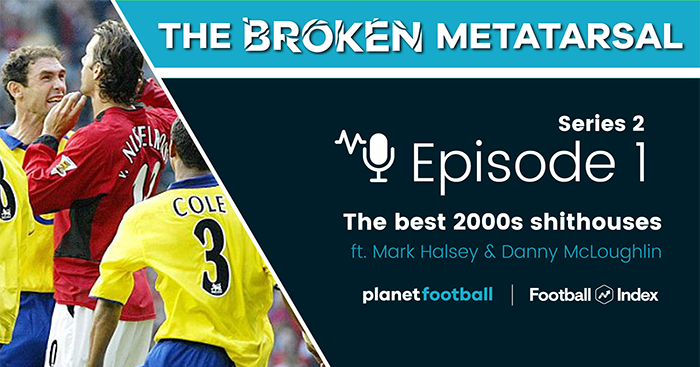 As if you didn’t know already, we really love football’s shithouses. So of course we’ve started series two of The Broken Metatarsal with a celebration of our favourite shithouses of the 2000s.

We can’t quite believe it, but apparently enough of you mad lot enjoyed us talking nonsense about noughties football last year that we’ve been allowed to do another series.

Much of that is down to the fact that Football Index continue to support us so please sign up for their exclusive Planet Football reader offer to get a seven-day £1000 money-back guarantee. You never know, we might even get a third series.

Anyway, Rich Williams, Mark Holmes and Rob Conlon are back and are joined by comedian Danny McLoughlin, who you might also remember from series one, as we reminisce about the players everyone loves to hate – or just love in our case: the shithouses.

Sergio Ramos justified his inclusion as King Shithouse with an extremely on-brand red card the night before we went live with this pod, but he certainly wasn’t the only player up to no good in the 2000s – Mark van Bommel, Kevin Nolan, David Batty, Rivaldo, Alan Smith, Marco Materazzi and Gennaro Gattuso also all get a namecheck.

Rich and Mark also spoke to former Premier League referee Mark Halsey on the phone to find out which characters sprung to his mind when thinking about difficult personalities to manage.

And there were no great surprises, with Cristiano Ronaldo, Wayne Rooney, Sol Campbell, Neil Warnock, Danny Mills, Robbie Savage and John Terry all getting a mention for various reasons.

Now you know what to expect, listen to the latest episode in all its glory below.