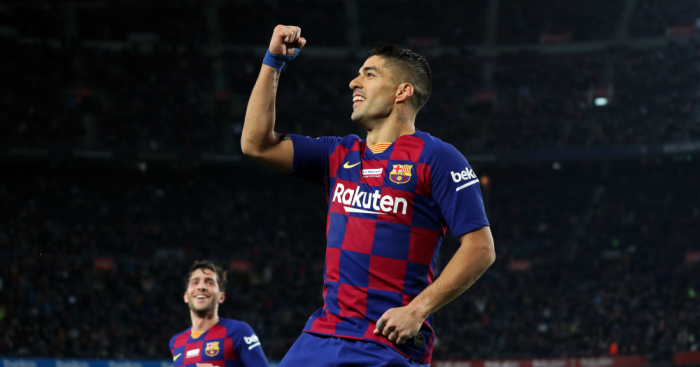 We all know a great goal when we see one. But, if we’re asked to explain, our minds go blanker than Monty Panesar’s during his appearance on Mastermind.

We know that Luis Suarez scored one for Barcelona last season. On the same weekend, Tottenham‘s Son Heung-min left the Burnley defence trailing behind him in scenes reminiscent of a Benny Hill sketch – but which is better? It’s one of life’s great existential questions.

We’ve attempted to rank all 10 Puskas award nominees, on the completely scientific basis of which we liked the most.

Reminiscent of Tugay’s banger against Fulham from 2005, we feel extremely harsh ranking this at the bottom.

But even if Sir Alex Ferguson managed every team in the Premier League, three would still be relegated every season.

Somebody has to go bottom, and this goal tickled us the least. Full marks to the commentator’s Jonathan Pearce tribute act though.

The Puskas Award nominees: a thread 🤤

Great effort from  Quinonez here, showing the ingenuity of Bart Simpson and the execution of David Beckham.

It’s probably a product of our spoilt tastes that we’ve almost become immune to this type of goal. Like a demanding boss, we’re looking for something more unique to top our list.

Leonel Quinonez with the quick thinking and perfect execution 👏pic.twitter.com/ln36DJBW3C

There’s something about Chelsea vs Arsenal fixtures that attracts bangers, and this has the added bonus of the camera angle being perfectly in line with the arc of the half-volley.

You can never get tired of a good half-volley, surely?

This goal is the footballing equivalent of Coca-Cola.

When consumed for the first time, the brown nectar is the sweetest taste known to man. When taste buds mature and palettes expand, however, the sensation is not quite the same.

What we’re trying to say is that the goal is great but among such illustrious company it becomes less remarkable.

Like your mum entering the house with a surprise takeaway, or discovering a show on Netflix with five series worth of episodes, any list where this overhead kick places no higher than seventh can only be a good thing.

We loved how far out De Arrascaeta was and the looping nature of the finish, but, channelling our inner Alan Hansen, just where was the defending?

It also made this writer pine for Andy Carroll’s similar effort against Crystal Palace, which cannot be healthy.

The long-range piledriver is football’s most achievable Great Goal. Look no further than the plethora of such efforts on park pitches across the country. Essentially, it is hitting the ball very, very hard from a distance.

Something being obvious doesn’t make it any less spectacular. Exhibit A? This goal from South Africa, something we’re legally obliged to react to with the phrase ‘pick that one out’.

Any goal that conjures the voice of Andy Gray inside our head should not be encouraged though, and we need some justification for only ranking this sixth, so there we go.

Told you we used a scientific method.

There was no stopping this from Hlompho Kekana 💥pic.twitter.com/mF2hjgG2sm

Mexico is such a passionate football hotbed that it’s surprising more European players don’t take the plunge and play there. In this respect, Gignac is a true trendsetter.

Even more unique is this finish, an acrobatic homage to Jackie Chan that we’d scoff at if attempted during a Hollywood film.

And it was to complete a hat-trick, too 👏pic.twitter.com/3ZEf2oVu2T

There seems to be a League of Ireland nominee for this award every year, which is probably something Interpol should look into.

When the offerings from the Emerald Isle are this delicious, we say keep them coming.

Flores’ strike only suffers here due to our suspicion that he could never, ever replicate this moment. In some ways, that makes this goal even more special but we’re in a picky mood.

This goal is cheekier than a baboon jumping on your car bonnet while eating a stolen bag of peanuts. Delicious.

This should be number one in any other list, except this one. Sorry, Luis.

Hit ❤️ if this is your favourite!pic.twitter.com/Uk4PTArtin

As football mourns the passing of Diego Maradona, it only seems fitting that the goal that reminds us most of him should be top of our list.

Plus, Son’s effort is really really good. One can only imagine Sean Dyche’s face, as his defence is left looking as flat-footed as Wile E. Coyote chasing the Road Runner, looking similar to his expression when surveying the Grand Canyon.

That’s it. That’s the tweet.pic.twitter.com/tuLi0X4Rdg