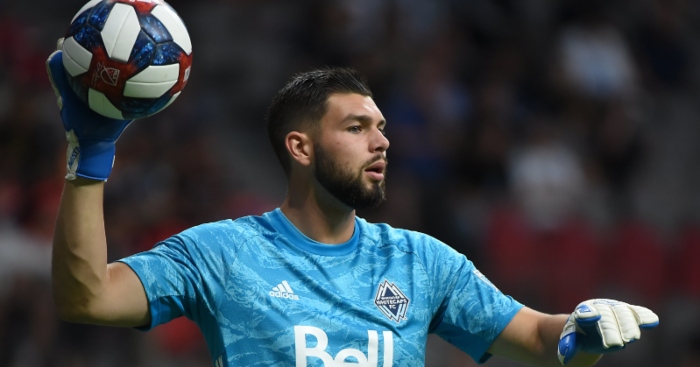 Vancouver Whitecaps lost 3-1 in San Jose to see their already-slim MLS play-off hopes deteriorate even further, but there was one saving grace in the form of goalkeeper Maxime Crépeau.

The Canada international pulled off an astonishing 15 saves, equalling a league record which has stood for 22 years. Initially the figure was reported as 16, though it seems one of those has been downgraded from a save to a claim. Still pretty good, though, we’re sure you’ll agree.

To put the figures into context, Tim Howard pulled off 17 saves in 120 minutes during the USA’s match against Belgium at the 2014 World Cup – Crépeau did all of this in just 90.

Of course, this is the internet, and we’re not allowed to simply watch a great achievement and leave it at that.

Instead, we’ve decided to rank each and every one, from worst to best. Because we can.

First, though, we’ll let you enjoy the montage. Because what’s sport without montages?

😲 S I X T E E N 😲@MaxCrepeau broke the record for the MOST SAVES in a single game in MLS history! 👏 pic.twitter.com/0b3NeKwRUc

As discussed, this is more of a claim than a save. We don’t want to confuse anyone going by the numbers in the video above, though, so it stays.

A good claim, but importantly not a save, so it has to settle for last place.

A comfortable low stop from a shot which shouldn’t cause a competent goalkeeper too many problems. Loses a fraction of a point for bouncing out from his body, like a gymnast not quite sticking the landing.

In many ways, it’s miraculous that none of Crépeau’s stops resulted in a San Jose player tucking away the rebound.

He was largely able to hold the ball or push it away from danger, but this was as close as he came to presenting another opportunity right away.

Had he turned it behind for a corner, this would be much higher on the list.

A calm hold from a low drilled effort, at a stage in the game where the goalkeeper would have been well within his rights to turn to his defenders and ask, “What the f*ck, guys?”

Needed to be on the ball as a shot came in low with bodies blocking his view, and did what he had to do.

He has a lot of time to eye up this effort from Vako Qazaishvili as the Georgian cuts in from the left, and he’d have been upset if the rising drive had caused him any real problems. One for the cameras.

No goalkeeper has any right to stand firm like this after such a busy afternoon. Crépeau’s defenders might be desperately sliding in to try to deny Chris Wondolowski, but the Canadian has a personal score to settle after conceding to Wondo in the first half.

On one hand, the shot could have been placed better, but on the other hand the US international striker could be forgiven for thinking all he needed to do was hit the target.

A stinging drive from wide on the right could easily have gone straight through a weaker goalkeeper, but there was no danger of that happening here. A strong block, sending the ball out of the way of danger.

Sure, this one looks routine at first glance, but Cristian Espinoza’s shot dips very late and failure to make the ball stick would almost certainly bring about another Quakes goal.

Sometimes an unglamorous stop is a bigger deal than an acrobatic one.

This was too fast for the camera so it’d feel remiss not to give Crépeau some credit for the stop.

The stop itself is only half the battle here, with a quick free-kick catching out a sleeping defence. Without the work of a goalkeeper dong the jobs of several men, this would be a surefire goal.

Another where the footwork is just as important as the block, with Crépeau on his toes as a corner goes past everyone until Wondolowski meets it with a stooping header at the back post.

Could he have made things easier for himself by coming off his line to claim the original cross? Perhaps, but then we wouldn’t be writing about his record number of saves. Maxime 1, you 0.

The bravery required to dive at the feet of Wondolowski is the sort of thing you might feel deserves some reward at the end of it all.

The Caps defenders who forced their goalkeeper into action eight further times don’t seem to agree with you.

Inside the first five minutes, this one. The reflexes required to deny Guram Kashia after the defender diverted Wondo’s header are impressive as hell, and came with the scores still level at 0-0.

DId we mention Vancouver actually took the lead in this game. We’re as amazed as you are.

Speaking of directional changes, This Qazaishvili effort skips up wickedly after taking a touch off Doneil Henry, and is – if we’re being honest – supposed to fly into the roof of the net. You already know why that wasn’t the end result.

This game could have realistically ended 10-1 and you still wouldn’t have been able to blame Crépeau for the result. We just hope he was on a per-save bonus.

Saving the best until last almost feels like a waste until you realise the record was at stake. Did Crépeau know about Meola’s high-score going into the game? We hope not, because that would imply a huge lack of faith in his back-line, even if the Caps have one of the worst defensive records in the league.

The slightest of fingertips helped him turn Florian Jungwirth’s effort onto the bar, when we’d have had no problem just standing there and watching the ball hit the back of the net. That’s why we don’t play professional football.